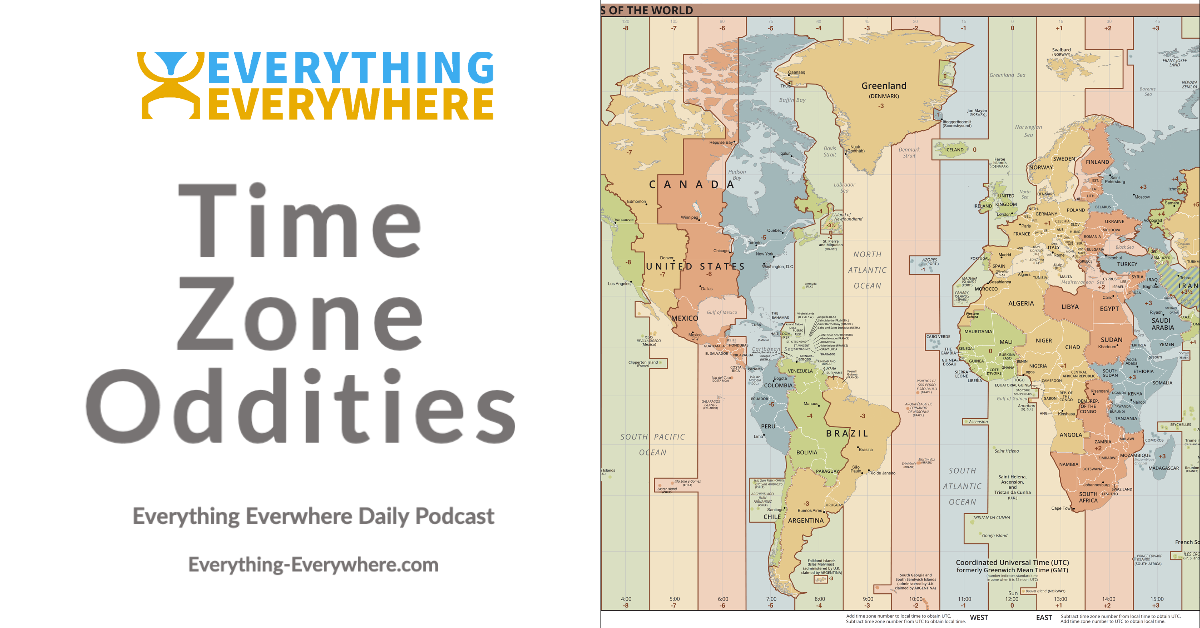 Before we created time zones, every village, town, and city had their own local time. You’d set the town’s clock according to when the sun was at its highest point each day, and everything was fine.

Eventually, life got faster. Trains began moving between towns and small differences in time began to cause problems.

This eventually led to the creation of time zones, so we could get everyone in the world on the same page as far as what time it is.

Of course, we can’t have nice things, and a simple thing like time zones became really complicated.

Learn just how complicated things have become on this episode of Everything Everywhere Daily.

For most of human history we didn’t have time zones nor did we have a need for time zones.  The distances between places and the speed people could travel meant that small differences in time between communities really didn’t matter, so each Community could have their own local time based on solar noon and no one was any the wiser.

This all changed with the advent of railroads. They allowed you to travel between two communities much faster than was previously possible and those small differences between times in communities suddenly began to become problematic.

Railroads eventually sort of solved this problem by creating their own standard time system for each railroad. This was known as Railway Time. The first railway to do this was the Great Western Railway in England in 1840.

If you wanted to take different trains run by different railways, you needed to know what the time was for each company. This lead to railway stations often keeping multiple clocks for each company, which was not an elegant solution.

What was needed was a coordinated standard time for everyone. In Britain, this was relatively easy given the size of the country and the fact that it mostly runs north/south. In 1852 the Greenwich Observatory began sending out time signals via telegraph, which allowed the entire country to start using the same time, even though this unified time wasn’t codified into British law until 1880.

By the way, the first country to legally have a unified time zone was New Zealand, which adopted a single time zone in 1868.

In the United States, it was a bit more problematic. The country was big, and by the time railroads started to cross the continent in the 1860s, the issue of coordinating time became a real problem.

The first time zone system adopted in North America was proposed by William F. Allen who was the editor of the Traveler’s Official Railway Guide. American and Canadian railroads adopted the system on November 18, 1883, but it had several problems, not the least of which was that the borders of the time zones ran through major cities, and often right through the railroad stations. Splitting up cities into different time zones just wasn’t going to work in the long run.

While the borders of the zones were eventually moved to rural areas and adjusted, the 5 time zones it created is the basic time zone set up is what we use today in North America. Atlantic (then called Intercolonial), Eastern, Central, Mountain, and Pacific.

By 1884, the vast majority of the cities in both the US and Canda were using the time zone system even though it didn’t become law in the US until 1918.

The father of worldwide time zones is Canadian Sir Sandford Fleming, who proposed a global time zone system in 1879. By 1900, most places in the world had adopted some sort of standard time zone, offset from Greenwich Mean Time by some even number of hours.

However, there is no global body that mandates time zones. Every country and many regions can still determine their own local time. This leads to some very big exceptions to the clean 1 hour per 15 degrees of longitude that you would expect.

Let’s start with an obvious one: Spain.

If you look at a time zone map, it is pretty obvious that Spain is in the wrong time zone. Spain is directly south of the UK and prime meridian runs directly through it, but Spain is in the same time zone as Germany and Poland. The result is that sunrise and sunset are both really late in Spain.

The Spanish tradition of having dinner very late comes from being in the wrong time zone.

The reason why Spain’s clocks are they way they are is due to Generalissimo Francisco Franco, who in a show of unity with German in 1940, moved their clocks ahead one hour so they were on the same time.

After the war was over, and well after Franco died, Spain just never set their clocks back. There has been talk of changing time zones, but so far nothing has been done.

China is a huge country, but the entire country is a single time zone, centered around Beijing. Because everyone is on the same clock, you have massive differences in when the sun rises and sets.

If you cross the border from China to Afghanistan, there is a 3 ½ hour time change, the largest for any border crossing in the world.

On the other end of the spectrum, Russia has 11 time zones, with a full 10 hour difference between the far east and far west in Russia. They tried collapsing them into just 9 time zones to make things simpler, but they reverted back 11 time zones after people complained.

One thing that makes time zones really complicated is daylight savings time. This is something that is mostly done in places that are in extreme northern or southern latitudes. I’m sure most of you are familiar with the concept. You jump ahead an hour in the spring and fall back one hour in the fall.

Except, of course, there are some places that make it difficult. Like I said before, we can’t have nice things.

Up in Canada, Saskatchewan doesn’t observe daylight savings at all, and in the Yukon Territory, they don’t observe standard time. They jumped ahead an hour in March 2020, and they are no longer going to jump back.

Down in Australia, they normally have three time zones, except that the southernmost states of South Australia, Tasmania, Victoria, and New South Wales all observe daylight savings, but Queensland, the Northern Territory,  Western Australia do not, meaning that they go from 3 to 5 time zones.

Recently the country of Samoa switched which side of the international dateline they were on. In 2011, Samoa went from December 29 directly to December 31, totally skipping December 30 because they moved which side of the dateline they were on. They had more business and cultural connections with New Zealand and other countries on that side of the line, so they decided to switch to make things easier. Of course, they are now on a totally different day as nearby American Samoa, but I’ll leave that for another episode.

On a personal note, I once missed a flight from Samoa to Tonga back in 2007 I misread my ticket because of the date change, so I support fully Samoa in this effort.

Are you totally confused yet? Because I haven’t yet even gotten to my biggest pet peeve.

For the life of me, I do not understand why these exist, but they do.

The island of Newfoundland is one half-hour ahead of Atlantic Time in Canada.

The, however, has to be Nepal, which has its own special time zone which is plus five hours and 45 minutes from GMT. They couldn’t even be like their neighbors with half-hour time zones.

Thankfully, what was a logistical nightmare for the world traveler is now just a matter of flicking a switch on your smartphone, and you don’t have to worry about anything.