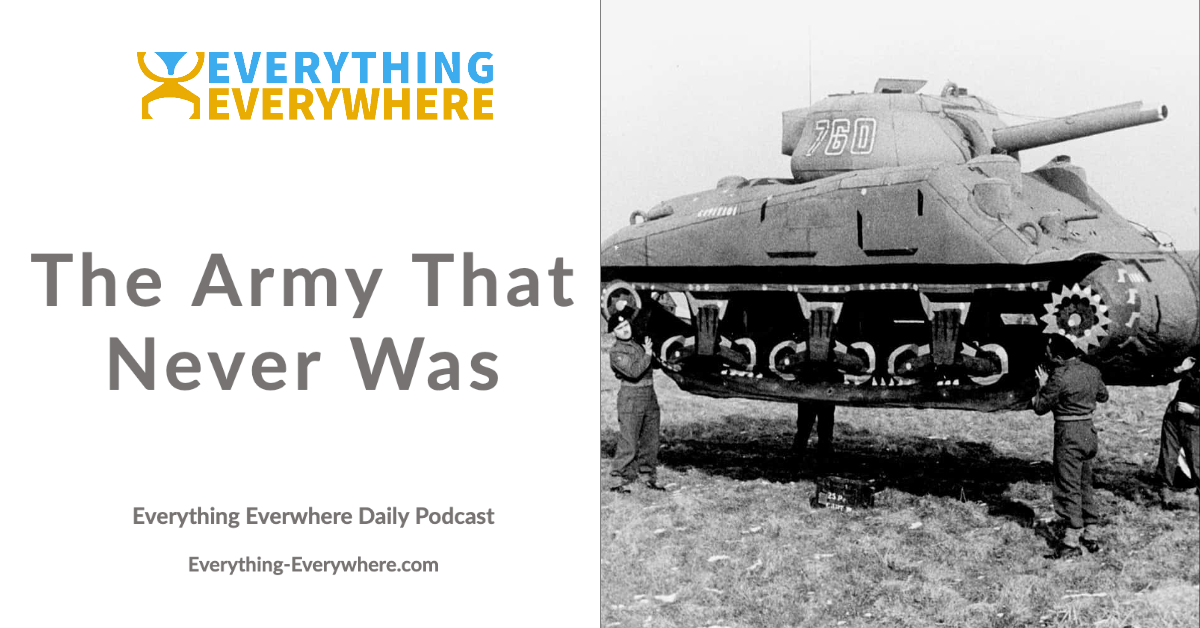 Bluffing is one of the most important aspects of playing poker. In any strategic game, in fact, deception can be critical to success.

Warfare is no different. Deceiving an enemy can often mean the difference between winning and losing. Between life and death.

During WWII, the allied forces unleashed the largest and most complicated deception in military history. A deception which resulted in the success of the Allied invasion of Europe, and saved thousands, if not tens of thousands of lives.

Learn more about the entire Army which never existed on this episode of Everything Everywhere Daily.

Operation Overlord, the Allied invasion of Europe, was the greatest amphibious invasion in history.

It was also one of the greatest risks every taken in history. Amphibious invasions are extremely difficult. You have to fight in the water against a well-fortified force on the land. The defending forces have every advantage, and the attacking forces have almost none.

None, that is, other than the benefit of surprise.

In the lead up to the invasion of Normandy, the Allies knew they had to make the Germans commit their forces somewhere else to allow the real invasion to be a success.

To achieve this they launched Operations Fortitude.

Operation Fortitude was split into Fortitude North and Fortitude South. Fortitude South was to convince the Germans that the real allied invasion was going to come from Southeast England and invade Calais in France. This was the shortest distance across the English Channel, and an invasion here made lots of sense from a strategic standpoint.

Fortitude North was to convince the Germans that an invasion from Scotland was going to land in Norway.

The story which the Allies wanted the Germans to think and act upon was that the Allies would create a diversionary landing in Normany sometime in the summer of 1944, which would draw German troops away from the real landing which was to take place in Calais, just 20 miles from the Cliffs of Dover.

In reality, the Normandy invasion was the real invasion, and the threat of invading Calais was just a ruse.

To pull this off, the Allies had to really commit to the deception. It wasn’t enough to send a couple of fake radio messages. They needed to make the Germans really think that they were assembling a huge force in southeast England.

The first thing they did was to create an entire Army Group. The First US Army Group was established, and it only existed on paper. This was going to be the basis of the deception. There were also multiple other armies, divisions, and corps underneath this group.

The First US Army Group had its own insignia created, as well as its own patches and everything else that a real army would have. A small number of soldiers who would be seen in public were all given these and they were placed on their uniforms.

The second big thing they did was to put their most successful general as the head of the army: George S. Patton.

Patton had fought the Germans with a great deal of success in North Africa and Sicily. They were convinced that he was the greatest allied general and would be given control of the bulk of the allied forces when the invasion took place.

In reality, Patton was in trouble for slapping a soldier in Sicily and he was given command of the fake army as a punishment. In some ways was a double feint, in that the Germans never could have believed that the best Allied general could possibly be disciplined for slapping a common soldier.

This is masterfully depicted in the Academy Award-winning 1970 film Patton. If you’ve never seen it I highly recommend it, as it is one of the best character studies ever put to film.

There was several major parts of the deception.

The first was double agents. The Germans did a horrible job of infiltrating both Britain and America. The agents they had in place at the beginning of the war were discovered quickly and most of them turned into double agents. This was part of the famous British Double-Cross System. While originally created as a system of counter-espionage, it found its greatest success as a vehicle for disinformation.

The second part was fake radio traffic. Radio operators would send out fake messages associated with the fake units.

The other major thing was to create an actual fake army. Camps sprung up all over southeast England. Some of them contained actual soldiers who would be used in the Normandy invasion, albeit not in the first wave, and the rest were fake units.

The deception needed to fool German reconnaissance planes which may have been flying over England at 33,000 feet or higher. From that distance, you can’t see details, so the fakes didn’t have to be very good.

This lead to the creation of inflatable tanks, and ships made out of wood and canvas. They just had to look real from far away. They carried through with the deception by moving the fake vehicles around, interspersing them with real tanks, and even creating fake tread marks for the fake tanks, just so they could be seen from a distance.

They also created fake information among the community which could be spread by diplomats in Spain and other neutral countries. Real soldiers with First Army Group patches were sent on leave could they could be seen. Fake complaint letters by local citizens were published in small newspapers.

The deception worked. The British at Betchley Park had decrypted the German enigma machine which was used to encode their communications. They knew that the German high command, all the way up to Hitler actually thought the main invasion was going to happen in Calais.

On June 6, 1944, when the allies landed in Normandy, the Germans did not move their sizable force from Calais because they believed the main invasion was still to come there.

After D-Day, the deception didn’t stop. They still needed to keep it going so the forces that landed in Normandy would have time and breathing room to establish a foothold.

On June 9, reports were intercepted that showed Hitler was diverting troops to Calais because he still thought that the Normandy invasion was a diversion.

Operation Fortitude continued through to September, but by mid-August had rolled around it didn’t really matter anymore. Patton and his very real Third Army Group had cut through France, Paris was liberated, and the Allies were on their way to Berlin.

It is terrifying to imagine what would have happened if the deception didn’t work. The Normandy invasion might have failed. There wouldn’t have been a second front opened up in the war, and the entire course of the war would have changed.

The Normandy invasion owes its success to the brave fake men and women of the greatest fake fighting force the world has never known: The US First Army Group.