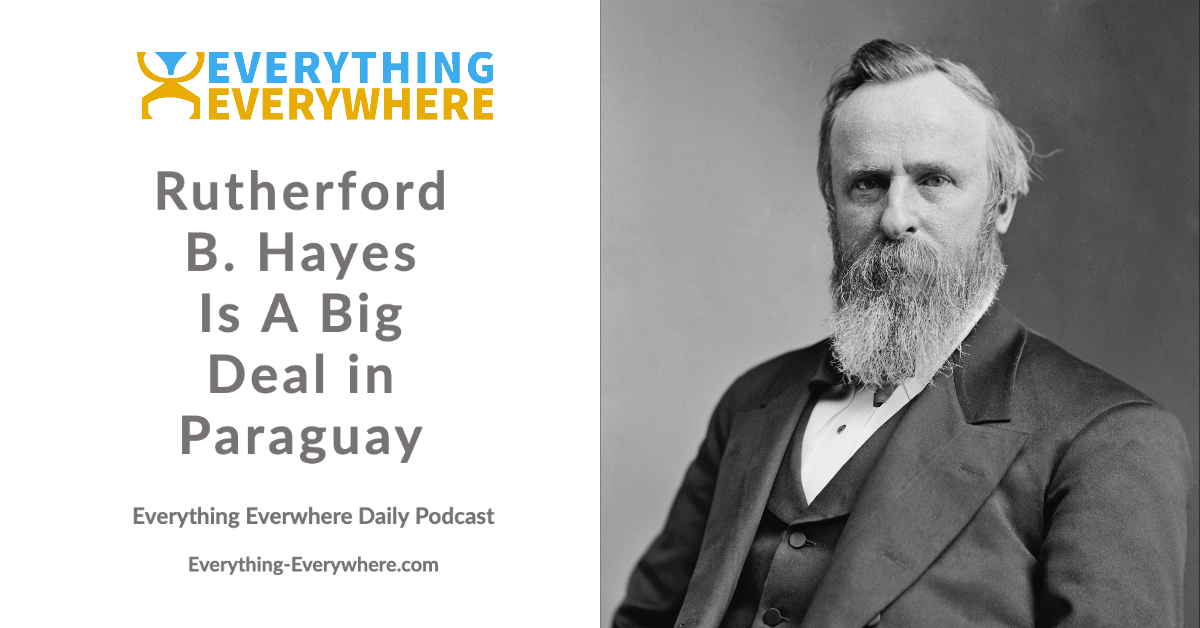 Rutherford Birchard Hayes was the 19th president of the United States.

He is famous for being the second person to win the presidency without winning the popular vote, and he won in the electoral college by a single vote. The whole election was so shady, he earned the nickname Rutherfraud.

Beyond that, there isn’t a whole lot that people remember about the Hayes administration. There isn’t much in the United States named after President Hayes.

However, in Paraguay, Rutherford B. Hayes is a really big deal.

Find out why this former US President is a bigger deal in Paraguay than he is in his home country on this episode of Everything Everywhere Daily.

Rutherford B. Hayes is a big deal in Paraguay.

To give you an idea just how big of a deal he is there, Paraguay has 17 departments, their equivalent of states. One of them is called the President Hayes Department, and it isn’t tiny. It is larger than the state of West Virginia.

The capital of the President Hayes Department is Villa Hayes, which has a population of 15,000 people.

In Villa Hayes, there is an elementary school named after the president.

In the capital city of Ascension, there is a soccer team called Club Presidente Hayes, and the team nickname is the Yankees.

There is a Rutheford B. Hayes museum, he is on postage stamps, and there is even a holiday named after him in the department that bears his name.

In the 1990s a girl who came out of a coma was granted a wish by a local television station. Her wish? To visit the Hayes Presidential Center in Fremont, Ohio

After all of this, it needs to be pointed out that never once in his life did President Hayes ever step foot in Paraguay. In fact, he never once left the United States.

So why is Paraguay such big fans of a 19th century US president? Basically, because if it wasn’t for President Hayes, Paraguay probably wouldn’t exist.

To understand how this came to be, we have to go back to the Paraguayan War, also known as the War of the Triple Alliance, which took place from 1864 to 1870, just after the US Civil War.

The Paraguayan War was one of the bloodiest wars in the western hemisphere. It was a complicated messy war with origins similar to the start of World War I.

I’ll try to summarize the war as simply as I can without getting into too much detail.

Paraguay at the time was lead by a man named Francisco Solano López. He was sort of the archetype for South American dictators who would follow him.

At the beginning of the conflict, Paraguay actually had a larger army than the combined armies of Brazil, Argentina, and Uruguay, however, their population was 22x smaller than the size of the triple alliance, and they had no access to the sea.

Paraguay and Brazil backed different sides in a conflict for power in Uruguay. When the Brazilian side became ascendant, Paraguay wanted to send forces into Uruguay to help. However, Paraguay doesn’t border Uruguay. They asked Argentina if they could march through their territory, and the Argentinians refused.

Paraguay began the war by invading Brazil, and then declared war on Argentina when they wouldn’t let them pass through their territory. The then found themselves fighting three countries at once.

After a few victories, the tied turned against the Paraguayans quickly. The war devastated Paraguay.

By the time the war was over, an estimated 60% of the population of Paraguay was dead, as were over 80% of the men in the country. Only 12% of the remaining population at the end of the war was male, and in some areas, it was as low as 5%.

Fast forward to several years after the end of the war. Paraguay had lost territory to both Brazil and Argentina. However, there was still a significant part of the country which was under dispute with the Argentinians. The disputed part was over half of what today makes up Paraguay.

In 1878 the two countries decided to get a third party arbitrator to settle the dispute. They didn’t want a European power to adjudicate as they had too much-vested interest in playing power politics. They also didn’t want another former Spanish colony to have a say as they could be biased towards one side or the other.

They eventually settled on letting the President of the United States, Rutherford B. Hayes arbitrate the dispute.

Hayes mostly decided with Paraguay and granted the majority of the territory in question to them. He rendered the decision on  Nov. 12, 1878, the day which is now celebrated as a provincial holiday in the President Hayes Department.  That land makes up 60% of the country of Paraguay today. A big chunk of the land which was ceded to Paraguay is the department that bears his name.

Some historians estimate that if the Nobel Peace Prize had been awarded at that time, Hayes probably would have been a shoe-in for it, for bringing peace to the region.

The funny thing is, despite all the love which Paraguay has for Rutherford B. Hayes, he probably spent no more than a few hours of his life thinking about this decision. Most of the work was done by his secretary of state William M. Evarts. He just signed off on whatever Evarts agreed to.

The love affair for Hayes in Paraguay perhaps isn’t as strong as it used to be. Most people aren’t aware of the history and just think of him as “some gringo President” with little idea of how is he honored.

However, for some, Rutherford B. Hayes’ memory will live on. In the words of Maria Teresa Garozzo, the director of the President Hayes Museum,  “Hayes is a giant, he is a spectacular, immortal figure for us, “We are Paraguay because of him. Hayes will never be forgotten.”