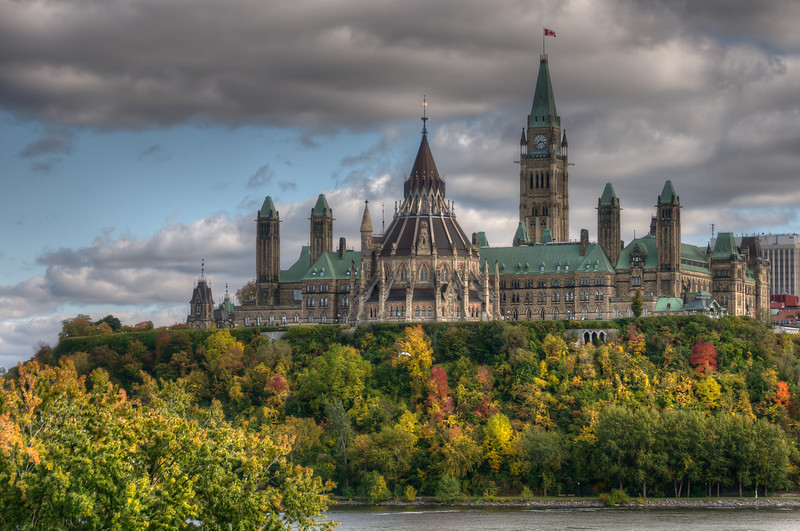 Over my more than decade of travel, Canada has featured prominently in my list of places I’ve returned to over and over again. I’ve extensively road tripped across Canada’s most incredible national parks, deeply explored the country’s UNESCO World Heritage Sites, and even visited regions of the country that few people have ever seen due to their sheer remoteness.

So when the VIA Rail, the trans Canada train system, invited me to test out its new offerings, I jumped at the chance. My train trip took place in October, and just a month earlier I had road tripped around Eastern Canada on my own, driving almost the exact same route the train would take, but in reverse: Quebec City to Toronto. On my own road trip, I was driving through after having visited Newfoundland and Labrador, so although that was not on this train route, it still provided an excellent contrast between traveling Canada by car and traveling Canada by train.

Why should you train Eastern Canada? Well, sadly, most American don’t think of Canada when it comes time to take a vacation—some of that has stemmed from the strength of the Canadian Dollar at times, but it also stems from our ignorance of things north of the border.

There are many incredible train trips in this part of the country, and the distances are not as far as you might think. The Toronto–Quebec City corridor is analogous to the Washington–Boston corridor on the East Coast of the US. It’s densely populated, the route contains some of the largest cities in the country, and they are close enough together to allow for reasonable travel times. So, let’s look at some of the best train trips in Eastern Canada, as well as the essential information you’ll need to plan a Canadian road trip!

Despite its size, Toronto is too often forgotten or overlooked by Americans visiting the country. It’s the 5th largest city in North America, and larger than every U.S. city other than New York, LA, and Chicago.

The best things to do in Toronto include: the CN Tower, Kensington Market, and Chinatown. The Queen Street West area is also one of the hippest in the city, and plan ahead which of the city’s best food trucks you’d like to sample.

The city has a number of fascinating and distinct neighborhoods, so a few days in the city to wander the skyscrapers and then find more off-the-beaten path local eateries and bars. I’d recommend starting your train trip with two solid days in Toronto, then heading onward.

There is also an arts festival in the fall known as Nuit Blanche (White Night). The festival literally goes all night long, with contemporary art exhibits located outside throughout the city. In addition to the art, there are food stands and there is, of course, lots of drinking. This is Canada after all.

Our next stop was Canada’s capital, Ottawa.

The train trip from Toronto to Ottawa was the longest leg of my entire journey around Eastern Canada, clocking in at about 4 hours. The time flew by considering we had a meal on the VIA train and were able to work on our laptops.

Ottawa has always been one of my favorite Canadian cities, and on this visit I was able to stay at the Fairmont Chateau Laurier, which is the castle-like hotel near the historic Rideau Canal and Parliament Hill. The Chateau Laurier is one of the few hotels in the world where I really wanted to stay at some point.

Visiting Parliament Hill is an interesting experience for Americans. There is only a fraction of the security you would find if you visited Capitol Hill in Washington DC. Also, there are gargoyles on the outside of the Parliament building in Ottawa, whereas in Washington the gargoyles are on the inside. :)

The other part of Ottawa I love is ByWard Market. Easy walking distance from Parliament Hill, the market is a neighborhood of boutique shops, fresh markets, delicious restaurants, and trendy bars.

Ottawa is also the home of the Canadian War Museum, National Gallery of Art, and the Canadian Museum of Civilization across the river in Hull, Quebec.

Most of the attractions in Ottawa that tourist would want to visit are within easy walking distance of each other, and like Toronto, you’ll want to be sure your train trip stops here for at least two days before moving onward.

Montreal is a truly unique city compared to other Eastern Canadian cities.

I had never traveled to Montreal prior to 2010. On my drive back from Newfoundland, I only passed through town for a few hours to have lunch with a reader.

This time our slow train journey gave us the chance to really spend unhurried time in each new place, so I had much more time to explore Montreal.

It is a unique city. Although its in Quebec province, it’s really more of a bilingual city than a purely francophone city. Getting around knowing just English isn’t difficult, and is much easier if you even know a bit of French. And while it’s a bit more spread out than Ottawa, it isn’t nearly as bad as Toronto. Exploring the city can be done on foot or via public transportation. Montreal even has a network of bicycles you can rent, which are located all over town.

Just as we happened to be in Toronto for Nuit Blanche, we were in Montreal for the fall Lantern Festival taking place at the botanical garden. This was far more entertaining and photogenic than what I found in Toronto. The lanterns at night were a photographic bonanza and I could have spent the entire evening in the gardens taken pictures.

There are a number of both touristy and non-touristy things to do in Montreal, but at least make sure to you visit the world famous Schwartz’s Deli in Montreal’s Jewish Quarter and try its selection of smoked meats. You also have to try poutine, Canada’s national dish—with french fries, cheese curds, and gravy, it’s the tastiest heart attack on a plate you’ll ever find! (If you don’t try it in Montreal though, don’t despair, Quebec City also has incredible poutine.)

After days spent exploring Montreal, the train trip to Quebec City is a breeze and passes through pretty countryside.

Then you arrive in Quebec City.

Quebec City has become my favorite city in Canada, and quite possibly in all of North America.

It’s the most European city in North America, and when you walk the streets of the old town, you might think you are in France.

Fun fact about Quebec City: It’s the only walled city north of Mexico. The centerpiece of the Historic District of Old Quebec—a UNESCO site—is the Citadel, which was the French fort in the city. It is also the residence of the Canadian Governor General, who serves as the representative of the Queen as Head of State in Canada.

Outside the fort is the Plains of Abraham, which were not named after the biblical character, but rather the man who used to own the land. It was here that the British took control of Quebec from the French in 1759, in what was a surprisingly short fight. Both French General Montcalm and the British General Wolfe died in the battle.

Given it’s my favorite city, I recommend you make this your last stop on your Eastern Canada train trip and spend at least three days exploring the many things to do in Quebec, including fascinating day trips to nearby islands, and just soaking in the distinctly different atmosphere than anywhere else you’ve visited.

Should You Travel Eastern Canada by Train or Car?

Having done the trip by both train and car, which is the better way to do it? The easy answer is: train. If you’re road tripping across all of Canada, then you might want the flexibility of a car (but even then, it’s totally possible to take the train). Here are a few reasons I think eastern Canada is best done by train:

I’d go so far as to say whenever you can take a train for a trip of four hours or less, it is almost always better than driving or flying (factoring in time spent at the airport).

Let’s talk about the wifi on VIA Rail trains, which was the original purpose for my entire trip.

The wifi is good! It’s perhaps even a bit better than should be expected for being on a moving train. The train company was still beta testing the network when I used it, so it was available for free for all passengers. As such, I’m not sure how much the network performance was impacted by a lot of people trying to access the internet at once. The train company charges for the service now, so I have no idea how that impacts performance. But even with the train’s wifi network wide open, the performance was quite good. I’d say it was on a par with, or slightly better than, the quality of bandwidth you’d find on a domestic flight.

If you want to take in the entire train trip from Toronto to Quebec City, it’s a short enough trip that it can be done by train in five days minimum—with that, you will be able to hit the highlights in each city and have plenty of time for travel, too. But, of course, if you can spend a few days in each city you’ll see more and have a better chance to soak in the culture along the way.