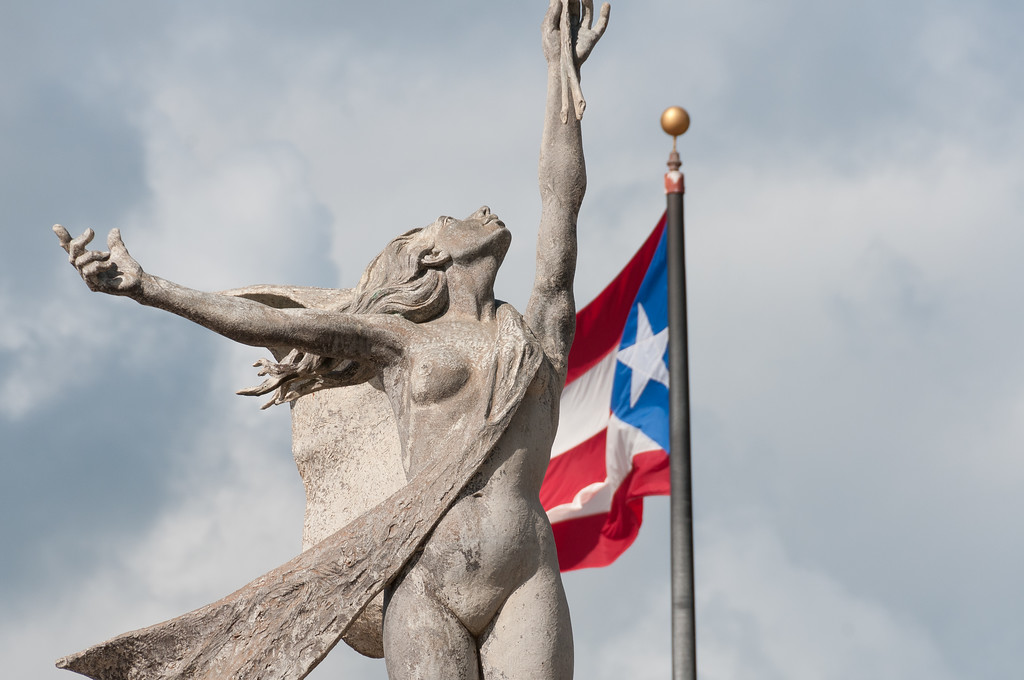 Located just off the coast of the U.S., Puerto Rico is more than just another territory of the United States—there’s a lot of interesting things about this island nation that most people might not know. On one of my trips to Puerto Rico I visited as a guest of the island’s tourism board. I spent my week cave exploring, visiting the island of Culebra, riding the world’s highest zip line, exploring the Old City of San Juan UNESCO site, and visiting the territory’s national park site. Given a it’s a new place, it’s the right time for the next installment of 8 Facts You Might Not Have Known: Puerto Rico facts edition.

1. The flag of Puerto Rico is not based on the American Flag.

Puerto Rico was taken by the Americans from the Spanish in 1898. The flag was designed in 1895 in solidarity with the Free Cuba Movement. It is the same layout and design as the Cuban flag, but with the colors reversed.

The one acknowledgment to the U.S. was in 1952 when the blue field was changed from a light blue to a darker blue to better resemble like the American flag.

2. Puerto Rico has elements of an independent country.

While Puerto Rico is technically a territory of the U.S., there are many facts about it that make it more like an independent country. Puerto Rico competes under its own name and flag at the Olympics and has won eight medals in Olympic history. They have their own entry in the Miss Universe competition, and have had two winners in the last decade. Puerto Rico also has a top level domain name like other countries (.pr).

3. The original inhabitants of Puerto Rico were the Taino Indians.

The Taino Indians gave us the words for hurricane (huracán) and barbecue (barbacoa). They invented the hammock. Puerto Ricans often call the island Borinquen, from Taino word Borikén, which means “Land of the Valiant Lord.” It was thought that the Taino Indians were exterminated in Puerto Rico, but most recent DNA studies have found that they hid in mountains and later melted into the population.

4. There are many famous Puerto Ricans.

Think you don’t know any Puerto Ricans? We bet you do as they include a staggeringly long list of Oscar winners, athletes, and hall of famers.

Plus many more not listed here—because it’s a long, long list.

5. The world’s largest telescope is in Puerto Rico.

The Arecibo Radio Telescope is located in Puerto Rico. It is 305 m (1,001 ft) in diameter, making it by far the largest single astronomical observing object in the world. It’s located inside a sinkhole, which supports its massive size. It has appeared in many movies and TV shows, including “Contact” with Jodie Foster.

6. Puerto Rico is home to more bioluminescent bays than anywhere in the world.

The waters in Fajardo Bay, Mosquito Bay, and La Parguera Bay all contain tens to hundreds of thousands of microorganisms (dinoflagellates) per gallon of water. When the dinoflagellates are disturbed they glow, resulting in glowing water around anything that moves through the water. It’s a favorite aspect with tourists as it’s fairly incredible to watch the waters light up around you while swimming at night.

7. Puerto Rico is more than just one island.

8. San Juan is the second oldest European city in the Western Hemisphere.

The official name is Municipio de la Ciudad Capital San Juan Bautista (St. John the Baptist). Founded in 1508, only the Colonial City of Santo Domingo in the Dominican Republic is older. The Old City of San Juan was a walled city with two major forts: Fort San Felipe del Morro and Fort San Cristóbal. Fort San Cristóbal was the largest citadel built by the Spanish in the New World. The old city is now part of a National Historic Park and a UNESCO World Heritage Site.

Is Puerto Rico a U.S. territory?

Yes. Puerto Rico is a U.S. territory—it’s been a territory of the United States since 1898, since it was ceded to the U.S. by Spain in the Treaty of Paris. And since 1917, Puerto Ricans have been citizens of the U.S., able to travel freely within the U.S.

Why is Puerto Rico a U.S. territory?

About the size of Connecticut, Puerto Rico was first settled by the Spanish in the 1500s. After the Spanish/American War, the island was given to the United States by Spain in the 1898 Treaty of Paris, thus making Puerto Rico a U.S. territory.

When did Puerto Rico become a territory?

Puerto Rico became a U.S. territory in 1898 after it was ceded to the United States by Spain.

If you’re traveling to Puerto Rico, then you’ll likely want to pick up a Lonely Planet Puerto Rico guidebook for the best advice on where to go, what to see, and where to stay.

And if you’re keen to learn more fascinating facts about Puerto Rico’s rich history, culture, and landscape, here are our favorite reads.