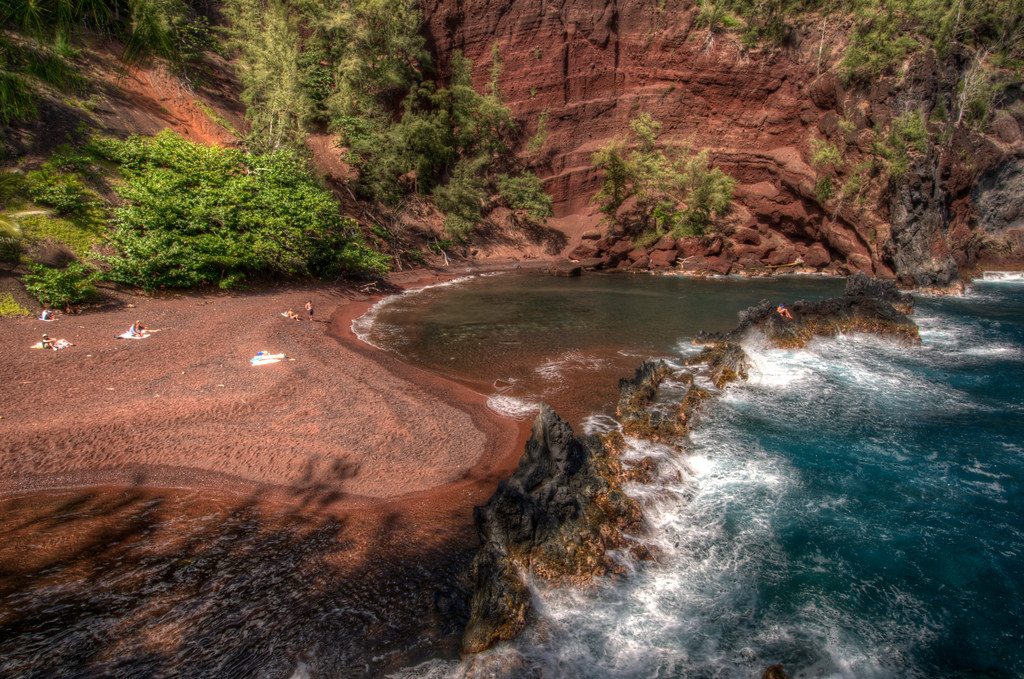 I love beaches—what’s not to love, after all? There’s sand (or rocks), blue skies, and the sound of lapping water. What’s not in the picture for me though, are overcrowded—those places with a Hard Rock Cafe across the street and heaving thongs of half-naked beachgoers piled onto the sand. Those beaches may be beautiful, but they don’t rank as the best beaches in the world simply because it’s impossible to fully enjoy them with those level of crowds.

Hence, you won’t find Waikiki or other overly popular beaches on this list of my favorite beaches in the world. There’s a good chance that most of the beaches here are places you’ve never heard of—these “undiscovered” beaches aren’t on the radar for a lot of travelers, but they are beautiful, restful, and a lot of them are remote. Many are hard to find, let alone get to, so if you’re one of the intrepid travelers truly looking for the world’s most off-the-beaten path beaches—those places where you arrive and you’re the only person there to soak in the good vibes—then know that this is my kind of beach, too.

10 Best Beaches in the World

Remember, some of the most iconic beaches you may see on other top 10 lists likely won’t make it here. Because I’ve traveled the world for more than a decade, I’ve not only seen far more beaches than most travelers, but I have high expectations for a beach—it should be beautiful (or course), but also feature something else that makes it special. Let’s dive into a countdown of my 10 favorite beaches in the world.

Take a hard to reach beach on an island with few inhabitants and few visitors and you have yourself a winner in my book. Getting to Shipwreck Beach in Lanai, Hawaii requires a jeep and a fair amount of walking on foot.

Once you get there, there is indeed a shipwreck. You can also see three Hawaiian islands from the beach: Lanai, Molokai, and Maui. When I was there it was raining (as you can see in the photo), but I also was able to see a whale giving birth not too far from the shipwreck, which made this a truly incredible experience and easily one of the best beach experiences on the list, all things considered.

The thing that struck me when I visited Flamenco Beach was the sand—it might have been the finest grained sand I have ever seen in all of my beachy wanders. If you didn’t know any better, you might think it was sugar given its color and consistency.

Flamenco Beach is popular with Puerto Ricans, but rather unknown to the rest of the world. To get there, you first have to visit the island of Culebra which is either a short flight or ferry ride from the main island of Puerto Rico. The island offers cabins, camping, and picnic facilities available near the beach for visitors. There are also some rusted out tanks on the beach from when it was used as a training site by the U.S. military.

Unlike some of the truly remote beaches on this list, Flamenco Beach is visitable with planning, and once you get there you’ll find basic amenities and a handful of locals also enjoying the powdery sand and gently lapping Caribbean waves.

Manase has been called the most beautiful village in Samoa, and I have no reason to doubt it. In addition to having one of the best beaches in Samoa, the village offers several opportunities to rent bungalows (called fales in Samoan) right on the beach.

If you’re scouring the world in search of a beach that offers beachside bungalows on a budget—we’re talking just $20-30/day—then Manase Beach and Village might be the place for you.

Another reason to love this beach? Samoans are great people, and Samoa is an incredible and often underappreciated country well worth visiting.

What I loved about Rarotonga in the Cook Islands was the lagoon. The Rarotonga reef is located only about 200 meters away from the beach, which means you have a nice area of calm, shallow water for swimming. The beach on the western side of Rarotonga island is long and wide.

Like many of my favorite beaches in the world, the places is uncrowded enough that you can still find affordable accommodation right on the water. I stayed at a budget place with bungalows rooms right on the beach, so I could wake to the sound of waves beckoning me to the beach.

What’s more, this is a pretty easy area of Rarotonga to visit, but I saw more people snorkeling and swimming on the southern part of the island than the west side of the island, even though the beach wasn’t quite as grand. The west side of Rarotonga is definitely the better beach! If you visit the Cook Islands, make sure to get a Cook Island drivers license. It is one of the best souvenirs you can get in the world and it is a real license!

It is hard to pick just one beach to stand out as my favorite in all of Fiji. In fact, it’s impossible, so I can only share a truly memorable beach.

When I first visited in 2007, I found a white sand beach that I had all to myself. I was literally alone on a beach on tropical island.

It was an incredible feeling.

There are numerous beaches on the islands in the Yasawa chain that have few, if any, people. Many of the small resorts have hammocks strung between palm trees where you can sleep or read a book just a few feet from the ocean. I have found places where I could have spent the entire day sleeping and swimming and never have been bothered by another human being—if this is your idea of paradise, then book some time on the Yasawa Islands of Fiji, then go for a wander and you’ll uncover your own slice of heaven on Earth.

I first visited Acapulco on a cruise ship heading to Los Angeles. I arrived several days early to experience Acapulco, Mexico and ended up booking a place online that was “north” of town, near the town of Pie de la Cuesta.

Well it turned out it was quite a bit north of town and I really wasn’t near anything in Acapulco! (It also was just a spare room at some family’s house). The big upside? The house was located right on this fantastic beach. It was huge both in terms of width and length, and I could hear the winter waves of the Pacific hammering the beach every few seconds.

If you look at a map of Acapulco, you’ll see a large lagoon just north a of town and a small strip of land between the lagoon and the ocean—that’s where this beach is located. If you’re keen to have the amenities of a nearby tourist town (Acapulco) but the empty beauty of a beach shared with just a few others, than Pie de la Cuesta is your best option!

All volcanic islands are made up of an igneous rock called basalt. Black sand is nothing more than this black volcanic rock pulverized into sand-sized grains. That means that black sand beaches are not really rare, per se—you can visit them in Costa Rica, among other places in the world. What makes the beach at Punalu’u in Hawaii special are the sea turtles, which come there to bask in the sun.

The chance to sunbathe among majestic sea turtles makes for an experience unlike any others I’ve found in the world. These gentle giants mind their own business while you enjoy one of the the best beaches the Big Island of Hawaii has to offer. You can go independently or find day tours and such of the region.

The beach is also very close to the Green Sand Beach on the Big Island—more on that in a moment!

As you can tell from some of the above entries, I like remote beaches. This beach I visited in the Solomon Islands wins the remote beach award.

For starters, the Solomon Islands doesn’t get a lot of tourism—about 10,000 people a year visit (according to sources when I visited in 2007). Second, the island of Rennell is outside the main archipelago, and the island only gets about dozen tourists a year. That means even the busiest beach is going to have … no one on it. There’s only a slim chance your travels there will overlap with any other travelers.

Locals told me that an old beach on the other side of the island was where the ships used to land years ago, so I headed there. You have to go down a 300 foot cliff to get there (there were old stairs), and no one had been down there in years. Locals only begrudgingly honored my request to see it—my guides and I were the first people to visit this beach in years.

It’s amazing how cluttered a beach can be with driftwood and shells when there are no people around to pick things up. My guides brought a machete to cut down some coconuts and we spent two hours napping and drinking coconut milk on this beach, surrounded by 300 foot sea cliffs that hadn’t seen a human in years.

It was a great afternoon.

I had heard about the Red Sand Beach in Maui for years before I finally got a chance to go there myself. The beach isn’t on the list because it is red—although that does probably give it a few extra points—but rather because it is a great hidden beach. Let’s take a closer look at what makes this beach so special.

First, the red sand is caused by the oxidation of the iron in the basalt. Long ago, it was probably a black sand beach.

Third, as you can see in the photo, the rocks form a natural tiny harbor where the water is calm and you can swim without worrying about the surf.

Finally, to even get to Hana you have to drive the Hana Highway, which was listed as one of my favorite drives in the world.

To reach the fabled Green Sand Beach, you have to go to the southernmost point of the Big Island of Hawaii (which is also the southernmost point in the United States). From there, you either have to hike or drive off-road for a mile or two to reach the beach. From there, you will have to climb down into the bowl to get to the actual green sand. All of that work will be worth the payoff once you get to Papakolea Green Sand Beach!

The reason why the sand is green (and it’s really a combination of green and amber) is because it a mineral called olivine. If you look at the volcanic rock around the big island you’ll see flecks of green in the rocks. That’s olivine (or in gemstone quality, it is known as Peridot). An ancient cinder cone containing ash and olivine eroded, once the ash was washed away the heavier olivine dropped out to form the beach. Because of the shape of the inlet with the beach, it’s a great spot for body surfing—the waves are big and there are no sharp rocks.

The other Hawaii beaches, although uncrowded are easier to get to and thus will usually have other intrepid travelers. Green Sand Beach (Papakolea), however, is worth the extra trek for the extra beautiful views and the chance to see what is—in my humble estimation—the best beach in the world!

28 thoughts on “My 10 Favorite Beaches in the World”