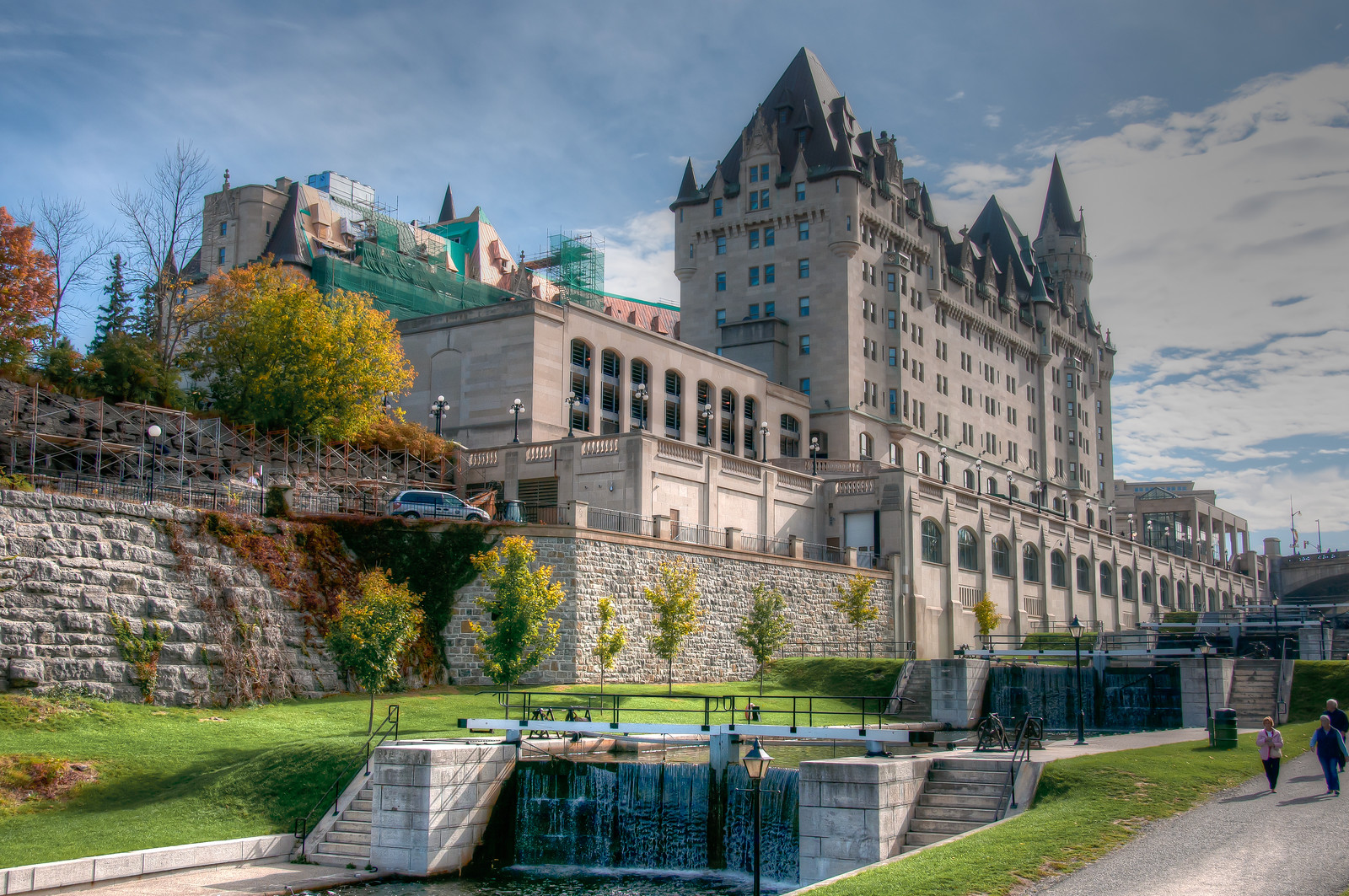 The Rideau Canal, a monumental early 19th-century construction covering 202 km of the Rideau and Cataraqui rivers from Ottawa south to Kingston Harbour on Lake Ontario, was built primarily for strategic military purposes at a time when Great Britain and the United States vied for control of the region. The site, one of the first canals to be designed specifically for steam-powered vessels, also features an ensemble of fortifications. It is the best-preserved example of a slackwater canal in North America, demonstrating the use of this European technology on a large scale. It is the only canal dating from the great North American canal-building era of the early 19th century to remain operational along its original line with most of its structures intact.

The Rideau Canal is actually an enormous structure which goes from the Rideau River to Lake Ontario, however, the most famous part lies just below Parliament Hill in Ottawa. It is easy to see and explore if you are visiting Ottawa, but it can also be seen in many other places in Ontario as well. In the winter the frozen canal is plowed to create the world’s largest ice rink.

The Rideau Canal is the oldest continuously operated canal in North America since it was opened in 1832. It is also known as Rideau Waterway and connects the city of Ottawa (also Canada’s capital city) to Lake Ontario and Saint Lawrence River. The entire length of the canal system measures 202 kilometers. This is one of the UNESCO World Heritage Sites in Canada and is currently managed by Park Canada. The canal was designed by Architect John By.

In addition to being a UNESCO World Heritage Site, Rideau Canal is also a National Historic Site in Canada (since 1925).

About the Rideau Canal

The name Rideau is a French word that means ‘curtain’. This term refers to how the twin falls at the Rideau River looks like as it joins the Ottawa River. It was Samuel de Chaplain who coined this name after seeing the twin falls as he traveled the Ottawa River in the early 17th century. In the late 17th century, the name Riviere de Rideau (or Rideau River) made its first appearance on the maps.

The construction of this canal was part of the military effort to prevent the United States from invading Upper Canada, which is a British colony at that time. The Rideau Canal was one of the canals and forts that were built by the British during that time. All of the canals traverse the Ottawa River. However, the Rideau Canal is the only one of these structures that were built during the War of 1812 that continues to be used until today. Aside from protecting against potential invaders, the canal also served an important military role as it provided a secure supply and communication route for the military.

In addition to its military purpose, the Rideau Canal also served a commercial purpose. Due to the series of rapids in the St. Lawrence River, this was an easier to navigate a route and quickly became the main commercial artery from Montreal and connected it to the Great Lakes in Canada.

The canal system is locked from mid-October and opened again come mid-May. Aside from the Rideau Canal being named as a UNESCO site and National Historic Site of Canada, the Rideau River is also one of the Canadian Heritage Rivers. It was recognized as such in the year 2000.

Below are a few interesting facts that are linked to the Rideau Canal, a UNESCO World Heritage Site in Canada: