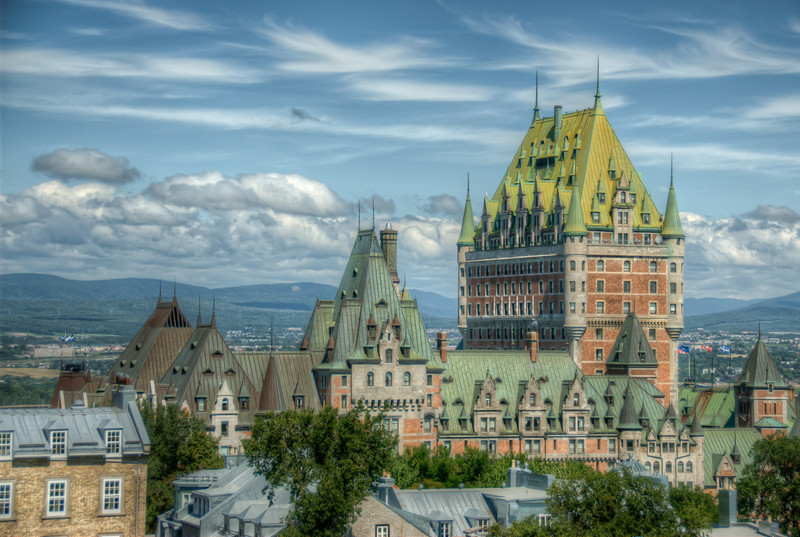 Canada is one of my favorite countries and a place I have extensively explored during my more than a decade of world travels. Many of my trips have focused on visiting and recording every single one of Canada’s 20 UNESCO World Heritage Sites, but I’ve also dedicated many trips to visiting every province and every Canadian national park.

On this trip, the Canadian passenger rail company VIA Rail invited me to visit and test out their new wifi service, so I have been journeying around via train to the country’s most notable cities, Montreal, Toronto, and Ottawa. Next up? Quebec City, which means it’s exactly the right time for another installment of 8 Facts You Might Not Have Known: Quebec edition!

The Battle of Chateauguay took place on October 26, 1813, during the War of 1812. Although 4,000 Americans attempted to take Montreal, they were repulsed by 1,630 French Canadians. If the Americans had been successful, all subsequent North American history would have been different, and today, Canada as we know it might not have existed.

2. It has the oldest English language newspaper in North America.

Despite being a French speaking province, Quebec City is home to the Quebec Chronicle-Telegraph, a weekly English language newspaper. It was founded in 1764, making it the oldest surviving newspaper and English newspaper in North America.

At over 1,500,000 sq/km, Quebec is almost 50% larger than Ontario, and only slightly smaller than Alaska. It is not as large as the Canadian territory of Nunavut, which is over 2,000,000 sq/km in size—but Nunavut is not a province, however, so Quebec wins in the size competition (mostly on a technicality!).

4. The Appalachian Mountains run through Quebec.

The Appalachian mountain range keeps going after it hits the U.S./Canada border and extends through Quebec, all the way up to Newfoundland and Labrador. In fact, the Appalachian mountains extend for almost 2,000 miles (3,200 km) into Canada, and end in central Alabama. Culturally speaking, though, I don’t think the Quebecois have their own version of hillbillies.

The Front de libération du Québec (FLQ) was a Quebec separatist and Marxist-Leninist  paramilitary organization that committed several political murders and bombings. The group firmly believed in the Quebec sovereignty movement, but most support for the FLQ ended after they kidnapped and murdered Quebec Labour Minister Pierre Laporte in what is known as the “October Crisis.”

The 1976 Olympics were held in Montreal and the city took on a huge debt to finance the games. The mayor of Montreal famously said, “the Olympics can no more have a deficit than a man can have a baby.”

Well, men apparently started having babies because the bonds to pay for the Olympics weren’t fully paid off until 2006—a staggering 30 years after the games had long since passed.

7. Montreal’s Olympic Stadium is the largest inclined tower in the world.

The stadium built for the ’76 Olympics is unique in many ways. The tower, which supports the fabric dome roof of the stadium, is the largest inclined tower in the world at 574 ft (175 m). The building costing over $1.6 billion and actually wasn’t completed in time for the 1976 Olympics!

Today, the stadium has no permanent tenant since the Expos left for Washington. There have been calls to demolish the stadium because it has so many structural problems, but because it sits on top of a subway line, demolition would cost an additional $700 million. This long and expensive is why it’s known locally as the “Big O” (as in “owe”).

8. The Montreal Canadiens are the most storied ice hockey team in NHL history.

The Canadiens were one of the original teams in the National Hockey Association in 1909. The team’s nickname in both in English and French is the “Habs,” and they have won the Stanley Cup 24 times (and were the fist team in NHL history to win 3,000 games). The majority of their Stanley Cup wins occured in the 50s and 60s when they had a truly all-star, powerhouse team. But that’s not to say they’ve entirely lost steam—they last won the Stanley Cup in the 1992–93 season.

If you’re traveling to Quebec, (or visiting Canada as a whole) then you’ll likely want to pick up a Lonely Planet Quebec guidebook for the best advice on where to go, what to see, and where to stay.

And if you’re keen to learn more fascinating facts about Quebec’s rich history, culture, and landscape, here are our favorite reads.

18 thoughts on “8 Interesting Facts About Quebec”