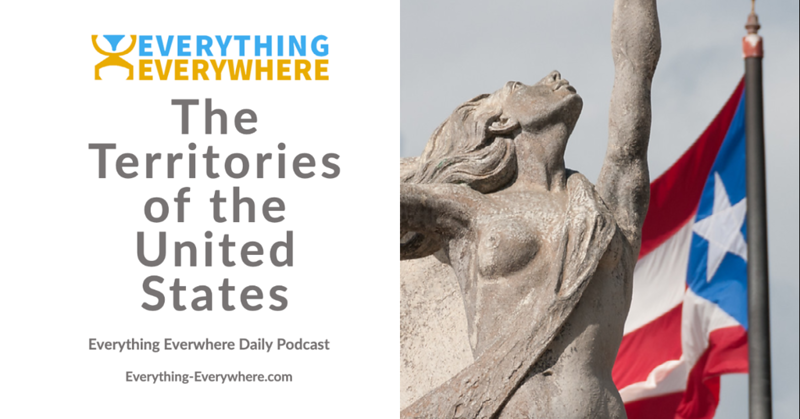 If you ask most Americans what makes up the United States, they would tell you the 50 states plus the District of Columbia.

They would be right. Mostly.

Ever since the founding of the country, the United States has also had territories. Territories have often been training wheels for regions before they became full-blown states.

Learn more about the territories of the United States on this episode of Everything Everywhere Daily.

To make this episode a manageable length, I’m only doing to be discussing the territories which currently exist. Historically, places like Alaska, Hawaii, the Dakotas, and even the whole Louisiana Purchase were territories.

Today, however, all of the US territories are islands located either in the Pacific Ocean or in the Caribbean Sea.

There are currently 16 territories, although only 5 of them have permanent human populations.

Just to get them out of the way, the uninhabited territories are:

All except Navassa Island are located in the Pacific.

There are also two territories which the US claims, but are also claimed by other countries.

Legally, there are two types of status that a US territory can have. It can either be incorporated or unincorporated, and it can be organized or unorganized.

Palmyra was part of Hawaii before Hawaii became a state, and for reasons I have never been able to figure out after years of researching it, it was not included when the rest of the territory became a state.

Every other territory is unincorporated.

The other attribute is if a territory is organized. All of the territories I just listed are unorganized.

If a territory is organized, that means they have passed and had congress approve what is called an Organic Act, which is a type of constitution that lays out how the territory is to be run.  For a territory to be organized, it has to have people of course.

Here is where we get into the territories which you’ve probably heard of.

The following are the five inhabited territories of the US.

I’ll go through each of them, and give some background about each territory, how they came to be, and what their potential future is.

I should add that I’ve personally been to all of these territories at least once, so I have some first-hand experience with them.

I’ll start with American Samoa because they are the outlier of the group. Of the five inhabited territories, American Samoa is the only one that doesn’t have an Organic Act. As such, people in American Samoa are not US Citizens, but rather are US Nationals. In fact, they are currently the only people who can be classified as US nationals and not US citizens.

A national means they can travel freely within the US, and work wherever they want. They can get a US passport, but the passport is slightly different in that it says national.

The big difference is that if they moved to the US, they couldn’t vote. They would have to go through the naturalization process to become a US citizen.

American Samoa is part of the Samoan archipelago and is very close to the country of Samoa, formerly known as Western Samoa. It became a US territory via a treaty in 1899 between the United States and Germany which divided up the islands between themselves.

The German islands were eventually lost to New Zealand after WWI, and then became independent in 1962. The other islands remained a US territory the entire time.

American Samoa currently has a population of 55,000 people, and they have the highest rate of enlistment into the armed forces of any US state or territory.

The future of American Samoa has been debated for decades, yet nothing has really happened. Give the small population, it is unlikely to ever become a state.

Beyond that, there are many options for the territory.

One is to do nothing. Currently, American Samoa as much more freedom than other territories. The Federal government doesn’t own any land in the territory, and there is a high degree of autonomy, but they still have ties to the US.

Another option would be to just pass an Organic Act. That would subject American Samoa to more US laws, but it would give everyone citizenship.

Independence is another option that has been floated, and it has some support in the territory.

The final option would be to join back up with the nation of Samoa.

There doesn’t appear to be a consensus on any option beyond continuing with the status quo for right now.

Guam was one of the last bits of the Spanish Empire which the United States gained after the Spanish-American War.

Geographically it is the southernmost island of the Marianas Islands archipelago.  More on that in a moment.

Guam was invaded by the Japanese at the same time as the bombing of Pearl Harbor. As with the invasion of the Philippines, it took place on December 8th, because of the International Dateline.

Guam, being the westernmost part of the United States, has always played a role in military affairs. After its liberation in WWII, it was using a base for bombers. It was also used extensively for operations during the Korean and Vietnam wars.

The role of the military in Guam has only increased as the US has moved troops out of Japan.

The current population of Guam is approximately 165,000 people.

Guam serves as the unofficial capital of the Micronesia region which includes the Northern Marianas Islands, the Federated States of Micronesia, the Marshall Islands, and Palau. Many people from these islands who need medical procedures or just want to go shopping, will go to Guam.

The native people of Guam are the Chamorro people, where they make up a bit less than half of the population.

As with other territories, there is a great deal of discussion regarding the future of the territory. Options range from independence, merger with Hawaii, changes to their organic act, and merger with the Northern Marianas Islands.

Which brings me to the next territory…..

The Commonwealth of the Northern Marianas Islands

Also known by the acronym CNMI, the Northern Marianas Islands are culturally and geographically part of the same islands as Guam.

What happened is that after the Spanish-American War, Spain sold the islands to German, and separated them from Guam. They became part of the United Nations Trust Territory of the Pacific which was overseen by the United States.

In 1975, there was a referendum in the territory where the people choose to closer ties with the United States by becoming a territory.

The native people in CNMI are Chomorro just like in Guam. The population of the territory is 55,000 people, about the same as American Samoa.

There was an issue in the 90s where garment sweatshops were set up in CNMI because of a loophole in US law. Products created in the Marianas were eligible to say they were Made in the USA. However, they were exempt from many laws, including the minimum wage.

Discussions about the future of CNMI mostly revolve around a merger with Guam. A single territory with a larger population and geographical footprint would probably be stronger, with a greater ability to negotiate with the federal government.

In 1969 there was a referendum for a merger. It passed in the Northern Marianas but failed in Guam.

The USVI became US territory by being purchased from Denmark. They took possession on March 31, 1917. The territory was purchased for $25 million in US gold coins, which would have a value of close to $600 million today.

There are three main islands in the territory: Saint Thomas, Saint John, and Saint Croix. The current population of the territory is about 110,000 people.

It is the only US territory where everyone drives on the left side of the road.

There was talk of a merger with the British Virgin Islands, which lies immediately to the east of USVI, but nothing ever became of that. Likewise, talks of merging with Puerto Rico, which is immediate to the west, also have never gone anywhere given the large cultural differences between the two territories.

Of the five inhabited US territories, there is probably the least amount of debate as to their future.

Finally, I’ll end with the big fish in the talk of territories,

Puerto Rico, like Guam, came into the hands of the United States after the Spanish-American War.

Because of its size, being a US territory has always been contentious. In 1950, two Puerto Rican nationalists attempted to assassinate President Harry Truman.

Support for Puerto Rican independence was very high in the early and mid 20th Century, but that that slowly declined over time.

In 2017, for the first time ever, a referendum was held where the majority of voters supported the idea of statehood. However, the vote was disputed as pro status quo group boycotted the election and the turnout was only 22%.

Realistically, Puerto Rico is the only territory that could become a US state by itself. They wouldn’t be the smallest state either in terms of population or area.

In November of 2020, Puerto Rico will have another referendum on the subject of statehood. The question on the ballot this time will be very simple and straightforward:

“Should Puerto Rico be admitted immediately into the Union as a State?” Yes No

There has already been a flag with 51 stars designed, and it really doesn’t look that much different. It is 8 rows of alternating 9 and 8 stars.

I couldn’t conclude this episode without at least mentioning the District of Columbia which is not a territory. It is its own special thing, which is worth of an episode of its own in the future.

Also, there are several former US territories which became independent countries. They include the Philippines, the Marshall Islands, Micronesia, and Palu.