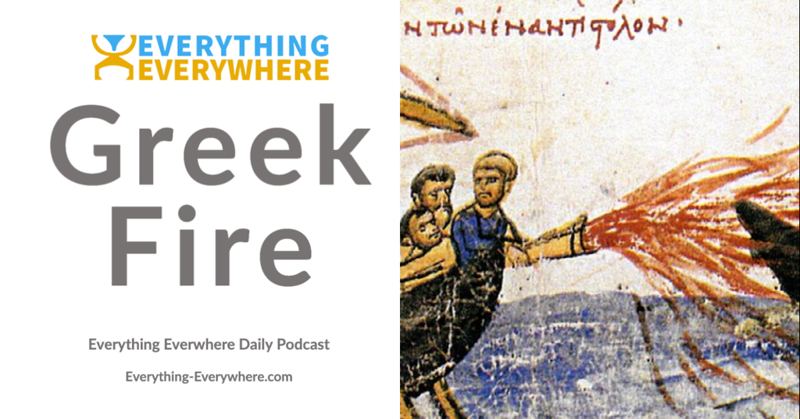 There are many things which have been called ancient mysteries. These are products or techniques which were used in the past which have since been forgotten or lost.

Most of these things have been rediscovered, and usually in a way that was better than what originally came before it.

There is one thing which truly has been lost in time and we have no idea how it was made.

Learn more about Greek Fire, and how it worked, and how we lost the secret on this episode of Everything Everywhere Daily.

You might have seen some WWII movie where the Nazis try to develop a superweapon to turn the tide of the war. There are very few cases in history where a new weapon was actually able to change the course in a military conflict.

The atomic bomb was one such weapon. Greek fire was one of the others.

Greek fire was a flammable liquid that was used by the Byzantine aka Roman empire starting in the year 672 CE.

The use of fire in warfare was nothing new. Substances such as pitch, boiling oil, and flaming arrows had been used for centuries in battle. Greek fire was another thing entirely, however.

According to the historian Theophanes the Confessor, Greek Fire was brought to Constantinople by the architect/chemist from Heliopolis, Egypt,  Kallinikos.

Kallinikos fled to the Romans after the conquest of Egypt, and most of the middle east, by Arab forces which had been conquering most of the region. Since the Arabs sprang forth from the Arabian Peninsula, they were unstoppable and the Romans didn’t seem capable of stopping them.

At that time Kallinikos, an artificer from Heliopolis, fled to the Romans. He had devised a sea fire which ignited the Arab ships and burned them with all hands. Thus it was that the Romans returned with victory and discovered the sea fire.

We don’t know how much of the story is true. We don’t know if Kallinikos invented Greek Fire or if he brought a recipe that might have been developed in Alexandria earlier. What we do know is that Greek Fire changed the course of the war.

Greek Fire was particularly devastating to ships. One of the distinguishing features of Greek Fire is that it couldn’t be put out. In fact, legend holds that Greek Fire was actually ignited by water.

The Greek Fire was launched at ships like a flamethrower from devices called a siphon. They were large bronze spigots from which the greek fire was pumped out and on to enemy ships.

The fire supposedly made an enormous roaring sound when it was launched. It would burn wood, cloth, and flesh. It would also burn when it was floating on water.

According to reports, the only thing which could put out Greek Fire was vinegar and old urine. This of course implies two things: first, that they tried putting it out with fresh urine, and second, that at some point, someone had a bunch of old urine sitting around to put out a fire.

During the first and second Arab siege of Constantinople, Greek Fire was one of the critical factors which allowed the Romans to repel the attacks. If it wasn’t for Greek Fire, it is entirely possible that the empire could have fallen almost 700 years before it eventually did.

When Greek Fire arrived on the scene, the people of Constantinople thought it was a gift from God. It arrived just in time to save them from an almost certain defeat.

Over the centuries, Greek Fire was used in battles to keep enemies back and allow the empire to stay alive. Eventually, the weapon was used in land warfare to attack siege weapons and as projectiles. Grenades filled with greek fire were developed and bales of hay soaked in Greek Fire were often launched from catapults.

Greek Fire became so important to the defense of the empire, that emperors mandated that it be kept a state secret. The emperor Constantine VII Porphyrogenitus, admonished his son and heir never to let the secret fall into the hands of their enemies. Legend had it that one official who was going to sell the secret was struck down by a holy flame when he entered a church.

Overtime, Byzantine foes did capture Greek Fire, but it didn’t necessarily mean their secret was exposed. Bulgars in 812 captured a siphon and units of Greek Fire but didn’t have the knowledge to make it work. In 827, Arabs captured a fireship but likewise were unable to replicate the recipe.

Because so few people knew the secret, eventually the recipe for Greek Fire disappeared.

Unlike things like Damascus Steel which we have more or less reversed engineered, we have never been able to recreate Greek Fire.

We have a rough idea of what it was probably made out of. Potential ingredients include crude oil, pine resin, sulfur, quicklime, or saltpeter. There have been many theories of what the recipe might have been, but so far nothing has panned out.

It isn’t as if we really need to know the secret. We have many flammable liquids that serve an almost identical function to Greek Fire, but it is a historical mystery that has yet to be resolved.