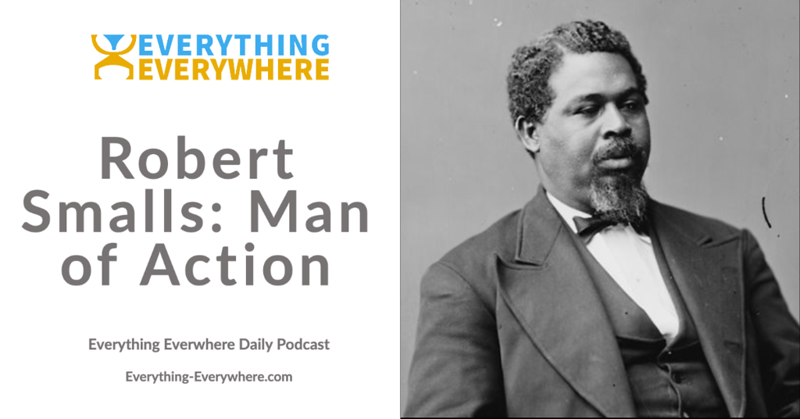 Robert Smalls was born a slave in 1839 in Beaufort, South Carolina. From that humble beginning, he went on to become a war hero, a ship captain, a presidential advisor, and a member of the US House of Representatives.

However, he is best known for one of the most daring exploits of the entire Civil War.

Learn more about Robert Smalls on this episode of Everything Everywhere Daily.

As noted in the introduction, Robert Smalls was born in 1839. His mother was Lydia Polite, a house slave and his father was an unknown white man, who was probably his owner Henry McLee.

He was brought up with privileges that other slaves weren’t allowed. He was allowed access to the house and he didn’t have to work in the fields. His mother wanted him to work in the field so he could understand the true nature of slavery. When he did, he developed a rebelliousness that never left him.

Eventually, he was allowed to be a laborer in Charleston. While this might have offered him a bit more freedom than life on the plantation, almost all of his income was taken by his owner.

Through his teens and early 20’s, he took many jobs on the waterfront in Charleston working as a longshoreman and eventually working on ships themselves. During this time he developed an expert understanding of ships and of the Charleston Harbor.

He also got married and became a father.

The constant threat hanging over his family was that they would be sold and the family split apart. If that were to happen, in all likelihood would never see each other again.

Smalls inquired as to the price for buying the freedom of his wife Hanna, his daughter, and his infant son. His owner gave him a price of $800. It was a large amount for the time, and an almost insurmountable level considering that his owner took over 90% of his income. He had only managed to save $100.

If he wanted to save himself and his family he was going to have to escape.

Escaping from slavery was hard enough, but doing it with two young children was even more difficult. When he told his wife about his plan, he was honest about what would happen if they were caught. They would almost certainly be shot, and the children would be sold.

His wife Hanna replied,  “It is a risk, dear, but you and I, and our little ones must be free. I will go, for where you die, I will die.”

Robert was going to need a plan. Thankfully, he had one.

It is here we need a bit of background as to what was happening in the civil war.

The key to the North’s strategy against the Confederacy was operation Anaconda. This was a plan to cut off the confederacy by sea so they couldn’t import or export goods with the rest of the world.

By 1862, the port of Charleston, as with almost every other port in the Confederacy, was blocked by the Union. Even though Charleston was deep in the South, the Union forces were only about 10 miles away by sea.

The only ships which could get in or out were blockade runners who would try to slip past the Union blockade.

Small’s plan was to commandeer one of the blockade runners, the CSS Planter, where he had been working for the last year, and sail it to the ships in the Union blockade.

While it sounded simple, it was fraught with danger.

For starters, the ship had three white officers who were always on board. They had to be deal with.

Next, they had to get past the batteries which guarded the entrance to the harbor. They could destroy the ship in seconds.

If they were detected, the Confederate navy would do everything in their power to sink the ship to make sure it wouldn’t get into the hands of the Union.

Finally, they had to make it to the Union lines without getting attacked by the Union ships, who would naturally assume hostile intentions of any confederate ship which sailed up to them.

To give you an idea of the stakes, the naval report on the incident noted that “The design was hazardous in the extreme,” and  “Failure and detection would have been certain death”.

The crew of the ship consisted of the three white officers, and seven other enslaved black men. Occasionally, the ship would be put into the hands of the crew while the white officers spent the evening with their families.

On  May 12 was one such night and Robert Smalls made his move.

Smalls notified the crew of his plans, and two of the crew opted out and stayed onshore.

At 2 am the Planter took off. They made one stop at warf to pick up Small’s wife and children as well as several other passengers. The total number of people on the ship was 16, all of whom were enslaved blacks.

From here, everything was about deception. As a steamship, it was simply too loud and obvious to sneak past.

Smalls was the pilot of the ship in all but name over the last year, so he knew all of the codes which were required to pass the checkpoints in and out of the harbor.

By 4:15 am he had given all the right signals and had passed Fort Sumpter without any suspicion. He even crossed his arms and used his body language like the white captain he was impersonating, just so no one would notice in the dark.

Eventually, the Confederates took notice of what was happening, but by that point, the Planter was out of gun range.

At this point, they had to move to the next phase of the operation. They had to make sure that the Union did attack them. Small’s wife brought with her a bedsheet. They took down the South Carolina and Confederate flags and raised the white flag of surrender.

As the approached the U.S.S. Onward, the ship didn’t initially see the flag. They pointed their guns at the Planter. However, just in time, as the sun was rising and there was more light, someone on the Onward saw the white flag and they stood down.

When it became clear they weren’t going to be fired upon, Smalls pulled the Planter up alongside the Onward and said, ‘Good morning, sir! I’ve brought you some of the old United States guns, sir!’

Smalls, his family, and the 12 other passengers were free.

Not only were they free, but they had also managed to take guns, ammunition, and a ship out of the arsenal of the Confederacy and delivered it to the Union.

In the report to the Navy after the incident, it was described as follows:  “Robert, the intelligent slave and pilot of the boat, who performed this bold feet so skillfully, informed me of [the capture of the Sumter gun], presuming it would be a matter of interest.” He “is superior to any who have come into our lines — intelligent as many of them have been.”

Smalls, who previously had only $100 to his name, was awarded half the value of the Planter by the United States Congress in recognition of his accomplishment. He was awarded $1,500, which was a significant sum in 1862. He used this money to buy his former owner’s house after the war.

The confederacy, having been humiliated, put a $4,000 bounty on the head of Robert Smalls. They also had to create an excuse to explain how a ship full of slaves managed to pull this off. Their story was that three white people were on board who helped them, but that wasn’t true. Robert and his crew did it all themselves.

While his escape was the most notable story of his life, it wasn’t the last the world heard of Robert Smalls.

He was brought to Washington with Frederick Douglas to lobby President Lincoln to allow black soldiers to serve in the Union Army, for which they were successful.

He served in the navy and became the first black naval ship captain in the history of the United States.

In the 1890s he was offered the rank of Colonel in the Spanish-American War, and later the position of Ambassador to Liberia, but he turned down both positions so he could remain and work in his community.

Robert Smalls passed away in 1915 at the age of 75. His last years were spent fighting for voting rights and against Jim Crow laws.

On his tombstone is his final epitaph which he wrote himself:

“My race needs no special defense, for the past history of them in this country proves them to be the equal of any people anywhere. All they need is an equal chance in the battle of life.”