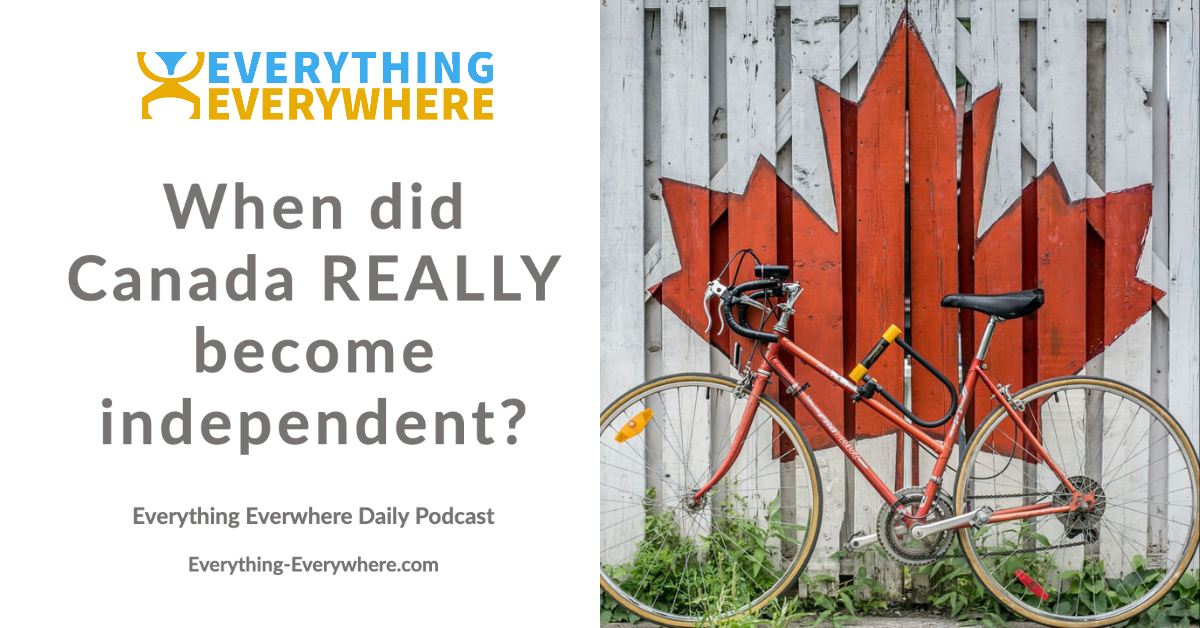 In a previous episode of the podcast, I touched on how it was difficult to pin down the date in which the United States actually became independent.

In the case of the United States, it was a matter of pinning down when we wanted to define independence. Was it at the start of the rebellion, the act of declaring independence, or was it the end of the war?

In the case of Canada, trying to pin a date on independence is a lot more complicated, and extends over a much longer period of time.

Find out when Canada became independent, or if in fact they ever really did, on this episode of Everything Everywhere Daily.

The impetus behind this came from the John Lambton, 1st Earl of Durham, who was the high commissioner for British North America. He was sent to the region to investigate what could be done after several rebellions in the British territories in 1837.

His conclusions were presented to the British Parliament in the form of a document titled Report on the Affairs of British North America. In it, he said that if the people weren’t given some sort of national identity to rally around, they would eventually seek independence like the United States, or join the United States itself.

The next big step in Canadian independence occurred on July 1, 1867, with the passage of the  British North America Act.

If you were to ask most Canadians when Canada became independent, the vast majority would say July 1, 1867.

This is mostly true, but not totally true.

It was on this date that the British North America Act was passed which established the dominion of Canada. This is the day that Canadians celebrate as their national day, aka Canada Day, but it isn’t called Independence Day and for good reason.

First, the Canada which was created in 1867 was not the same as the Canada we know today. The act joined together the Province of Canada, with the colonies of New Brunswick and the colony of Nova Scotia. It didn’t include other British colonies that were in North American such as British Columbia or Newfoundland.

Second, it created what was known as a Dominion. A Dominion was a newly created term to describe a part of the British Empire which had extensive autonomy to create their own rules. It was something more than being just a colony, where all decisions were determined top-down by colonial administrators. Dominions could have their own elections and mostly determine their own course.

Canada was the first Dominion, but others soon followed suit in New Zealand, Australia, South Africa, Ireland, and India.

Much of this was a recognition that if the British didn’t allow for more autonomy, they would probably lose their possessions similar to how the United States left the empire.

Although Dominion status did fundamentally change Canada, the British Parliament still had ultimate control. They could unilaterally pass any legislation which affected Canada and overturn any law passed by the Canadian parliament.

Canada was also not allowed to have their own embassies or ambassadors, and all foreign policy was transaction through the British.

While Canada was given an identity in 1867, they were hardly independent considering that absolutely everything in the country could be overridden or controlled by another country.

One condition of independence I spoke about the in United States episode was recognition by other countries. Canada didn’t go about receiving international recognition until the 20th Century.

Canada finally established its own diplomatic relations with the United States in 1927.

This was codified in the 1931 Statute of Westminster which basically stopped the ability of the British parliament to unilaterally make laws for Canada. It replaced it with something known as “request and consent”. While the British could no longer unilaterally impose their will on Canada, Canada still needed to make a request to the British parliament to change their constitution. They also still had the monarch of the United Kingdom as their head of state.

This was finally resolved in 1982 with the Canada Act. This removed the request and consent clause and eliminated any and all ability for the British parliament to pass laws affecting Canada.

So, with the Canada Act finally passed, and with a ceremony in 1982 in Ottawa overseen by the Queen, Canada finally became 99% independent!

Well, it has to do with that whole queen thing….

Canada is not a republic. It is a kingdom. Many Canadians aren’t even really aware of this fact.

Their monarch is Queen of Canada, who just so happens to be the Queen of the United Kingdom.

For all practical purposes, this isn’t a big deal. It isn’t as if the Queen is sticking her nose into the business of Canada. Nonetheless, there are many extraordinary sweeping powers that are officially vested in the Queen in Canada’s constitution.

The day to day duties of the Canadian Monarch are performed by the Governor General of Canada, which is a mostly honorary position that is filled by notable Canadians. Previous Governors General have included talk show hosts, and the current one was an Astronaut.

Nonetheless, the Monarchy is the one vestigial thing that still ties Canada to Britain.

Most Canadians don’t seem to care, however. The republican movement in Canada is quite small, as is the Monarchist League of Canada. Many of the major political parties in Canada have taken no stance, and those that have, haven’t really pressed the issue.

So, the answer to the question of when Canada became independent covers a span of time over 150 years. You could pick 1867, 1931, 1982, or depending on your thoughts of the Queen, you could might say they have yet to achieve total independence.