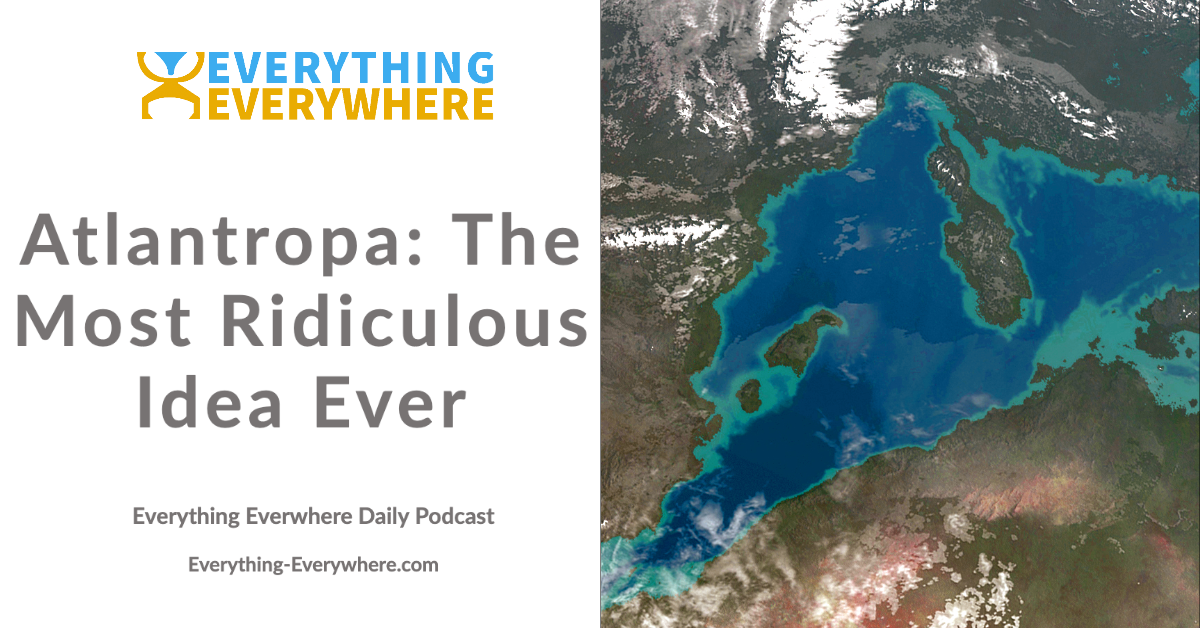 In the aftermath of the horrors of WWI, many people in Europe wanted to find a better future going forward. A future of peace and prosperity, where energy, food, and jobs would be available for everyone.

One man from Germany named Herman Sörgel had a VERY ambitious idea. An idea which would literally change the map of the planet Earth, and was the biggest proposed engineering project ever put forward.

Learn more about Sörgel’s staggering, sweeping, and ultimately ridiculous idea of Atlantropa on this episode of Everything Everywhere Daily.

This episode of Everything Everywhere Daily is sponsored by listeners like you.

Over on Patreon.com, there is a small but growing community of listeners who support the show with their donations.

In addition to showing your support for the show, you can also get some extra benefits as well.

Depending on your level of sponsorship you can be listed as an associate or executive producer of the show, monthly original wallpapers for your desktop and smartphone, as well as get merchandise like stickers, t-shirts, and hoodies. Depending on your sponsorship level, you can also submit show ideas directly to me…..and because this is a daily show, I need a lot of them.

Next month, patrons also will be able to get monthly ebooks of the episode transcripts as part of their support. As new projects, products and events roll out over the next several months, patrons will have first dibs on everything.

If you would like to be a sponsor, go to Patreon.com/EverythingEverywhere or click on the link in the show notes.

To succinctly summarize Herman Sörgel’s Atlantropa project, it is an attempt to create a new continent by merging Europe and Africa.

I don’t mean that it is an attempt to join Europe and Africa in a political and economic union like the European Union, or the United Nations, I mean the idea behind it was to literally physically link Europe and Africa via several mega engineering projects, the center of which would be draining the Mediterranean Sea.

….and by megaprojects, I mean MEAGAPROJECTS. There are no fewer than five different projects which would be required that would be the largest, engineering projects on Earth.

The lynchpin of the whole project would be the Strait of Gibraltar Dam.

Yes, a dam which would shut off the Mediterranean Sea from the Atlantic Ocean.

Damns are big projects. Many of the biggest engineering projects in world history have been big dams. The Three Gorges Dam in China, the Aswan High Dam in Egypt, and The Grand Ethiopian Renaissance Dam currently under construction, are all examples of massive projects that took years to build.

Both of these are tiny compared to a dam across the Strait of Gibraltar.

At its narrowest point, the Strait of Gibraltar is 14.3 kilometers or 8.9 miles wide. At its deepest point, the strait is 900 meters or 2,953 feet deep, and that doesn’t include the fact that any dam would still have to be at least 100 meters or 300 feet above sea level on top of that.

Initial estimates of such a proposed dam in the early 20th century concluded that all the concrete production in the world wouldn’t be sufficient to create the dam.

Even building a bridge or a tunnel to allow cars to cross the strait would be one of the greatest engineering feats in history, let alone trying to build a concrete barrier along the entire stretch.

Then there is the other issue of where the water would go. Most dams are located on rivers and use gravity to create the energy that is used to power turbines. Energy from water from a higher elevation is stored and then captured as it flows downstream to the sea.

The Mediterranean Sea is already at sea level. Where does the water on one side of the dam go? The answer is evaporation.

The Mediterranean Sea is a unique body of water in that very little water really flows out of it. Water flows in from the Black Sea, rivers surrounding the Mediterranean, but mostly through the Strait of Gibraltar.

If the water in the Mediterranean wasn’t replenished by the Atlantic Ocean, it would drop about 1 meter a year just from evaporation. In fact, this is why the Mediterranean Sea is slightly more salty than the rest of the ocean.

The idea for this project came from geologists which concluded that 5.5 million years ago, most of the Mediterranean Sea dried up in an event called the Messinian salinity crisis. The goal of Atlantropa is to recreate this event via human engineering.

Assuming the Gibraltar Strait Dam was built, the plan would be to lower water levels in the Mediterranean Sea by 100 meters or 300 feet. At this level, more land would start appearing off the shore. The Adriatic Sea would basically disappear and turn to a flat grassland, and Greek Islands would disappear and become connected to the mainland of Europe.

Most importantly, Sicily would become connected to Italy and Sicily would also become very close to Tunisia. This is important because this would be the location of the SECOND dam, which would separate the eastern and western Mediterranean, and it would be even larger than the Gibraltar Dam. The goal of this dam would be to drop water levels in the east by another 100m.

There would also need to be another dam built in the Dardanelles to hold back the Black Sea, and a system of locks for the Suez Canal, to take ships up the 200m to sea level, far greater than the 26 meters or 85 feet that the Panama Canal has to raise and lower ships.

The goal for all of this would be to create new farmable land and electricity. The dams, in theory, would have provided all of the electricity for Europe and Africa, and the new land reclaimed by the reduction in sea levels would be equivalent to the size of France and Belgium combined.

There were a lot of unanswered questions about the project, like what would happen to the turbines in the dam if they had to process seawater. Saltwater is very corrosive on metals. There is a reason why there are no hydroelectric dams that use saltwater.

Also, if the level of the Mediterranean Sea were to drop by evaporation, that means the reaming water would become very salty. Far saltier than anything which lives there currently could survive in. Over time, it would become a giant version of the Dead Sea, and the sea would be devoid of all life.

What would happen if a major Earthquake, like the 8.7 magnitude Lisbon earthquake of 1755 hit the dam? If the dam broke, it isn’t just an artificial reservoir which would empty out, it would be the entire Atlantic Ocean. You’d see the largest torrent of water in the history of the planet refill the Mediterranean basin in just a few days.

Finally, where would all the evaporated water go? If you remove all that water from the Mediterranean, it would result in sea levels rising by a few feet on the rest of the Earth.

Mind you, I haven’t even touched the political, economic, and engineering feasibility of such a project, any one of which would make this project impossible.

However, draining the Mediterranean wasn’t even the biggest part of the plan. That would be reshaping Africa in such a way that it would totally redraw the globe.

The goal in Africa was to create several dams which would several enormous freshwater lakes in the middle of the continents. By enormous, I do mean enormous. The dam would be built across the Congo River,

The two lakes would fill the Congo Basin, which is most of the northern half of the Democratic Republic of Congo, and a massive expansion of Lake Chad, which would submerge most of what is today the countries of Chad and Niger.

The idea being that this water could be used for irrigation and water transportation for the interior of Africa, and of course more massive power generation. Looking at a theoretical map of Africa after the Atlantropa project would be completed, it barely looks the same with several massive bodies of water in the middle of the continent.

Also, the plan for this didn’t really involve asking anyone who lived in Africa about it.

While he was a pacifist, Sörgel was a German right through the entirety of the Third Reich. He wasn’t a member of the Nazi party, but he did quote Hitler in some of his writings to try to gain sympathy for the idea in the Nazi hierarchy.

Science fiction author Philip K. Dick used Atlantropa as one of the ideas the Nazis implemented in his alt-history story “The Man in the High Castle”, and in the Amazon series by the same name, the project isn’t explicitly mentioned, but it is shown on some of the maps in the background in some scenes.

Herman Sörgel died in 1952, promoting the idea of Atlantropa to the very end. The Atlantropa Foundation he established dissolved in 1960, after developing little interest in the idea.

Atlantropa was the ultimate utopian plan. There was no way a plan like this could ever be done. Politically, governments could never possibly agree to this, given how much it would transform their territories. Economically, something like this would cost in the many trillions of dollars. Environmentally, it would have destroyed almost all life in the Mediterranean Sea and much of the ecology in Central Africa. Even from an engineering perspective, it is doubtful if many of these projects are even possible.

Nonetheless, you have to give Sörgel credit for thinking big, even if Atlantropa was the most ridiculous idea ever.