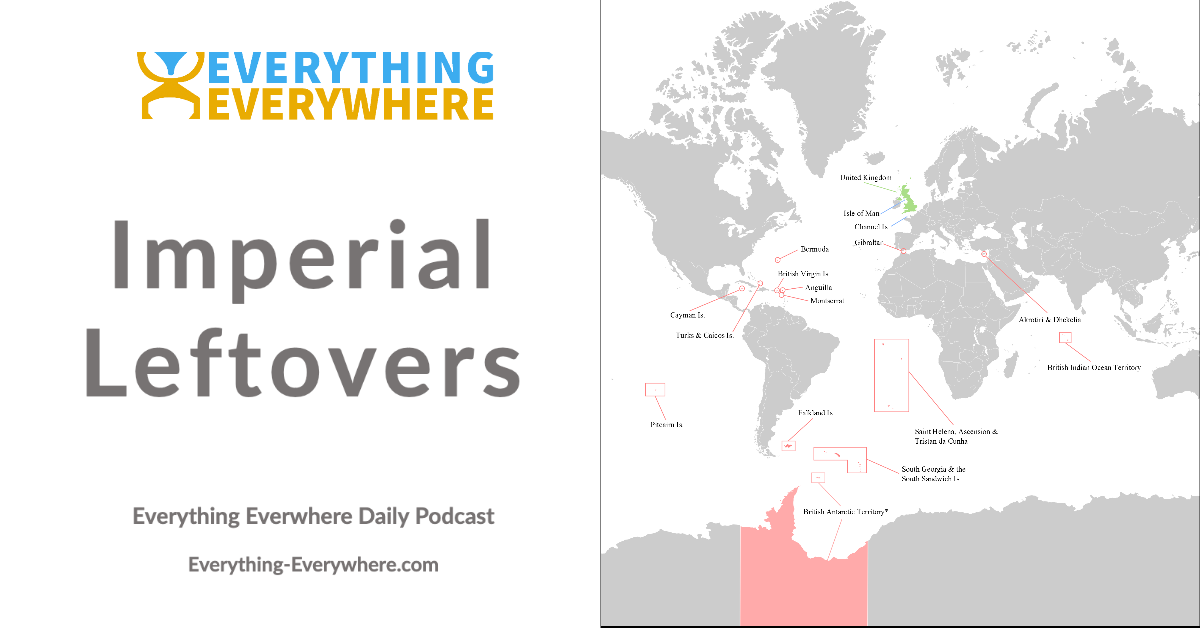 At its peak, the British Empire covered 23% of the world’s population and 24% of the Earth’s landmass. By either measure, it was the largest empire in the history of the world.

While the vast majority of the Empire is gone, there are still assorted crumbs of the empire that exist around the world.

Find out more about Britain’s Imperial leftovers on this edition of Everything Everywhere Daily.

In its heyday, the British Empire was huge. 80 of the current 193 members of the United Nations were at one point or another part of the Britsh Empire. Some of the largest nations on Earth were part of the Empire: Canada, Australia, the United States, India, Pakistan, Burma, Sudan, Egypt, and South Africa just to name some of the big ones.

However, not every territory wanted to become independent. Many small islands didn’t have the population or the economics to justify becoming independent. These bits of the Empire are still around and make up the leftovers of what was once the largest empire on Earth.

In this episode, I’m going to go through the bits of the Empire that still remain and try to go over why they are still there.

The Cayman Islands – With a population of 68,000 people, this is by far the largest British territory in terms of population size. Located south of Cuba and northwest of Jamaica, the territory consists of three islands: Grand Cayman, Cayman Brac, and Little Cayman.

The islands are best known today as a haven for offshore banking.

For 100 years, from 1863 to 1962, the islands were administered as a part of Jamaica. After Jamaican independence, the islands reverted back to a territory of the United Kingdom.

The subject of Cayman independence has come up, but there doesn’t appear to be a lot of demand for it. Just last year the territory’s premiere and its opposition leader, both agreed that the territory is not yet ready for independence.

It should be noted that with a population of 68,000 people, the Cayman Islands would be one of the smallest nations in the world, but not even close to being the smallest former British Territory to become independent.

Bermuda –  Located in the middle of the Atlantic Ocean on approximately the same latitude as Charleston, South Carolina, Bermuda has a long history as a British colony. First established in 1609, it is the oldest British Territory.

The first Bermudan brush with independence was in the 18th century when the debate was whether to join the United States as the 14th independent colony.

As with the Caymans, Bermuda has flirted with the idea of independence but has never taken a serious step towards it. In 1995 the island had a referendum on the subject and 73.6% of the voters rejected the idea.

The debate has resurfaced recently, with the ruling Progressive Labor Party supporting independence.

The Turks and Caicos – If you notice a trend here with lots of islands in the Caribbean, you are not wrong. Six of the largest remaining territories are all in the Caribbean.

In the 1980s moves towards independence were stopped by an anti-independence party and in 2009, the British assumed direct control over the territory due to a corruption scandal.

Unlike the other territories discussed here, the Turks and Caicos have had several different exit strategies other than full independence.

One proposal would be joining the Canadian Federation. Either they could join outright as a territory like the Yukon, or they could just join one of the existing provinces. Nova Scotia has floated the idea, the primary benefit being that it wouldn’t require a change to the Canadian Constitution.

Another option that has been floated has been creating a federation with the Bahamas. Geographically, this makes perfect sense. However, polling showed that the idea wasn’t very popular, and it was never aggressively pursued.

Gibraltar – One of the better known British Territories, it is one of the only territories which is not on an island. Physically connected to the European mainland via Spain, Gibraltar served as the base for the British Navy to control access to the Mediterranean Sea.

Unlike other territories, independence is sort of out of the question for Gibraltar. Spain has claimed Gibraltar as its territory since it was captured in 1704.

The 1713 Treaty of Utrecht ensures that if the British were to ever relinquish Gibraltar, Spain would have the right of first refusal.

The position of the people of Gibraltar is that the Spanish position is irreverent and they point to the UN Charter which grants everyone the right to self-determination.

One recent sticking point has been the UK leaving the European Union. In a 2016 referendum, the people of Gibraltar voted 96% in favor of staying in the EU.

As late as 2019, a BVI envoy to the United Nations on the subject of decolonization said that they weren’t yet ready to make a decision.

Anguilla – I’m going through the list of territories in order of population. From BVI to Anguilla there is a huge jump. BVI has a population of 34,000, but Anguilla only has a population of 15,000. This is at a level where there are only two other UN member states smaller: Nauru and Tuvalu.

Anguilla was joined with St. Kitts and Nevis briefly in 1967 and they wanted no part of the union. They staged a non-violent rebelling and expelled the police from the island of St. Kitts.

Known as the Anguillian Revolution, this is one of the few revolutions in world history that wasn’t about independence, but rather wanting to revert back to being a territory. After the revolution, they were a republic for about a month in 1969, before the British assumed control again.

Today, there has been some talk of independence, especially with the British wanting to exert more financial control over the island, but with a population so small, it would be difficult, but not impossible, to do by themselves.

Sovereign Base Areas of Akrotiri and Dhekelia – This is the oddest remaining territory in the British system. The island of Cyprus became independent in 1960, the British insisted on keeping two small bits of the island for military bases.

Today the bases are used for signal intelligence and as an airbase. The United States has also used the bases here for operations in the Middle East.

The areas have been a point of contention between the UK and Cyprus since 1960. There are no border controls between the areas, and there is no talk of independence, only giving the territory to Cyprus.

Even though the British and Cypriots are adamant about their positions, relations between the two countries are cordial. There have been talks of giving back parts of the territory that are not actively used by the military, but nothing has come of it as yet.

Saint Helena, Ascension, and Tristan da Cunha – We are now truly getting into the tiny bits of the empire. These three islands collectively are one territory, but each is located over a thousand miles from each other in the South Atlantic.

Saint Helena is the largest of the islands and only in the last few years have they even had air access. When I visited in 2015, the airport hadn’t been completed and I had to take five day voyage there by ship each way.

Saint Helena is best known as the final place of exile for Napoleon and where he eventually died.

Tristan da Cunha is the world’s most remote human settlement with a population of 264, and it is only accessible by ship.

Ascension is the northernmost of the three islands and is the location of an airbase, a European Space Agency tracking station, and an American signal intelligence facility.

There is no talk of independence for any of these islands, as they are all heavily economically dependent on the UK.

Montserrat – The last of our British territories in the Caribbean, the recent history of the island is dominated by the 1995 eruption of a volcano that destroyed the island’s capital of Plymouth.

The legacy of the eruption has made the island very dependent on the UK, and there is no talk of independence. In fact, they asked the UN to remove themselves from the list of places to be decolonized.

The Falkland Islands – If you’ve heard of the Falklands, it is probably due to that war from the 80s with Argentina. Here too the population at 3,300 people is so small that independence is out of the question. The biggest political issue is that Argentina claims the islands as its territory.

In a 2013 referendum, the question of remaining as a British territory was put on the ballot. The results were 1,513 in favor and only 3 against.

Culturally, the people there are very British and would absolutely reject any control by Argentina.

One retired Argentine diplomat who recently visited the island admitted that Argentina could never control the island without the support of the locals and that by 2033 the odds are good that they could be independent.

Pitcairn, Henderson, Ducie and Oeno Islands – Not only is this the smallest territory in terms of population, but it is the smallest political unit of its type in the world.

With a population of about 50 people, all ancestors of the mutineers of the HMS Bounty, they reside on Pitcairn in the middle of the Pacific Ocean far from any other human settlement.

This also happens to be the only British territory I haven’t personally visited yet.

While there are some cruise ships that stop, the only regular way to get there is via a cargo ship that travels from French Polynesia every few weeks.

British Indian Ocean Territory – Located in the Indian Ocean, this is a collection of islands which technically do not have a permanent human population. The reason for this is because they forcibly removed everyone who lived there between 1969 and 1973.

They were removed to create a joint US/British military base on the island of Diego Garcia, which is still occupied today.

The nation of Mauritius claims the territory and the people from the Chagos Archipelago who were removed have been fighting a political battle for decades for the right to return.

South Georgia and the South Sandwich Islands – South Georgia lies between South American and Africa, and it is best known for where Ernest Shackleton rescued his men. It also has no permanent human population, save for a seasonal science research station.

Like the Falklands, it is also claimed by Argentina and was actually the scene of a brief battle in April 1982 where 3 Argentine soldiers were actually killed.

It is actually an amazing place, and with a recent rat eradication program, the population of seabirds is rebounding.

British Antarctic Territory – This last territory has had its status put on hold due to the Antarctica Treaty. Nonetheless, the British still have a base in Port Lockroy on the Antarctica peninsula, where the British claims overlap with the claims of Argentina and Chile.

The UK will still issue stamps for the territory, and the southernmost post office in the world is located in Port Lockroy. All of this is done so they can keep their territorial claims alive. I actually sent a postcard from here and it took the better part of a year to arrive.

So you see, what’s left is the British empire isn’t much. The remaining places are so small that they would have a difficult time declaring independence, and for most of them, they are probably more of an economic burden to the UK than anything else.

However, even though there isn’t much other than small islands, in a very technical sense, the sun still doesn’t set on the British Empire.