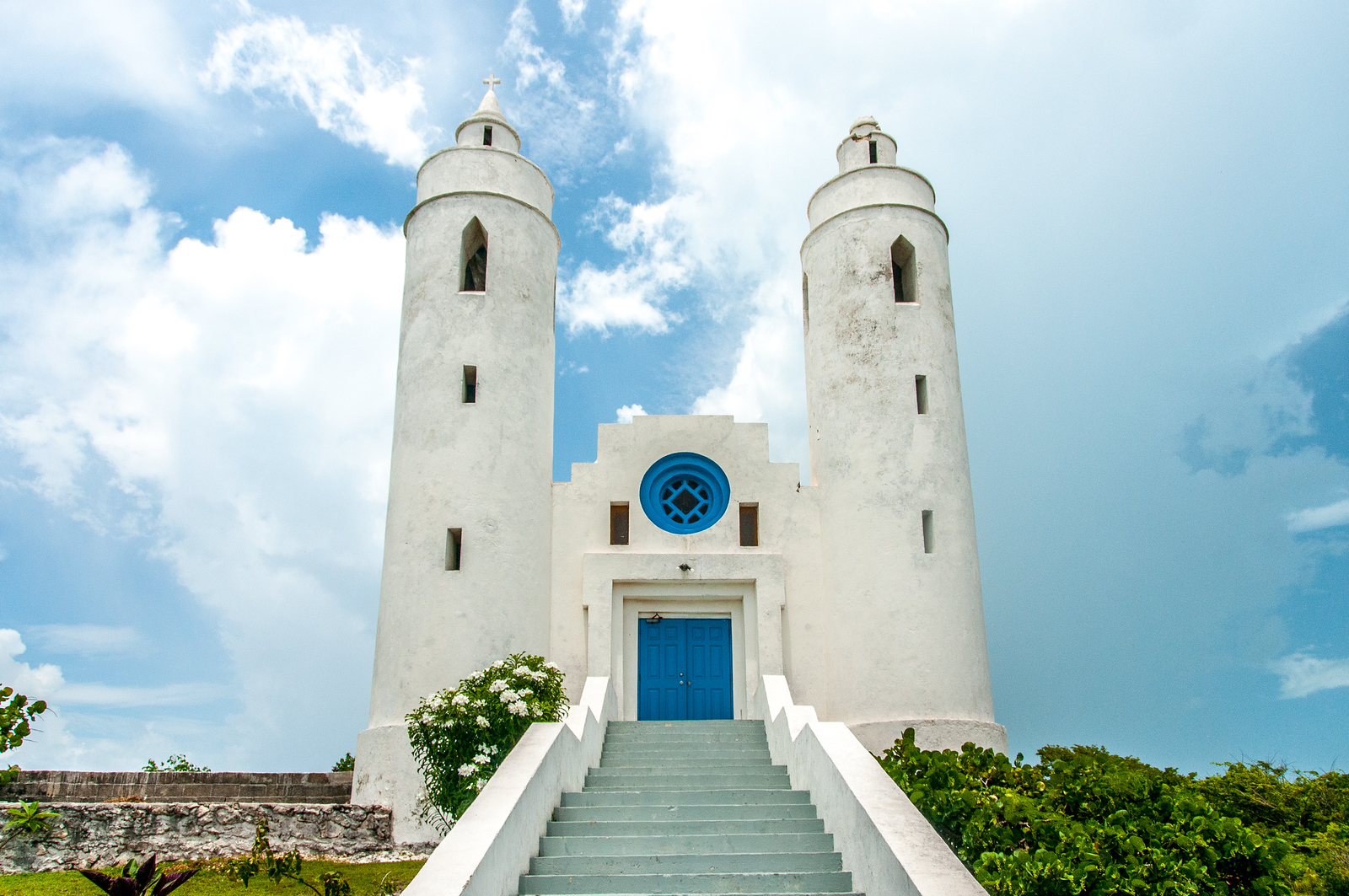 The Bahamas—just saying the word conjures images of pristine aqua waters, white sandy beaches … and cruise ships galore. The Bahamas are a popular tourist destination for many all over the world, but you’d be surprised by how much you do not actually know about this cluster of islands! Whether you’re planning to travel to the Bahamas, or you’re just interested in learning more—it’s the right moment for a new installment of Facts You Might Not Have Known: Bahamas facts edition.

But first, let’s get two questions out of the way.

Where are the Bahamas?

The Bahamas are an archipelago of islands located off the east coast of Florida. There are over 700 islands in the Bahamas, although most of them are uninhabited.

Who owns the Bahamas & is it a U.S. Territory?

The Bahamas is an independent country. It was formerly a British Territory for 325 years. It became independent in 1973 and joined the United Nations during the same year.

Despite its proximity to the United States, at no point was the Bahamas ever a U.S. territory.

1. The name Bahamas comes from the Spanish term “baja mar.”

Baha mar means shallow sea in Spanish. As can be seen in any satellite image, the water around the Bahamas is indeed shallow—the entire region has a delightful turquoise color to it. The turquoise comes from the white calcium carbonate sand and the color of light when it’s reflected off the bottom and unabsorbed by the water. The water around the Bahamas is so saturated with calcium carbonate (the stuff that makes up sea shells) that it will often precipitate directly out of the water.

2. The Bahamas was the landing site of Christopher Columbus.

It is widely believed that Columbus’ first landfall in the new world was on the island of San Salvador. In 1986, National Geographic postulated that he landed on Samana Cay. Either way, the European land rush in the new world began in the Bahamas.

3. The Bahamas has the 3rd highest per capita GDP in the western hemisphere.

After the United States and Canada, the Bahamas is the third richest country in the new world. The largest industry in the country is tourism (which makes sense) and that accounts for a whopping 60% of the country’s income and half of all employment. The Bahamian dollar is pegged 1-to-1 with the U.S. dollar.

4. The Bahamas is the second closest non-bordering country to the United States.

The island of Bimini is only 50 miles from Miami. Only Russia is closer, with the distance between Big and Little Diomede Islands being only 2.5 miles. Regular ferries can actually take you between Miami and Bimini in about two hours flat.

5. It has snowed in the Bahamas.

Yep, close your gaping jaw—it happened. On January 17, 1977, a cold wave swept southern Florida and brought cold weather all the way to the Bahamas. On that day, for the only time in recorded history, snow fell on the city of Freeport on the island of Grand Bahama. The snow didn’t accumulate, but snowflakes did fall!

6. The world’s deepest blue hole is found in the Bahamas.

The Great Blue Hole in Belize’s Great Barrier Reef is probably better known, but Dean’s Blue Hole on Long Island is actually the deepest in the world. Unlike the blue hole in Belize, the blue hole in the Bahamas is right next to the shore. You can go from knee deep water on the shore to a sudden drop off of 202m (663 ft). This is the spot many free divers choose when attempting world records.

7. The Bahamas is one of two countries in the Western Hemisphere that lies on the Tropic of Cancer.

The Tropic of Cancer happens to miss both Cuba and Florida. It does, however, bisect Long Island and Exuma in the Bahamas. Mexico is the only other country in the western hemisphere that it crosses it.

Almost all land in the Bahamas is made of raised coral reefs or sandbars. As a result, there is very little elevation in the entire country. The highest point is ‘Mount’ Alvernia on Cat Island which is a raised, tilted reef. There are only four countries in the world with a lower “highest point” than the Bahamas: The Gambia, The Marshall Islands, Tuvalu, and the Maldives.

9. The Bahamas is the only country with a marching band on their currency.

The Bahamas’ $1 note has an image of the Nassau Police Marching Band on the currency, making them the only marching band in the world to appear on any legal tender.

10. The Bahamas is technically NOT in the Caribbean.

The Bahamas archipelago (aka the Lucayan Archipelago) is technically not part of Caribbean. It is located north of the Caribbean as you can clearly see on a map. The islands were formed from a totally different process than the volcanism that formed the islands in the Lesser and Greater Antilles. The greater region that they would technically be a part of with the Caribbean would be the West Indies. That said, it’s often grouped with the Caribbean because of its proximity and similar climate and history, so you’d be forgiven for thinking it a fact.

11. The Bahamas should have been bigger.

There are over 700 islands in the Bahamas. All of them are some sort of sand or limestone island. Of the 700 islands, only about 30 of them are inhabited. Of the almost 400,000 people who live in the country, about 70% of them live on the island of New Providence, the location of the capital, Nassau.

13. The Bahamas has the biggest Boxing Day celebration in the world.

The big festival in the Bahamas is called Junkanoo, and it is held on December 26 every year. It’s the Bahamian version of Carnival and features bands, parties, parades, floats, and costumes. Given its proximity to Christmas, it is the hardest time of the year to find a hotel in the Bahamas.

14. The Bahamas is one of the best places in the world for cave diving.

Because it’s mostly made of limestone, the islands are riddled with caves that were created thousands of years ago when the seas were over 100 feet lower than they are today. As the sea levels rose after the last glaciation, they became filled with water, making them the perfect place to go cave diving.

The official name of the country is the “Commonwealth of the Bahamas.” The other countries with “the” in their name include:

16. The Bahamas has the seventh highest number of registered ships in the world.

Ships often register their ships in certain countries for tax purposes. These are called “flags of convenience.” The Bahamas is a huge draw for ships because of its laws, especially cruise ships that sail in the Caribbean. If you see a cruise ship in the Caribbean, there’s a good chance that’s flying a flag from the Bahamas.

17. There is no sales or income tax in the Bahamas.

Because of its ship registries and heavy reliance on tourism, the Bahamas collects no tax on income or sales. Most of their revenues from tariffs on imported good and from tourists to visit the country.

Best Books About The Bahamas:

Book Your Trip to the Bahamas

Where to Stay in Nassau
Booking.com is hands-down the best way to book accommodation—it offers the lowest rates, and the massive community of user reviews helps you decide on the exact right place to stay.We’re partial to Ocean West Boutique Hotel on a mid-range budget, the Island House for a beautiful splurge. For a budget beach experience, head out of Nassau to Pigeon Cay Beach Club, which by far offers the best beach resort-for-price experience.

The Bahamas Travel Guide
Our free guide covers everything you should know about booking travel to the Bahamas—what you should do once you’re there, as well as where to stay and more.

Find Interesting Things to Do
Viator, a TripAdvisor property, offers tours all over the world. I also love GetYourGuide, a scrappy booking engine with great prices and a wide selection of tours on every corner of the earth. With so many islands, your best bet is to join a boat tour that takes you to the smaller islands and hidden gems scattered throughout those iconic turquoise waters.

Protect Yourself With Travel Insurance
Although completely safe, the Bahamian islands are remote and if you need medical care you’ll be glad for travel insurance. Travel insurance is the single best way to protect yourself and your trip from unforeseen complications, illness, theft, and more. Whether you’re planning a domestic road trip or an international adventure, book travel insurance with a trusted company. World Nomads is the best for international travelers, adventurous trips, and budget travelers. International Medical Group (IMG) offers great prices for domestic travel, as well as families and seniors traveling the world. The EE team has used both for more than a decade and highly recommends choosing the one that best fits your next trip.

5 thoughts on “17 Interesting Facts About The Bahamas”