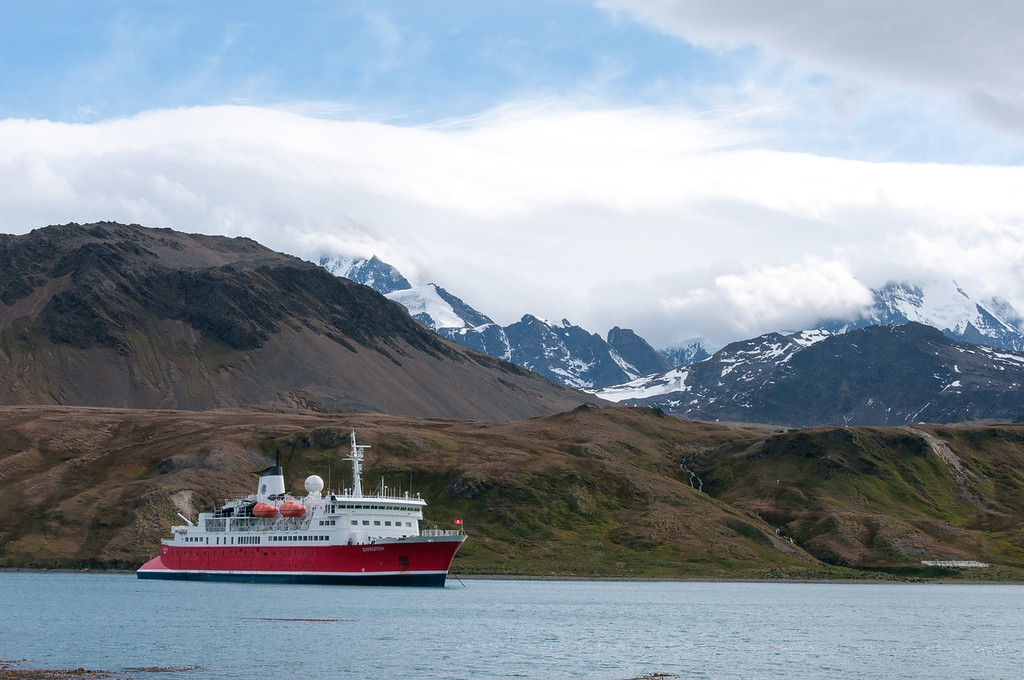 1. It is a British Territory

South Georgia is part of “South Georgia and the South Sandwich Islands,” which is a British Overseas Territory and overseas territory of the European Union. It was first sighted by Captain Cook in 1775, who named it after King George III. It was primarily used as a whaling station between 1905 and 1966. There are no permanent inhabitants of South Georgia, but there is a small scientific staff and a two museum staff at Grytviken who are semi-permanent residents. The Commissioner of South Georgia is also the Governor of the Falkland Islands, who operates out of Stanley. There are South Georgia stamps which are issued for collectors and tourists.

2. South Georgia is claimed by Argentina

Along with the Falkland Islands, Argentina has claimed South Georgia since 1927. They call the island “San Pedro” and their primary claim is based on proximity to Argentina. They have never had any permanent outpost on the island, and their claim is only recognized by a few neighboring countries in South America.

3. It was the site of the southernmost battle ever fought.

During the 1982 Falkland Islands War, Argentina sent troops to South Georgia. The opening battle of the war was Operation Paraquat when the British sent troops to South Georgia to liberate the island. The ensuing naval battle that took place was the southernmost battle ever fought in military history. One Argentine sailor was killed in the operation and two British helicopters crashed. In the initial invasion of South Georgia, one British soldier was killed, three Argentine soldiers were killed, and nine were wounded.

Shackleton’s epic and aborted voyage to Antarctic end up with him and five other men traveling from Elephant Island to South Georgia Island by lifeboat to get help for his crew in 1922. He arrived on the wrong side of South Georgia and had to climb the unexplored mountains of the interior to reach a whaling station to get help. After successfully rescuing his entire crew with no fatalities, they sailed into Grytviken where Shackleton died of a heart attack the next day. He is buried in the Grytviken graveyard where his tombstone can still be visited today. In November 2011, the ashes of his right-hand man, Frank Worley, were interred at his side. If you’re keen on more about this part of the island’s history, Endurance is a phenomenally interesting read.

5. South Georgia has one of the largest populations of penguins and seals in the world.

6. It’s considered part of the Antarctic.

I was talking to the woman who manages the museum in Grytviken about the number of visitors South Georgia gets each year. They currently receive about 5,000 visitors per year, excluding military, shipping, and science personnel. There is no landing strip on South Georgia, so all visitors have to come by boat. Large cruise ships are not allowed, so the average number of passengers per ship is around 100, with the maximum being 250. This makes is one of the least visited territories on Earth.

8. They successfully eradicated all the rats and reindeer.

South Georgia Island had a large problem with invasive rats, which hitched aboard early whaling vessels. As recently as the late aughts, rats had spread to many points around the island and had all but wiped out many nesting sites for seabirds by eating their eggs. When I first visited in 2012, Island scientists were in the middle of what will be the world’s largest rat eradication program in the world. It lasted a decade and cost over $10 million, and it involved spreading tons of pellets with rat poison around the island. They had tested it in several areas around Grytviken and it appeared to have worked—no rats had been seen in two years, and there were signs of South Georgia Pintails in the area. As of 2018, the rat eradication program was considered a huge success and they are successfully wiped out from the island. It’s estimated that 10,000,000 sea birds could return to the island now that the rats are eradicated.

One other invasive species introduced to the South Georgia Island is the reindeer. They were originally brought from Norway as a source of food for the whalers and when I visited there were about 2,000 reindeer on the island. As of 2014, the last of the invasive reindeer were removed because of the negative overgrazing effect their massive herds had on the island. Although most were shot, some were humanely butchered for their meat, and a small portion were moved to the Falkland Islands to preserve their bloodline.

If you’re traveling to South Georgia or the Falkland Islands, then you’ll likely want to pick up a cruising guide that covers South Georgia, the Falkland Islands, and Antarctica for the best advice on what you’re seeing once you’re aboard your cruise. And that’s how you’ll be visiting, aboard a small-vessel cruise ship—the only type allowed to dock in South Georgia. I’ve traveled with G Adventures extensively and highly recommend their 22 day voyage that takes in all three key areas in the Antarctic region.

And if you’re keen to learn more fascinating facts about South Georgia Islands’ history, biodiversity, and landscape, here are our favorite reads.