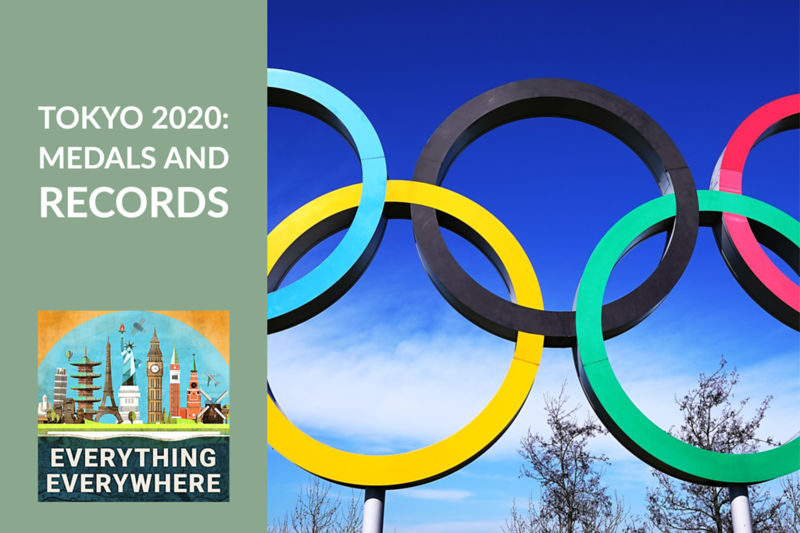 Most coverage of the Olympics is very biased towards whatever country you happen to live in, and certain popular sports.

Lesser sports and accomplishments from athletes in other countries may often be completely overlooked.

So, I figured I’d give a recap of the Tokyo Olympics by putting my very special touch on it, and focus on the exceptional performances across all sports from this Olympics.

So join me as I go through the outstanding medal and record accomplishments of the 2020 Olympics on this Episode of Everything Everywhere Daily.

If you’ve been inspired by the Olympics, wouldn’t you want to improve in your chosen sport by learning from an actual Olympian?

With Masterclass, you can learn directly from some of the world’s best athletes.

Or you can learn skateboarding from Tony Hawk, who I’m sure would have won a slew of medals if skateboarding was in the Olympics when he was in his prime.

There is a lot that is going over the two weeks of the Olympics. A lot of events, lots of competitors, and lots of stories. It is easy for many interesting things to get lost in the shuffle.

Fear not! That is why I’m here. To tell you about what really mattered.

Let’s start off with the person who had the best Olympics overall.

There are two people who I think had what you could describe as a perfect Olympics.

The first is American swimmer Caleb Dressel who won five gold medals in swimming. This is the 10th best individual performance at a single Olympics in terms of medals. The only reason he wasn’t perfect, was because he was actually in a 6th event, the Mixed 4 X 100m Medley Relay.

This is an event with two men and two women, and this was the first year it was held. The US team took 5th.

The person who truly had a perfect Olympics, and it would be very hard to do better than she did, was South Korean archer An San.

Unlike swimming, there aren’t a lot of medals given out for archery, even though they probably could easily double or triple the number if they had different distances and types of bows.

As it stands, there are three possible medals you can earn in archery and An San won three gold medals. She won gold in the women’s individual, women’s team, and mixed team.

Moreover, in all three events, she set an Olympic record.

Archey doesn’t get a lot of attention, but she really couldn’t have done any better.

The Bob Beamon award for the most incredible single performance goes to Norwegian Karsten Warholm, who won the gold in the men’s 400-meter hurdles.

He didn’t just win the gold, he crushed the world’s record. Warholm finished at 45.94 seconds, beating his previous world’s record by .76 seconds, which is an eternity at that level of competition.

The 400-meter hurdle world’s record was last set in 1992 before Warholm came along.

The best teammates award has to go to Sue Bird and Diana Taurasi of the American women’s basketball team. They became the 8th and 9th people ever to win gold medals at five different Olympics, and they became the first teammates to do so together.

However, in the winning-medals-at-a-lot-of-different-Olympics department, the new champion is equestrian Isabell Werth from Germany.

She won a gold medal in team dressage, making this the sixth different Olympic games where she has won a gold medal, making her the first person ever to accomplish that. She has also won more medals than any equestrian athlete in Olympic history.

Just two years ago, Felix gave birth to her daughter prematurely, which required a very dangerous caesarian section. She managed to spring back and win two Olympic medals at the age of 35.

I should also give a mention to Australian swimmer Emma McKeon who won the most medals in Tokyo. She won seven in total: 4 gold and 3 bronze. She is the 10th person to ever win 7 medals in a single Olympics.

If there is one single event that is the premier event of the Olympics it is probably the men’s 100-meter dash. This year it didn’t get as much attention, because the guy who won was rather unknown: Lamont Marcell Jacobs from Italy. No one expected him to win. He didn’t even make the finals of the 100 meters at the last world championships.

It’s the first time Italy has won anything in sprinting.

There were actually a lot of World and Olympic records set in track, and one of the reasons was new shoes and a very high-tech track which was used in Tokyo.

Likewise, there were some major records set in cycling. Cycling is always subject to new records because it is so heavily dependent on technology. In the Women’s Team Pursuit, the German team dropped the world’s record by a whopping six seconds.

In the special category of the best worst performance, the recipient would have to go to American swimmer Katie Ledecky.

She won four medals total, 2 gold and 2 silver, which is by any measure, a great Olympics for anyone.

However, she actually didn’t make the podium for one event, the women’s 200 meters, making the first time she hasn’t gotten a medal at a major event in 9 years. She’s so good and so dominant, that having a very good Olympics for her was actually a step down from her previous performances.

The I-Didn’t-Think-You-Could-Do-That Award goes to Dutch middle distance runner ??Sifan Hassan. She did something that no one else had ever done before.

She was actually a refugee who settled in the Netherlands and didn’t start running until she was 14.

There were several brand new sports at this Olympics. Most notably was skateboarding. The most notable thing about skateboarding is that there were not one, not two, but three skateboarding medalists who were 13 years old.

Not too far off, 14-year-old Chinese diver Quan Hongchan won a gold medal.

FYI, the youngest participant in the games was 12-year-old Hend Zaza from Syria, who participated in table tennis.

Surfing also made its Olympic debut this year. Not much unexpected as both men’s and women’s divisions had former world champions win.

I will note that at the 2024 Olympics in Paris, the surfing competition will be held in Tahiti, 15,700 kilometers away. That will make it the most distant competition from a main Olympic site since the 1956 Melbourne games, when the equestrian had to be held in Stockholm, because of an Australian animal quarantine.

The hot and cold award goes to American Baseball second baseman Eddy Alvarez.  With his silver medal in baseball, he became the sixth person in history to win a medal at both the summer and winter Olympics. He previously won a silver medal in 2014 in short-track speed skating.

Also, winning their first gold medals was Bermuda in the women’s triathlon, the Philippines in women’s weightlifting, and Qatar in the men’s high jump.

However, I want to go out of my way to give very special recognition to the tiny country of San Marnio.

They too won their first-ever Olympic medal. That makes them the smallest country in the world to ever win a medal at the Olympics, taking that distinction away from Liechtenstein by about 4,000 people.

However, that isn’t the end of the story. San Marino wasn’t done. Not by a longshot.

Myles Amine then won the bronze medal in the 86 kg category of Men’s freestyle wrestling.

That means on a per capita basis, San Marino won an Olympic medal for every 11,310 people in the country. By far, the greatest per capita performance in Olympic history.

India, only won 7 medals, the same number as Emma McKeon won individually. Their per capita medals were one for every 197 million people.

That means that San Marino’s per capita performance this year was 17,430 times greater than India’s.