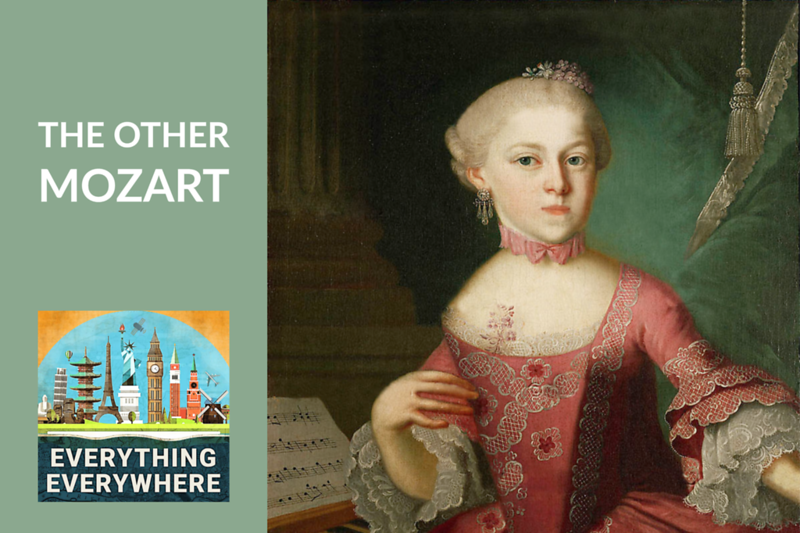 Wolfgang Amadeus Mozart is known to almost everyone in the world. If he isn’t known, then his music certainly is.

Learn more about Maria Anna Mozart, the other Mozart, on this episode of Everything Everywhere Daily.

On January 27, 1756, Wolfgang Amadeus Mozart was born in the town of Salzburg in what was then the Holy Roman Empire.

While he is a celebrity which makes this story interesting, this story is not about him. It is about his older sister, Maria Anna who was born four and a half years before her brother Wolfgang.

However, for this story to truly make sense, we have to take one step back even further and talk about their father, Leopold Mozart.

There, he also learned how to play the violin and the organ.

His parents wanted him to become a priest, but instead to went to Salzburg for university and got a degree in philosophy and law.

His career actually took him into music, becoming a professional musician and writing several musical compositions.

In 1747, he married a woman named Anna Maria Pertl and they had seven children. Unfortunately, five of the children died before turning one.

Leopold got a job as a court musician for the count who ruled Salzburg. One of the major parts of his job was teaching violin, and by all accounts, Leopold was a very good teacher. In fact, teaching music was the thing he was probably best at.

In 1755 he wrote a book titled A Treatise on the Fundamental Principles of Violin Playing, which was published in 1756, the year his seventh child Wolfgang was born. The book became a standard for the teaching of violin during that period, and it showed that Leopold put a great deal of thought into the idea of teaching music.

Around 1759, he began to teach his seven-year-old daughter, now nicknamed Nannerl, how to play the harpsichord.

She proved a very quick learner and soon was playing more difficult pieces.

While she was receiving her lessons and practicing, she was being watched by her three-year-old brother, Wolfgang.

By all accounts, Wolfgang adored Nannerl. As children, they were very close and played together all the time as the only children in the house.

They created their own secret language and invented an imaginary kingdom where they were the king and queen.

It is believed that much of Wolfgang’s development as a musician at this very early age can be attributed to his sister. Wolfgang was emulating what he saw his sister do and she was probably teaching him as well when their father was not around.

Maria Anna wrote later in her life about her brother, “He often spent much time at the clavier, picking out thirds, which he was ever striking, and his pleasure showed that it sounded good. … In the fourth year of his age his father, for a game as it were, began to teach him a few minuets and pieces at the clavier. … He could play it faultlessly and with the greatest delicacy, and keeping exactly in time. … At the age of five, he was already composing little pieces, which he played to his father who wrote them down.”

At some point, the enormity of his children’s talent dawned on Leopold. He wasn’t just the father of two musical prodigies, but this was something that could open doors to royal courts all over Europe.

In 1762, the wunderkind siblings performed for Emperor Francis I and Empress Maria Theresa in Vienna. This was their big debut and their first significant public performance.

It took three weeks to travel from Salzburg to Vienna with two small children, and it put the family deep in debt. However, their performance was a smashing success. Leopold sent home the equivalent of two years’ salary after only a few weeks of performing in Vienna.

With this success, they set out on a grand tour of Europe, visiting royal courts all over the continent. At the start of the tour in 1763, Wofgang was seven and Nannerl was eleven.

At the start of the tour, Nannerl often received top billing. In a letter home, Leopold wrote, “My little girl plays the most difficult works which we have… with incredible precision and so excellently. What it all amounts to is this, that my little girl, although she is only 12 years old, is one of the most skillful players in Europe.”

As they traveled, Leopold basically acted as an agent for his children. It wasn’t just the royal courts in large capital cities where they performed. They would try to arrange a performance in every city they visited and Leopold would often put out notices in local newspapers.

Over the course of three years, the family worked their way across Germany, Belgium, the Netherlands, with their furthest point being London. On the way back home, they went through France and Switzerland.

During this trip, Wolfgang began composing at a furious pace, including writing his first symphony at the age of eight. Maria Anna often helped her little brother in writing down the music he wrote.

They returned home to Salzburg in 1766 and continued to make side trips to earn money, including a return trip to Vienna.

In 1769, Leopold set out again, but this time he only brought Wolfgang with him.

If Maria Anna had grown up in the present day, she undoubtedly would have become one of the world’s foremost pianists.

However, she grew up in the 18th century, and she was subject to the norms and culture of that period. Once she reached an age where she could marry, she wasn’t allowed to perform in public again. To do so would be unseemly.

She actually didn’t get married until she was 33, which means she spent 13 years not performing when she could have been one of the premier musicians in Europe.

We do know that she was composing music, but there are no surviving examples of it. What we do know came from her brother. In a letter dated 1770, sent when Wolfgang was in Rome, he noted “My dear sister! I am in awe that you can compose so well, in a word, the song you wrote is beautiful.”

There is also speculation that she may have collaborated on some of the early compositions of her brother when they were on their world tour.

One lingering question that music historians have is if Maria Anna was a better musician than her brother?

In one of his letters, Leopold wrote, “Nannerl no longer suffers by comparison with the boy, for she plays so beautifully that everyone is talking about her and admiring her execution.”

Many of the surviving flyers promoting their performances had Maria Anna as the star of the act.

While Wolfgang was unquestionably the better composer, it is highly likely that Maria Anna was the better instrumentalist. It wasn’t so much that Wolfgang was bad, but that she was just really really good.

Wolfgang went on to fame in Vienna, struggled financially, and died at the age of 35. He was stubborn and rebellious with his father for the rest of Leopold’s life.

Maria Anna lived with her father until she was married and was always the dutiful daughter.

We know after her period of public performances she did continue to play in private. Likewise, her brother always held her opinion in high regard and would frequently send her copies of his compositions.

After the death of her brother, she made it her mission to preserve the reputation of her brother by donating all of her correspondences with him to his widow who was commissioning a biography.

Later in her life, she became a music teacher, having never lost her passion for music.

For the most part, other than letters and a few other biographical facts, Maria Anna mostly disappeared from history. She passed away at the age of 78 in 1829.

There has been a revival of interest in her story over the last two decades. There have been several movies and books written about her, many of which are fictional.

What we do know about Maria Anna is that she had a profound impact on the development of her brother Wolfgang and that she was a phenomenal musical talent in her own right.

However, we will never know just how great she could have been, and just how far her musical career could have gone.