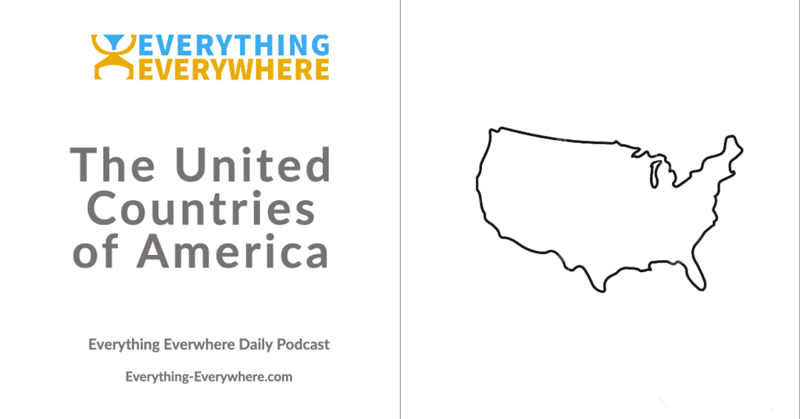 Each of the 50 states in the United States has a unique history. 13 of them were originally British Colonies. Some of them were former Spanish or French territory. Most of them were officially US territories before they became states.

Learn more about the states that were once countries on this episode of Everything Everywhere Daily.

The independent countries which have existed inside the territory of what is the United States have a varied history with some of them being nothing more than declarations by small groups, and others being full blown legitimate countries with embassies in Europe.

I’ll be going through them in order of perceived legitimacy.

The Republic of Fredonia

This short lived republic consisted of the area around what is today Nacogdoches in East Texas. This rebellion was led by Haden Edwards who was granted land by Mexico if he would bring in settlers. The republic was very short lived barely lasting a month. It was declared on December 21, 1826, and the rebellion was quashed by Mexican and Texan forces on January 31, 1827.

The word “fredonia” was originally a term which was proposed as a name for the United States. It has been used as a name for fictional countries, most famously in the Marx Brothers comedy “Duck Soup”.

The Republic of Indian Stream

Located in northern New Hampshire along the border with what is today Quebec, the Republic of Indian Stream was a quasi-independent republic that existed between 1832–1835. Unlike most of the republics on this list, Indian Stream wasn’t trying to break away from anyone. Rather, they were caught between the United States and British Canada. The treaties signed by the US and Britain were very ambiguous as to where the border was drawn in this region, so the people there truly didn’t know what country they belonged to.

Both the US and the British sent in tax collectors, and this double taxation led to the citizens to declare their own republic. Indian Stream wasn’t very big. There were only 300 people, so neither country felt it was an urgent priority, which is why it lasted for 3 years.

A hardware store debt by a British magistrate eventually sparked a riot, which forced the issue. Neither country wanted to go to war over something so trivial, so the British eventually ceded their claims on the region, and it became part of New Hampshire.

This too came about because of people stuck between the British and Americans. The area covered by this government included what is today Oregon, Washington, Idaho, and western Montana.

From May, 1843 to March , 1849 the Provisional Government of Oregon served as a placeholder government until the United States could extend its jurisdiction over the territory. Ambiguity with the border Britain was again the culprit.

The government had their own constitution, issued their own currency, and had their own militia. They just had no intent on the set up being permanent, and it was dissolved with the creation of the Oregon Territory.

The Republic of West Florida

Despite the name, the Republic of West Florida consisted of the counties in what is today eastern Louisiana. It was a short lived entity lasting only from September 23, 1810 to December 10, 1810. Here too, confusion over land rights was the origin of the republic.

There was a single battle fought in 1810 between settlers and Spanish forces, when the settlers took over Fort Carlos in Baton Rouge.

American president James Madison used this as an excuse to send in the military and annex the territory officially. The settlers there weren’t upset with the Americans coming in so much as they wanted to join the country as their own state.

You’d think this would be a much bigger deal considering that the phrase “California Republic” is still on the California state flag. However, the republic only lasted a whopping 25 days from June 14 to July 9, 1846.

When California was part of Mexico, it was very remote and distant from the centers of power and population in Mexico. Much of the land was owned by absentee owners who didn’t live in the region.

Most of the settlers either wanted independence, or to join the United States. A rebellion against Mexico was encouraged by US Army offices which entered the territory.

What the revolutionaries in California didn’t know was that the United States and Mexico went to war in April of that year. The American Navy used the revolt as an excuse to quickly annex what was then the province of Alta California, and that was that.

All of the five republics I just mentioned were all very short-lived and none of them really had any intention of being actual countries. They were mostly placeholder governments while they waited for border issues to be resolved, or for the United States to come in and establish authority.

The next three, however, were in a very real sense independent countries, much more so than the ones previously mentioned.

Vermont was not one of the original 13 colonies. It was originally a French territory and after the end of the French and Indian Wars, the land was ceded to the British by the Treaty of Paris in 1763.

The land was never formally created a colony, nor was it formally attached to another colony. Massachusetts, New Hampshire and New York all claimed the territory.

With the outbreak of the revolution in 1775, Vermonters fought with the Americans. General Ethan Allen lead a group of Vermont militia known as the Green Mountain Boys who fought in the Battle of Saratoga and other campaigns in the Revolution.

Not being a colony, they were not represented in the Continental Congress.

They took matters into their own hands in 1777 and declared themselves independent, initially under the name “New Connecticut”. They earned themselves the nickname “the reluctant republic” because most residents wanted union with the United States, not independence.

The continental congress did not recognize Vermont as an independent country, and only recognized the region as the “New Hampshire Grants”, which were lands sold by the colony of New Hampshire.

In the early 1780s, while the war was still being fought, there were overtures by the British for Vermont to join the province of Quebec. However, with the surrender of the British in 1781 at the Battle of Yorktown, the writing was on the wall. Vermont was surrounded on three sides by the newly independent United States.

On March 4, 1791, Vermont was admitted as the 14th state, and the first state that wasn’t one of the original 13 colonies.

The Republic of Texas

Most Texans will be happy to tell you how Texas was its own republic. For 10 years from March 2, 1836, to February 19, 1846, the Republic of Texas existed as an independent country.

The people of Texas, known as Texians at the time, not Texans, revolted from Mexico and won their independence at the Battle of San Jacinto in 1836. There, the defeated General Santa Ana agreed to remove the military and lobby for Mexican recognition of an independent Texas.

Mexico never recognized an independent Texas, but the United States did in 1837 and declined to annex the territory when presented the opportunity.

France, Belgium, Russia, the Hanseatic League, and the Netherlands all recognized Texas and exchanged ambassadors with the country.

After the US passed the Texas Annexation Act, Mexico agreed to recognize Texas if the British determined the borders, but by this time it was too late.

It should be noted that the Texas Statehood act allows for the Texas legislature to create 4 more states out of the current state of Texas. Legal scholars indicate that these states could be created without additional consent of Congress, as it was already given in the Statehood Act.

The Kingdom of Hawai?i

For every country I just mentioned, becoming part of the United States was sort of in the cards from the beginning given their geography.

This was not at all the case with Hawaii.

It comes as a surprise to most people that Hawaii, as a united political institution, came into its own after the creation of the United States.

King Kamehameha I (a really fascinating guy who is probably worthy of an episode all by himself), united the major islands of Hawaii by force in 1795. The remaining islands joined voluntarily in 1810.

The unification of Hawaii changed the rule of the island from traditional polynesian government to a more European style Monarchy.

Hawaii was recognized as an independent kingdom by the US, Britain, France, and other European Powers. In fact, Hawaii was the first non-European indigenous state to be recognized by European countries.

As with most kingdoms, they eventually had a crisis of succession. In 1872  Kamehameha V died without any legitimate heirs. This led to two consecutive monarchs who were elected, both of whom died shortly after ascending to power.

The second of the monarchs, King David Kal?kaua died in 1891 and he was succeeded by his sister Queen Lili?uokalani. She came to power at very inopportune time.

The 1890 McKinley Tariff, named after then Representative William McKinley, hurt Hawaiian businesses. Hawaii had preferential trade agreements with the US, but the McKinley Tariff removed that.

In 1893 a group of American and European business men led a coup which overthrew the monarchy and set up a committee of safety.  On July 17, 1893, Sanford B. Dole, namesake of the Dole pineapple company, took control of the government and declared the Provisional Government of Hawaii, which was to rule until annexation by the United States, which was their plan all along.

In Washington, President Grover Cleveland felt the overthrow of the Queen was an illegal act of war and didn’t consent to any annexation of Hawaii.

Dole and the parties in charge decided to just wait until the Cleveland administration was over, and created the one party Republic of Hawaii.

With the election of William McKinley as president, the United States did a reversal and started a very pro-imperialist policy which included the Spanish American War, and taking over many of its remaining possessions, including the Philippines, Puerto Rico, and Guam.