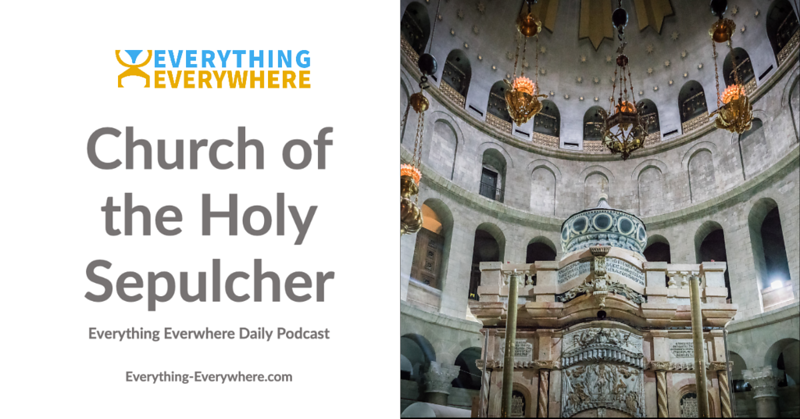 If you ask most Muslims what the holiest site is in Islam, they would probably tell you that it is the Kaaba at the Great Mosque of Mecca.

Ask most Jews what the holiest site is in Judaism is and they would probably say the Western Wall of the Second Temple in Jerusalem.

Ask most Christians what the holiest site is in Christianity, and you might get a blank stare or at least several different answers.

Through most of Christianity, there has been one place that has been widely agreed upon as the holiest site, and it has been the cause of wars and disagreements which have continued to this day.

Learn more about the Church of the Holy Sepulchre on this Episode of Everything Everywhere Daily.

When I began thinking of ideas for episodes, one idea I had was giving the background on some of the most interesting buildings in the world. During the course of my travels, I’ve been able to visit many of them, and none has a more interesting history and backstory than The Church of the Holy Sepulcher.

The Church of the Holy Sepulchre is the building which houses the locations where Christians believe that Jesus Christ was crucified and where he was buried.

As significant religious buildings go, it is pretty unimpressive to look at. It isn’t a massive building like the cathedrals you will see in Europe. Unless you know what you are looking for, you couldn’t pick it out from the rooftops of the Old City of Jerusalem.

The entrance is in a very small courtyard, and it is the only place where you can really take a photo and get an image of the exterior of the building.

This isn’t a building that is interesting because of its architecture. In fact, the church’s layout is very confusing because it was made to conform to natural features in the original landscape. What makes the Church of the Holy Sepulchre interesting is its history and the many oddities from its history manifest itself today in how the building is managed.

The history of the site dates back 2,000 years. I’ll say upfront that there is no way to verify if this was the place where Jesus was crucified and was buried. That being said, this is really the only place that has historically claimed to be the site. More on this later.

In the year 70, the Romans razed the city of Jerusalem to the ground after a rebellion in Judea. This is one reason why there is so very little in Jerusalem today, which can be dated back to biblical periods. The Romans purposely destroyed it.

In its place, they established a Roman colony called Aelia Capitolina. In the spot where the Church of the Holy Sepulchre stands today, they built a temple dedicated to Jupiter. It is unknown if the location was chosen because of its topography or because it was an attempt to quash a growing Christian movement.

Fast forward about 200 years to the early 4th century.  Emperor Constantine legalized Christianity and sent his mother Helena to Jerusalem to search for Christ’s tomb and the true cross.

This is the time period that we can nail down to being the earliest association with the building that exists today.

In 326, Constantine ordered the Roman temple to be destroyed and for the first church to be built in its place. The original building was actually two buildings with a common courtyard. The first covered the site of the crucifixion and the second covered the location of the tomb.

The construction of the first church is what cut away most of the hillside and the rock surrounding the burial cave. For visitors who might expect the tomb to be in a cave, the reality can be surprising, but so much of the rock that made up the hill and cave was totally removed that there is little of the original rock remaining.

This first church was destroyed in a fire in 614 when King Khosrau II of the Sassanid Empire (of what is now today Iran) invaded, and it was rebuilt in 630 by the Byzantine emperor Heraclius.

It was around this time that Islam began its ascent in the region and when the Arabs conquered the Levant. The Arabs at the time were protective of the Christian sites during their rule. Perhaps the best-known example was when one of Mohammed’s companions, the Caliph Umar, refused to pray at the Church because he feared future generations would turn the church into a mosque if they misinterpreted his intent.  He also set down a decree which prohibited Muslims from praying at the site.

Muslim protection of the site was lifted in the year 1009 when the Caliph Al-Hakim bi-Amr Allah of the Fatimid Caliphate ordered the church destroyed. Not only were the buildings completely demolished, but much of the rock which wasn’t excavated from the initial 326 construction was also removed.

Recapturing the Church of the Holy Sepulcher was explicitly one of the reasons for the first crusade. No crusade was considered complete until the crusader worshiped at the church. Godfrey of Bouillon, the first Crusader King of Jerusalem, actually refused the title of king and instead “Advocatus Sancti Sepulchri” (“Protector of the Holy Sepulchre”), which very similar to the title used by the King of Saudi Arabia, Custodian of the Two Holy Mosques.

Fast-forwarding several hundred years to the Ottoman Period, we come to the decree which dictates how the church is controlled today. In 1757, the Ottoman Sultan Abdulmejid I issued what was known as the Status Quo decree. It declared that the control of Christian religious sites would be frozen to what they were at that time. This was done to stop squabbling and fighting among various Christian factions.

For the Church of the Holy Sepulcher, that meant that three denominations were put in control of various parts of the main church area: the Greek Orthodox, the Roman Catholic, and the Armenian Apolostic Church. The Greek Orthodox Church controls the largest part, as Greece was part of the Ottoman Empire and had the most influence. All three churches are allowed to hold mass every day inside the main rotunda outside the tomb.

There are three other churches which are given control over other, smaller parts of the church. The Egyptian Coptic Church, the Ethiopian Orthodox Church,  and the Syriac Orthodox Church.

It should be noted that no Christian church has keys to the front door of the building. Since 1192, the keys to the front door have been held by a Muslim family, as was decreed by Saladin. This, too, was to prevent fighting between Christian groups. This is still done today. I remember being in Jerusalem on Easter in 2009, and I woke up early and saw the man from the Muslim family that holds the keys open the door.

The Status Quo decree has been honored by the Ottomans since its inception, as well as the successor regimes controlling Jerusalem, including the British and Israelis.

The Status Quo decree has been good and bad for the church. On the one hand, it has limited infighting among the various Christian groups. On the other hand, it has locked into place a dysfunction where the different denominations have to agree to get anything done.

One symbol of this is the Immovable Ladder that sits outside on a window ledge above the church’s main entrance. This ladder has sat there since at least 1728 and was frozen in place with the Status Quo agreement in 1757. The earliest known photographs of the church show the ladder exactly where it is today.

The other, far larger, problem has been the dilapidated state of the church. Because everyone has to agree, it is hard to get anything done. As a result, the almost 1,000-year-old building has serious structural problems that have gone unaddressed for decades or centuries.

In particular, the core of the site, the Aedicule, which is the small shine under the main dome which covers the tomb, was falling apart. The Israeli Antiquities commission declared the structurally unsound, which forced the churches to take action and renovate.

In 2016, a team from the University of Athens and National Geographic have made some startling discoveries there, including inscriptions on the base rock which has been covered up by fill and marble for centuries. The inscriptions on the rock indicate that this site was considered the tomb of Jesus at least since the Emperor Constantine, and that it hasn’t moved since then.

I revisited Jerusalem after the renovations were done, and the changes are remarkable. The aedicule has been cleaned, with over a century of candle soot removed, and the walls have been strengthened.

All is not perfect at the Church of the Holy Sepulcher. In 2008 two different fist fights broke out between monks from the Greek and Armenian churches. Evidently, one of the fights broke out when someone moved a chair a few inches.

When the police were called in, they ended up being attacked by the monks as well. Some of the fights were captured on video and are available on YouTube if you are interested in watching monk on monk violence.