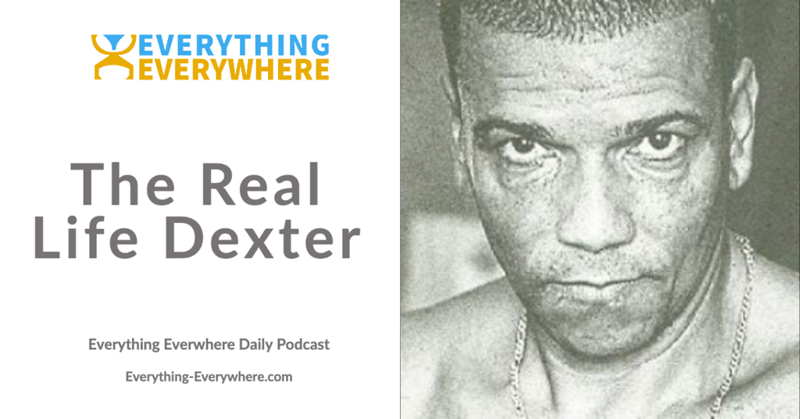 For eight seasons, the TV show Dexter showed the fictional life of a crime solving forensics expert who just so happened to have been a serial killer who killed serial killers.

This got me wondering, has there ever been a real life Dexter? A killer, or even a criminal, who targeted other criminals?

Well, there sort of has been. Learn the story of the real life Dexter on this episode of Everything Everywhere Daily.

The man who has earned the nickname “The Real Life Dexter” was born Pedro Rodrigues Filho in 1954 in the state of Minas Gerais, Brazil.

I should note at the beginning that Pedro Rodrigues is not a hero. Even though he usually had a reason for doing the things he did, it doesn’t mean that his victims warranted being killed, or that the reasons were particularly good.

His life began with one strike against him. He was born with a damaged skull when his father hit his pregnant mother in a fight. Growing up in poverty, it wasn’t long before he had his first brush with murder.

At the age of 13 he pushed his cousin into a sugar cane press almost killing him.

It didn’t take him long to actually kill someone. His first murder was at the age of 14 when he shot the deputy mayor of Santa Rita do Sapucaí in broad daylight in front of City Hall with a shotgun. His reason for doing so was because he had wrongly accused his father, who was a school guard, of stealing food from a school kitchen, and fired him.

He then tracked down the person who was actually the thief, and killed him.

After the murders in his hometown, he fled to the city of Mogi das Cruzes outside of São Paulo, where he began to earn money by robbing drug houses and killing drug dealers, which is always a great way to make money.

While he was there he began living with a woman named Maria Aparecida Olympia, who soon became pregnant. While pregnant, she was killed by members of a nearby gang who wanted revenge on Rodrigues. Rodrigues managed to escape the assassination attempt.

He then regrouped, and with some of his companions, began systematically torturing members of the rival gang to find out who was responsible for the murder.

He and his mates later attended the wedding of the rival gang leader, with the information having been given up by his underlings. At the ceremony, he did his best impression of the Red Wedding from the Game of Thrones and killed 7 people, injuring 16.

He returned home after hearing the news that his mother had been brutally murdered by his father with a machete.

He went to the jail to visit his father where he stabbed him 22 times. After his father lay dead on the ground, he cut out his heart and took a bite, because at that point, why not. If you are going to go down the path of patricide, you might as well throw in a bit of cannibalism as well.

I have no idea how he wasn’t arrested after killing his father in jail, but soon after he committed his next murder.  His cousin had become pregnant by a man who then abandoned her. He hunted the man down and killed him.

On May 24, 1973, Pedro was finally captured by police. Upon his arrest, he was handcuffed and placed in the back of a police wagon with another man who was an accused rapist.

By the time the ride was over and the police opened the door, the rapist was dead.

It was in jail, locked up with hundreds of other criminals, that his career in killing really took off.

Once in prison he was about to be attacked by a group of five other men. He attacked them first, killing 3 of them, and chasing the other 2 away.

He killed at least two of his cellmates while incarcerated. One man he decapitated with a knife. Several serial killers who were locked up with him were either attacked or killed by Rodrigues.

Just to hammer home the point that he wasn’t just a selfless vigilante, he also confessed to having killed one man in prison because he snored too loud and another because he didn’t like his face.

While in jail he killed at least 47 other inmates, and attacked countless others.

In a confined institution full of predators, Rodrigues was the alpha predator.

Oddly enough, after all the murders, this is the part where the story gets weird, and it has to do with Brazilian law.

However, a Brazilian law prohibits anyone from serving more than 30 years behind bars. He had only four years tacked on to his sentence for all the murders he committed in prison. On April 24, 2007, Pedro Rodrigues Filho was set free.

As you might have guessed, he didn’t stay out of jail for that long. By 2011 he was back in custody, but shockingly enough, not for murder, but for crimes committed in prison including inciting a riot and imprisonment.

Pedro claims to have killed over 100 people, but there is only evidence for 71.

Psychiatrists who have studied him have had a difficult time pinning down his condition. Most people would think him to be a classical psychopath, but one trait he has which most psychopaths don’t is the ability to make emotional attachments. In fact, most of his killings were due to some sort of emotional attachment and a need to seek revenge.

A 1982 report on him said that his greatest need was  “the violent affirmation of oneself.” He was diagnosed  as “paranoid and antisocial”, which they probably could have figured out from the tattoo on his left arm which says  “I kill for pleasure”.

Today, at the age of 66, Pedro is a free man and he has a popular YouTube channel with over 138,000 subscribers. He has converted to Christianity and now tries to help young people avoid a life of crime.

However, he has said in interviews that if necessary, he would kill criminals again.