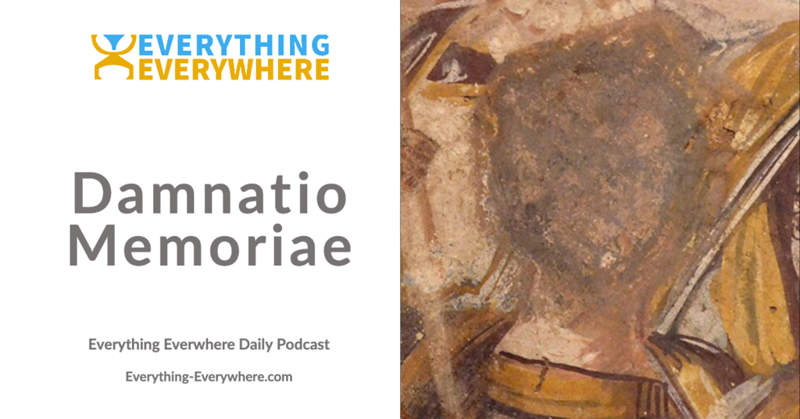 The ancient Romans had a practice called Damnatio Memoriae, which was to banish someone’s memory from public life. It was also sometimes known as oblivion. It called for the complete deletion of the person’s name or image from all statues, inscriptions, coins, and texts.

While the practice neither began nor ended with the Romans, they are ones who gave it the name we used today.

Learn more about the history of expunging people from history on this episode of Everything Everywhere Daily.

The Romans gave us the term Damnatio Memoriae, but the practice dates back well before Rome. Admittedly, it is difficult to determine a history for removing someone from history, because if they were successful, we’d have no idea it even happened.

However, there are several examples we know of from history because their attempts at erasure left marks.

The earliest known example was the Egyptian Pharaoh Hatshepsut, who was born in 1478 BC. One of the very few female rules of ancient Egypt, Hatshepsut was a prolific builder and her tomb outside of Luxor is one of the best Egyptian tombs ever discovered.

However, after her death, in the reign of Thutmose III who she jointly ruled with, an attempt was made to remove any mention of her. At the Deir el-Bahari temple all of her statues were torn down. At the temple of Karnak, there was an attempt to wall up her obelisks. Carvings of her image were chiseled out along its outline.

Egyptologists aren’t sure why there was an attempt to expunge her from memory. It could have been her stepson Thutmose III who wanted to relegate her back to her status as a regent, or it might have been his son Amenhotep II, who resented her for having to wait so long to rule.

It wasn’t soon after in Egypt when the next major Damnatio Memoriae event occured, but this time there is a much clearer reason as to why it happened.

The pharaoh Akhnaten attempted to completely change the Egyptian religious system and replace it with a montheistic system worshiping a deity called the Aten.

After his death, the pharaoh Horemheb attempted to destroy any mention of his reign and all mentions of Akhnaten or the cult of Aten. He was pretty successful too. It wasn’t until the 19th Century that anyone knew about Akhenaten being a pharaoh. He was omitted from the Abydos King List which was created only 100 years after his death, which listed 76 previous kings of Egypt.

In both of these Egyptian cases, they weren’t totally successful. There were mentions of the rulers and statues which were not destroyed, and there was enough for archaeologists to piece together information about their history.

The most famous case in ancient history might be that of Herostratus in ancient Greece. Herostratus burned down one of the seven Ancient Wonders of the World, the Temple of Artemis at Ephesus.

When he was caught, the authorities asked him why he did it, and he said he wanted to immortalize his name. He is believed to have been of low social status, and thought that destroying something great would insure his name would live forever.

Not only was he condemned to death, but they further condemned him to a legacy of oblivion. Any mention of his name in the future would be punished by death, to serve as a warning to anyone who might attempt to do something like this again.

The fact that I’m mentioning the name of Herostratus over 2,000 years later in a podcast gives an indication of just how successful this was. In fact, the word herostratic comes from him and means “fame at any cost”.

The Romans not only gave us the name Damnatio Memoriae, but also put its use into high gear.

It is difficult to tell if Damnatio Memoriae was used on people of a lower social status, because there probably wasn’t much created with their name to begin with, so removing it didn’t take much effort.

For Roman emperors, however, we have plenty of evidence.

The first case during the imperial era was that of Sejanus, who was the right hand man to the Emperor Tiberius. Sejanus was found to be scheming to take power himself, and was responsible for the death of his son Drusus.

When the plot was discovered, Sejanus was executed and his body tossed down the Gemonian Stairs where it was torn to shreds by the mob. His name was then removed from all coins and monuments, and his entire family was killed just to ensure that his lineage wouldn’t continue.

Most of the other instances of Damnatio Memoriae that we know of happened to most despised Roman Emperors after their deaths. The first emperor we know for certain who was given this sentence was Nero. In fact, thee of the four emperors who ruled in the year 69 (known as the year of the four emperors) later had their names and images removed from the public.

Damnatio Memoriae became one of the two default conditions for past Roman Emperors. Almost every emperor either was deified as a god, or was condemned to Damnatio Memoriae. In fact, over a 400 year period, there were only 5 emperors who were neither deified or had their memory damned.

Damnatio Memoriae more often than not backfired. The most noteworthy example from Rome was the case of the Emperor Geta. Geta ruled as emperor jointly with his brother Caralalla after the death of their father the Emperor Septimius Severus.

Caralalla killed Geta, in his mother’s arms no less, and ordered any mention of him to be removed throughout the empire. The problem was, many of the public mentions of his father also mentioned his sons. When Geta’s name was removed, it left a various obvious chiseled blank space.

The Arch of Septimius Severus is in the Forum in Rome today, and you can still see the scars where Geta’s name was removed…..which of course just reminds everyone of Geta.

It was an ancient version of the Barbra Streisand effect.

Damnatio Memoriae is still practiced today, although not to the extent it was in the past.

For example, you will not find many mentions on any official monuments in the United States to the hero of the Battle of Saratoga from the Revolutionary War. In the chapel at the West Point Military Academy there are plaques for all the Revolutionary War generals, except that one doesn’t have a name.

Who is the person who is missing? A guy by the name of Benedict Arnold.

In the 20th Century, Stalin was famous for removing people from photos who fell out of favor. The most famous example was Nikolai Yezkov, who was the head of the NKVD. He was responsible for heading up many of Stalin’s purges until he himself was eventually purged.

There were some photos which had multiple removed over time, until eventually the only photo which survived was one with Stalin by himself.

This use of doctoring photography and editing the past was one of the plot points to George Orwell’s 1984, where there was an entire department dedicated to a dystopian future Damnatio Memoriae.

More recently, several former Soviet republics have removed all public mentions of the Soviet Union. Ukraine has a systematic policy of decommunisiation. All but 2 of the 5,500 statues of Lenin in the country have been taken down. The last remaining 2 are in the Chernobyl exclusion zone.

Of course, I couldn’t do this episode without mentioning the current efforts to take down statues of Confederate Generals and renaming US military bases named after Confederate officers.

If there is anything which history has shown us, is that it is almost impossible to remove someone from the collective memory.

Not only is it hard to eradicate every single instance of someone, but often the lack of mention is in itself mentionable.