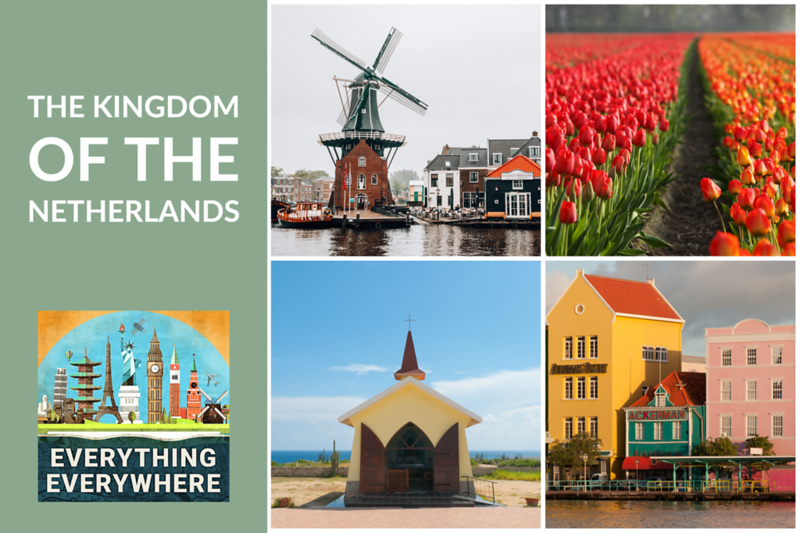 If I say the Kingdom of the Netherlands, you are probably thinking of the country in Europe that is really flat, where they ride bikes, have windmills, and grow tulips.

Well, that is only partially correct. Well, technically 98% correct.

There are other parts of the Kingdom of the Netherlands, and they are actually located closer to Miami than they are to Amsterdam.

Learn more about the Kingdom of the Netherlands on this episode of Everything Everywhere Daily.

Learn how to play chess from Gary Kasparov, or how to play poker from Phil Ivy, gymnastics from Simone Biles, design and architecture from Frank Ghery, acting from Helen Mirren, and filmmaking from Martin Scorcese.

I’ll start by noting that I was very specific in my word usage in the introduction to the episode.

The Kingdom of the Netherlands is analogous to the United Kingdom, in so far as the kingdom is made up of four different countries.

To explain how this came about, I first have to give a whirlwind history of the Kingdom of the Netherlands.

The Netherlands was actually a republic before it was a kingdom. It gained its independence from Spain in 1649 and declared itself a republic. This was the high period of the Dutch trading empire.

This was lead by the Dutch East India Company which established small trading colonies all over the world. This included trading posts in what is today India, Japan, Taiwan, South Africa, Malaysia, and Vietnam.  There was also a Dutch West India Company that operated in the Americas.

The Netherlands was conquered by Napoleon and he established the Netherlands as a Kingdom with his brother Louis Bonaparte as its king.

In 1815, William, the Prince of Orange proclaimed himself king, and the modern Kingdom of the Netherlands was born.

By the time of World War II, the Dutch empire consisted of the Netherlands, the Dutch East Indies, Netherlands New Guinea, Suriname, and several assorted islands in the Caribbean.

The Dutch East Indies became independent in 1949 and is known today as Indonesia. That is a story for another episode, but I will share this fun fact. The Indonesian flag can be thought of as the flag of the Netherlands with the blue stripe at the bottom ripped off. When Indonesians were fighting for Independence, they would often take down the Dutch flag, tear off the blue stripe, and raise the remaining red and white stripes.

Indonesia then took over Dutch New Guinea, and today it is the provinces of Papua and West Papua.

Suriname went from being a colony to a constituent country in the Kingdom of the Netherlands in 1954 and became a fully independent republic in 1975 and left the kingdom.

The remaining Dutch territories were a collection of five and a half islands in the Caribbean. Prior to 1954, these islands were called the colony of Curaçao and Dependencies. In 1954, its name was changed to the Netherlands Antilles and it was a full constituent country of the Kingdom of Netherlands.

The Netherlands Antilles consisted of the islands of Aruba, Curacao, Bonaire, Saba, St. Eustatius, and half of the island of St. Martin.

However, these islands didn’t necessarily have much in common other than being in the Caribbean and having been colonized by the Dutch.

This started to come to a head in 1986 when Aruba left the Netherlands Antilles and became a constituent country in the Kingdom of the Netherlands, bringing the number of countries to three.

The Netherlands Antilles wasn’t a happy marriage. Some of the islands were very far apart from each other and they had very different concerns.

The Dutch addressed this in the 1990s by holding a series of referendums on each island.

Each island was given four options:

The results were sort of all over the place.

As for the smaller islands, Saba and Bonaire voted for closer ties to the Netherlands, and St. Eustatius voted for the status quo.

After lengthy negotiations in the 2000s, the Netherlands Antilles was dissolved in 2010.

The remaining smaller islands became a part of the country of the Netherlands.

Yes, the island of Saba, Bonaire, and St. Eustatius are as much a part of the Netherlands, the country in Europe, as Hawaii is part of the United States.

If you aren’t familiar with the islands, they are geographically in two groups. Aruba, Bonaire, and Curacao are known as the ABC Islands. All three are located off the coast of Venezuela.

Curacao is the largest of the Dutch islands in the Caribbean in both area and population. It has about 163,000 people on the island.

Auba is the second largest in both area and population and it has a population of 116,000 people.

All three of the islands are rather arid. Succulents such as aloe vera are grown on the islands and are the biggest cash crop.

The primary language spoken by most people on the islands is Papiamento. Papiamento is a creole language that was derived from Portuguese and Spanish and it also has elements of French, English, and other languages. This is what most people speak at home and in everyday life.

Most people will also speak Dutch and English. Dutch is the administrative language, and English is taught in schools at an early age as their islands are highly dependent on tourism from the United States.

About a third of the population will also know Spanish given their close proximity to South America.

I found these islands to be some of the most multilingual places on Earth.

The other three islands are about 500 to 600 miles to the northeast of the ABC Islands. They are in the Leeward Islands in the northern part of the Lesser Antilles. Papiamento usually isn’t spoken on these islands. The primary language is English, and most people also know some Dutch and maybe some French.

The main island is Sint Maarten. It makes up the southern half of the island of Saint Martin, with the northern part being part of France. The legend holds that the border between France and the Netherlands on the island was determined by two people walking from opposite points on the islands, and where they met was the border.

Saba and St. Eustatius are two islands that most people aren’t as familiar with. They aren’t very big, they have small populations, and they don’t get many visitors.

Both are located very close to St. Martin. In fact, on a clear day, you can see the islands from each other.

Saba is a volcanic island with a population of about 1,900 people. It is known for its creative names. The island has one main road, which is called “the road”. The capital is at the bottom of a volcanic caldera and it is called “the Bottom”. There is a settlement on the windward side of the island called “Windwardside”.

Saba is also the answer to a great trivia question: What point in the Netherlands has the highest elevation? The answer is Mount Scenery, the highest point on Saba.

It also has the shortest commercial airport runway in the world and the flight from Saba to St. Martin is only 12 minutes. Pilots have to be specially trained to fly there.

St. Eustatius has a great deal of history. It used to be the richest country in the Caribbean back in the 18th century. It was the first place in the world to recognize an independent United States and it was a huge supplier of arms during the Revolutionary War. You can still see the ruins of some of the trading warehouses on the beach, and the ruins of Fort Oranjestad can still be visited.

All of the places I’ve just mentioned in the Caribbean only make up about 2% of the total land area and population of the Kingdom of the Netherlands. For all practical purposes, most of the administrative, defense, and other diplomatic functions of the kingdom are performed by the country of the Netherlands.

It is the Kingdom of the Netherlands which is a member of the United Nations and other international organizations, save for the fact that Aruba has its own Olympic team.

So, the next time you think about the Netherlands, remember that it isn’t just canals and windmills, it is also beaches and volcanoes as well.