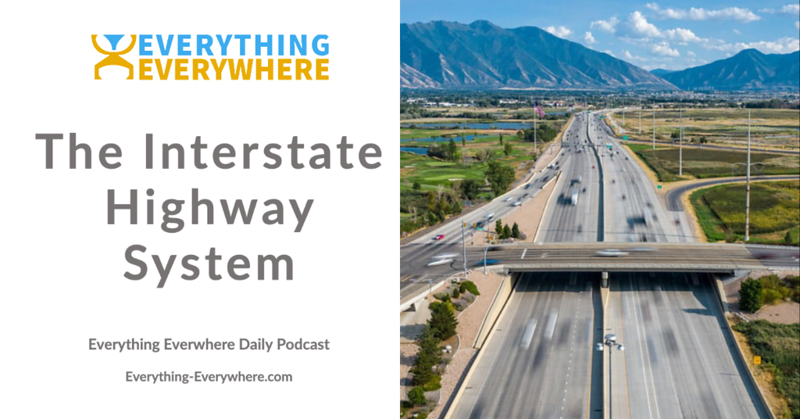 After the end of WWII in Europe, General Dwight Eisenhower was appointed the military governor of the American Zone in Germany.

During his travels around Germany, he noticed that the German autobahn was really good. His respect for the German highways later became the impetus for passing legislation for the United States Interstate Highway System.

Learn more about the road system which many people consider a greater American accomplishment than the Apollo Program or the creation of the Internet on this episode of Everything Everywhere Daily.

By the mid-1950s, the automobile had been around for 50 years. Car ownership rates skyrocketed after WWII, and with hundreds of thousands of soldiers returning home after the war and starting families, demand for road travel exploded.

By 1956 it was possible to travel from coast-to-coast by car, but it wasn’t easy. The highway system in the United States was a patchwork of state roads with varying degrees of quality.

The first transcontinental road across the US was the Lincoln Highway which went from Times Square in New York City, to Lincoln Park in San Franciso. Established in 1913, the road was a private endeavor which mostly was just a route that connected already existing roads together.

Almost nothing on the Lincoln Highway was paved, and getting stuck in the mud was a very common occurrence.

In 1919 the US Army sent a transcontinental convoy from Washington DC to San Francisco to demonstrate the need for better roads in the country. On that convoy was a young Major Dwight Eisenhower, who traveled with the convey which averaged a speedy 5 miles per hour during the trip.

By the 1920s, routes like the Lincoln Highway were replaced by United States Numbered Highway System. This was a system of numbered roads that was coordinated between the states, but the Federal Government had nothing to do with the system. It was and still is, managed by the American Association of State Highway and Transportation Officials.

All of the roads are built and maintained by state and local governments and the only coordination between the states is regarding the numbering system. It was this system that gave us such famous roads as Route 66, which went from Chicago to Santa Monica, California.

When Eisenhower became president in 1953, the National Highway system was a disjointed collection of roads of varying standards and levels of quality. In his presidential memoirs he noted, “During World War II, I had seen the superlative system of German autobahn–[the] national highways crossing that country.”

He wanted a similar system for the United States. There had been plans kicking around for almost 20 years for such a system, but the war had gotten in the way of doing anything.

In 1954 he appointed Lieutenant General Lucius Clay, his right-hand man who oversaw the logistical operations of the Normandy Invasion, to head up the President’s Advisory Committee on the National Highway System.

The Clay Commission developed a Grand Plan which was a $100 billion dollar, 10 years program to connect the country with a network of 40,000 miles of divided highways, connecting every city with a population of at least 50,000 people at the time.

Congress passed the Federal-Aid Highway Act of 1956 which was signed by President Eisenhower in June.

Construction of the first segments of the system was begun in August of that year in Missouri.

One of the major rationales for the program was national defense. In fact, the official name of the system is the Dwight D. Eisenhower National System of Interstate and Defense Highways. Defense was baked into the system from the beginning.

There were several arguments put forward as to why the Interstate system was needed for defense:

The first and biggest reason was legal. Nowhere in the constitution does it stipulate that the Federal government can establish a system of roads. Using defense as the excuse provided legal cover for the project.

Second, there needed to be a way to move troop and equipment across the country quickly, should the need arise.

Third, as it was the middle of the cold war, the Interstate System was thought to be a way people could evacuate major cities in the event of a nuclear attack.

Finally, the system was designed to allow aircraft to use the roads as runways for takeoffs and landings. This actually has never happened other than in the case of an emergency, but it is possible that some straight, remote stretches of interstate could be used as a runway in a pinch.

There are several standards which define the Interstate system and that will be found on every Interstate highway:

Controlled Access: The only way on or off any Interstate road is via an on or off-ramp. You can’t make a right or left hand turn anywhere to get on the road. There are no stop signs or traffic lights anywhere on the road, except in the case of construction. There are no crossroads. Any road which crosses an Interstate must go over or under it. Likewise, there are no train tracks cross the Interstate at any point.

All segments of the Interstate system have at least four lanes with two in each direction.

Each side of the road is separated by a median of at least 50 feet in rural areas, and 10 feet with a concrete wall in urban areas.

The minimum clearance for any bridge or tunnel is 16 feet.

Roads should be designed for a minimum speed of 70 miles per hour or 113 kilometers per hour.

There are a very small number of exceptions to these rules, due to roads being grandfathered in. For example, the Mackinac Bridge connecting the Upper and Lower Peninsulas of Michigan has no median because it was built before the system started.

The numbering of the Interstate highway system is very particular and purposeful.

All routes which go generally north-south are odd-numbered. One example is Interstate 35 which goes from Loredo, Texas to Duluth, Minnesota.

All routes which go generally east-west are even-numbered. Interstate 90 goes from Boston to Seattle.

Numbers for odd-numbered roads generally are lower in the western US and get higher as you go east. Interstate 5 goes from San Diego to Evertt, Washington. Interstate 95 goes from Miami to the Canadian border in Maine.

Numbers for even-numbered roads the lower in the south and higher in the north. Interstate 4 crosses Florida from Tampa to Daytona Beach. Interstate 94 runs from Detroit to Billings, Montana.

This system is the exact opposite of how the state highways are numbered. The Pacific Coast Highway is highway 101, and the highway which ends in Key West, Florida is Highway 1. This was done so no state had two highways with the same number to avoid confusion.

There are some minor exceptions to the numbering system as new roads are built, but generally, the rule holds.

The longest road is the previously mentioned Interstate 90 which is 3,020 miles long, and the shortest road is Interstate 87 in North Carolina which is only 13 miles long. That is not including spur segments. The widest section of the interstate is Interstate 10 just outside of Houston, Texas which has 26 lanes.

Speaking of spur segments, beltways and spurs have their own numbering system. If an interstate road had 3 digits, that means it is a spur or a bypass highway. If the first digit is even, then it is a bypass or beltway road, and the last 2 digits are the main interstate road it connects to. For example, in the Twin Cities, the road which bypasses to the north is 694, and to the south is 494.

If the first digit is odd, then it is a spur road that only connects to the highway at one end. Using the same example, Interstate 394 goes into Downtown Minneapolis and connects with Interstate 694 in the western suburbs.

Despite the name Inter-State, Alaska, Hawaii, and Puerto Rico all have Interstate Highways, even though they don’t connect to another state. Their roads are named with an initial before the road number. H for Hawaii, A for Alaska, and PR for Puerto Rico.

Each state can set its own systems for exits. California was the only state with no exit numbers, but they began numbering them in 2002 when they replaced road signs. Most states number exits based on mile markers, except in the northeastern states, where the exits are numbered sequentially.  Exits and mile markers usually begin at the southern or westernmost state line.

The initial plan for the Interstate highways system was declared finished in 1992, and today there are 48,191 miles of road which the system covers.

I’ll end this trip down the Interstate Highway System with one final note. The entire system, as you would guess, is measured in miles…..except for one single road which is Metric. Interstate 19 from Nogales to Tucson, Arizona has everything measured in kilometers.

The original signs were put up in the 70s when everyone thought the US was going to be moving to the metric system, but it just never happened. In 2004, there was a plan to eventually replace all the metric references to miles, but then businesses objected because it would require renaming all of the exit numbers, and the businesses didn’t want to spend money to change their directions.

As of this year, and I know this because I drove the highway last January, all the signs on I-19 are all still in Kilometers.