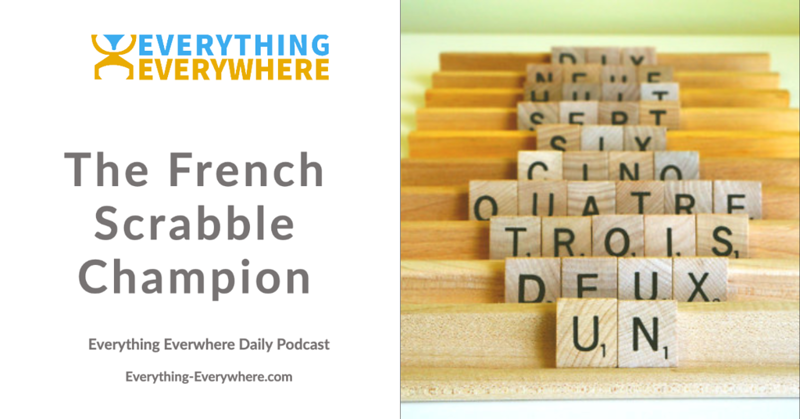 Nigel Richards is unquestionably the greatest Scrabble player in history. The 52-year-old Kiwi is a five-time world champion, and the only player ever to win more than once.

He is a five-time United States Champion and has won more major tournament titles than anyone else.

However, all these accolades are probably not his greatest Scrabble accomplishment. Learn more about what really put Nigel Richards into the pantheon of Scrabble on this episode of Everything Everywhere Daily.

For those of you who are not aware, Scrabble is a board game that is played on a 15×15 grid and the object is to create words on the grid using tiles you randomly select with letters. Think of it as a competitive crossword assembly.

The game was created in 1938 during the Great Depression by American architect Alfred Mosher Butts.  He determined the value of the letters by determining the frequency of how often letters were used. The game was originally called Criss-Crosswords.

In 1948, James Brunot purchased the rights to Criss-Crosswords and paid agreed to pay Butts a royalty on every unit sold. He did some minor modifications to the rules and board, but most importantly he changed the name of the game to Scrabble.

Brunot’s family made each of the games by hand, but it lost money until 1952 when the President’ of Macy’s department store played the game while on vacation and was surprised that the store didn’t carry the game.

From there the game took off, and Brunot couldn’t keep up with the demand, so he sold the rights to the game to the board game company Selchow and Righter. Owner Harriet Righter said “It’s a nice little game. It will sell well in bookstores”

Within 2 years, over four million copies were sold.

Fast forward several decades and a hardcore group of Scrabble players began competing in competitive tournaments. In 1978 the North American Championship was launched, and the World Championship in 1991.

Into this environment, we can now introduce Nigel Richards.

Nigel Richards appears to be a rather unimposing man. Middle-aged, sporting a grey beard, he rarely gives interviews and rarely shows emotion.

Other scrabble players will joke that it is difficult to tell if Richards has lost a game, or has won a world championship.

Growing up in New Zealand, he didn’t play Scrabble until he was 28 when he was introduced to the game by his mother. She said, “she did not expect him to be very good at it because he could never spell well and had not been a particularly good student in English class.”

Within two years of discovering the game, he was playing in competitive tournaments.

In 1998 he rode his bicycle 14 hours from Dunedin to Christchurch, New Zealand, won the New Zealand national championship, and then rode 14 hours back home.

In about 2007 Richards really started killing it in the world of competitive Scrabble.

As noted in the introduction, he has won the World Scrabble Championship five times and is the only person to have won it more than once.

He’s won the United States National Scrabble Championship five times as well, which is more than any other person.

Everything I’ve mentioned is a record and is far above the next closest person.

Scrabble rankings are determined like chess rankings. Nigel Richards holds the highest rating ever at 2,307, and his lifetime competitive winning percentage is close to 75%.

The number of points he scores per game is way above anyone else. If you can average 400 points per game, you are one of the world’s elite players. Richards averages over 450. His average margin of victory is 55 points, and that is mostly against other world-class elite players.

So, I hope I’ve established that Nigel Richards is a very very very good Scrabble player.

However, behind everything I just said, there is one underlying assumption that I haven’t mentioned. Every one of these tournaments and championships has been in English.

Even though Scrabble was initially created with the English language in mind, there are many other variants of the game in other languages that use the Latin Alphabet.  Mattel, the current owners of the game, estimates that there are at least 55 different language versions of the game.

Some of those other languages have competitive Scrabble competitions as well. In particular, French.

Given how good Richards is at Scrabble, this is still an impressive accomplishment. No one else has ever won a tournament in two different languages. To do so requires a mastery of the vocabulary of not just one language, but two.

Yep. He doesn’t speak French. He can’t hold a conversation.

How did he win a world championship in French if he doesn’t speak French?

Well, he just memorized all the words in the French dictionary. All 386,000 words….and he did that in just 9 weeks before the tournament!

Richards has what many would call a photographic memory. Once he sees an image of something he can recall it. In the case of learning French vocabulary, he often has no clue what the words mean, or how they could be used in sentences. He just knows it is a word and it is spelled a certain way. He doesn’t even know how many of the words would be pronounced.

He does, however, know that if he has a certain combination of tiles in front of him, that he can put these words together to score points.

Author Stefan Fatsis who wrote the book Word Freak, a book about competitive Scrabble players, described Richard’s accomplishment as follows: Richards is like “Tiger Woods at his peak – and then Tiger saying, ‘I think I’ll also take up tennis,’ and then win Wimbledon the next year.’”