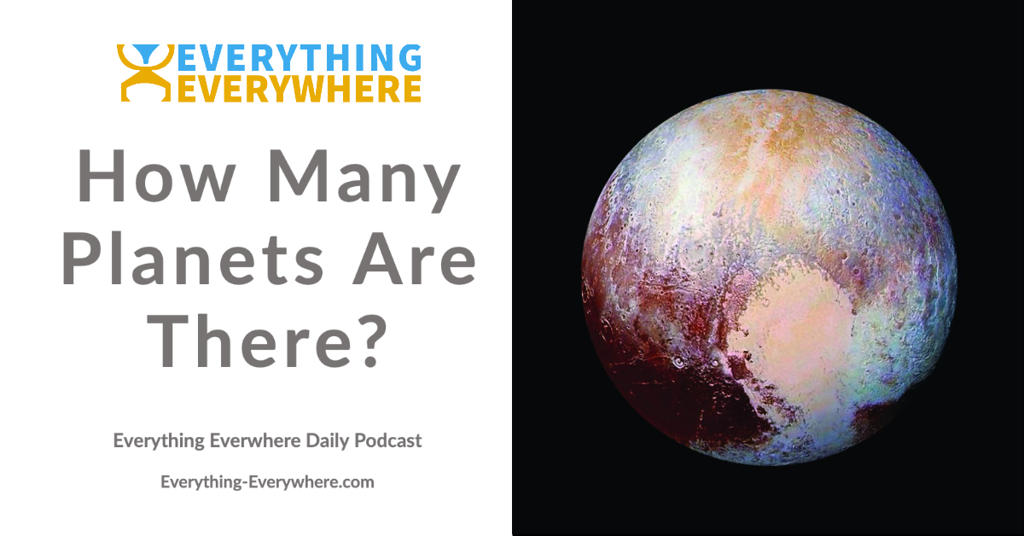 Poor Pluto. It was totally unknown, then it was a planet, and now it’s not a planet anymore.

This change in the status of planets isn’t the first time such a thing has happened. Since the dawn of history, the number of things we call a planet has gone up and down.

Find out why Pluto got demoted from a planet, and learn about our human history with planets on this episode of Everything Everywhere Daily.

Since humans first looked up at the night sky and saw twinkling lights, they noticed that some of the lights were different. They moved. They moved in regular patterns and they could track their movement across the sky over time.

These moving lights were eventually known as planets.

The word planet comes from ancient Greece, and in the Greco-Roman astronomical system, there were seven planets.

Plato spoke of  “the Sun and Moon and five other stars, which are called the planets”.

Ptolemy noted the “the Sun, Moon, and five planets.”

The underlying assumption behind all of this was that the Earth was the center of the universe.

This changed the number of planets from five or seven (depending on how you defined it) to a solid six.

The six planets stood for about 280 years until telescopes became powerful enough where we could see further out in the solar system.

1781 astronomer William Herschel thought he found a comet while observing in the constellation Taurus. It never dawned on him that he found another planet because the planets have been known since time immemorial. He and several other astronomers eventually concluded that it had to be a planet given its movement, and the fact that it didn’t show a tail like a comet.

They named the new planet Uranus, who was the father of Saturn.

This now upped the planet count to seven.

Neptune was discovered in 1848 when deviations in Uranus’s orbit indicated there might be another planet further out. Unlike Uranus, the discovery of Neptune involved several people hunting it down. The discovery is credited to several people who determined its location from the orbital data of Uranus.  Urbain Le Verrier of France, John Couch Adams of England, and Johann Gottfried Galle of Germany are all credited with the discovery.

You are probably thinking that the discovery of Neptune now made 8 planets, but that is not the case.

That was because in 1801 Giuseppe Piazzi discovered a new planet between the orbit of Mars and Jupiter that he called Ceres. That was planet number 8.

Then in 1802, another planet was found in the same orbit of Ceres by Heinrich Olbers, which was called Pallas. That made for 9 planets.

In 1804, another planet in the same orbit was found by Karl Harding called Juno, and that upped the number to 10.

Then, in 1807 there was another planet found in the same orbit by Heinrich Olbers called Vesta, which made for 11 planets.

By 1851, there were now over twenty planets and they were discovering more all in the same orbit as Ceres.

They eventually reclassified all the planets that were in the orbit of Ceres as “asteroids”.  All of these planets weren’t like the other planets. They were much smaller, and all in the same orbit. None of them were big enough to clear out their orbits, so they got demoted.

In 1930 an astronomer named Clyde Tombaugh used the new technique of astrophotography to discovering a moving dot in the sky, which was later named Pluto by 11 year old Venetia Burney from Oxford, England.

Almost immediately after the discovery of Pluto, there was controversy as to if it should be called a planet.

Pluto has a really weird orbit. It is highly elliptical, whereas most of the other planets have near-circular orbits.  It crosses the orbit of Neptune, which no other planet does.

Unlike the asteroids, however, there was no other object like Pluto that they knew of at the time, so Pluto got added to the list of planets. Sure it was a bit different, but it was allowed to be a member of the club.

There were officially 9 planets.

But then something happened.

Just like the rush of asteroid belt discoveries in the 19th century, the early 2000s saw a rush of discoveries beyond Pluto.

There was one discovery in particular which really threw a wrench into things.

Eris, you see, had a mass greater than Pluto.

If Pluto was a planet, then Eris had to be a planet too. It was hard to justify Pluto as a planet and not Eris. That would make 10 planets.

Moreover, all the other objects found beyond the orbit of Pluto were far more like Pluto than Pluto was like the other planets.

This was just like Ceres and the other asteroids all over again, and this was what caused the recent controversy about Pluto being a planet.

The International Astronomy Union voted to define a planet in 2005 by three criteria:

That third part is what separates Pluto from the other 8 planets.

If an object has the first two criteria, but not the third, it is considered a dwarf planet, which is what Pluto is now considered. There are now 9 known dwarf planets.

The discussion on planets has sort of obscured the fact for most people about how much stuff is really orbiting around the sun. If we take a step below dwarf planet, we enter the realm of minor planets which includes pretty much any hunk of rock, there are 794,832 cataloged objects in the solar system as of 2019.

So, it is impossible to have 9 planets anymore. Even if Pluto were to be considered a planet, then Eris would have to be one too. If we let those two in, then we’d have to open the door to a whole bunch of other objects which will almost certainly grow over time, most probably to a very large number.

So rather than lamenting the loss of Pluto as a planet, celebrate its new position as king of the Dwarf Planets.