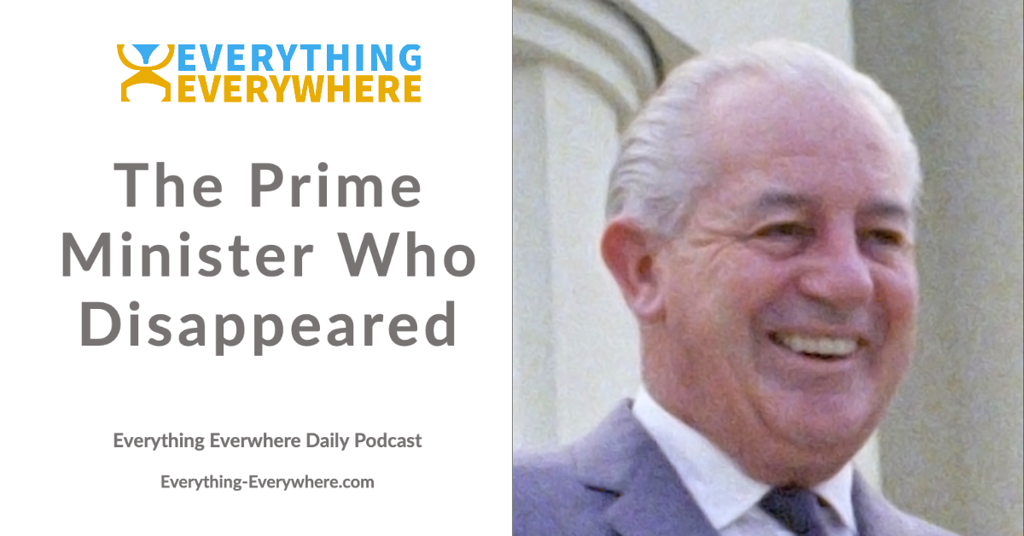 What would happen if a world leader were to totally disappear? As in, the leader of a major country was to just vanish into thin air, without a trace?

Such a thing actually happened 50 years ago when a nation’s prime minister disappeared and his body was never found.

Learn more about how a world leader could just disappear and the fallout from the disappearance in this episode of Everything Everywhere Daily.

Harold Holt was the 17th Prime Minister of Australia. He served for almost 2 years from early 1966 to late 1967.

As Australian prime ministers go, he isn’t really ranked very high. Most historical rankings I’ve seen have him ranked near the bottom, but not quite at the bottom.

He was the leader of the Liberal Party, and he was elected in a landslide in January 1966.

Under his administration, he ushered in several significant changes to Australia. He took the country off of the Australian Pound and on to the decimalized Australian Dollar.

The other big thing he was known for was escalating Australian involvement into the Vietnam War on the side of the Americans. During a visit to the United States, he said he was “all the way with LBJ”, which didn’t play well with the audience back home.

This is not about the highlights of the Harold Holt government, however.

Holt was a regular and strong swimmer who frequently went swimming in the ocean and would go spearfishing. He had an ability to hold his breath for long periods of time, which he would often practice doing during boring speeches in parliament.

When he became prime minister, his closest aides expressed concern about his hobby. His press secretary Tony Eggleton was very worried about the dangers of him swimming in the ocean, to which Holt replied, “Look Tony, what are the odds of a prime minister being drowned or taken by a shark?”

On December 16, he flew from Canberra to Melbourne to do some constituent business, and to take some time off. He met with friends, attended a dinner and a cocktail party, and by all accounts, had a very normal day.

On December 17, he had an early breakfast and then met some friends at 11:15 am and set out to drive to his beach house in Portsea on the Mornington Peninsula south of Melbourne.

Along the way, at 12:15 pm he suggested to the group that they stop and take a swim at Cheviot Beach, a place he had been swimming many times.

Only one other person other than Holt entered the water because the conditions were too rough.

Holt swam out to deeper water….and was never seen again.

By 1:30 Victoria police had begun searching for Holt and it began one of the largest search and rescue operations in history. There were at least 50 divers searching the area where he was last seen, but their efforts were thwarted by the conditions.

Search operations were suspended on January 5, and his body was never found.

The prime minister of Australia simply vanished beneath the waves and was never seen again.

Of course, when anyone noteworthy dies unexpectedly, conspiracy theories will always follow, and the disappearance of Harold Holt was no exception.

Perhaps the grandest conspiracy theory was that Holt was a sleeper agent for the Chinese communists. On the day in question, he was actually picked up by a Chinese submarine and was taken to China where he lived the rest of his life in Beijing. This is a pretty low probability conspiracy consider he supported stopping the spread of communism in Asia, and didn’t personally like Chinese food.

Another conspiracy says that he actually committed suicide because he was about to be blackmailed, or because he was tired of the job. However, his children vehemently deny it as he simply could have resigned the job, and planning a full day of activities and swimming with friends at a beach you regularly visit, is an odd way to kill yourself.

Another theory says that the woman he was with that day, Marjorie Gillespie, was actually his lover and they were having an affair. The plan was to fake his death so the two could run off to live in France.

Another theory pins the blame on the CIA because you can’t have a good conspiracy without the CIA. This one says that the CIA killed him because he was going to pull Australian troops out of Vietnam, and/or because he wasn’t going to kick the United States out of military bases in the country.

A final conspiracy says he was murdered by North Vietnamese agents who poisoned him with never gas, which caused him to drowned.

What all of these theories have in common is a lack of evidence.

Since the disappearance of Harold Holt, it has become a topic for black humor in Australia. The writer Bill Bryson called it “the swim that didn’t require a towel”.

One Australian rugby league commentator said of the perpetually losing Cronulla-Sutherland Sharks, that “waiting for Cronulla to win a Grand Final is like leaving a porch light on for Harold Holt”.  After that statement, opposing fans would bring pictures of Holt to games to taunt the team.

The case file on the disappearance of Harold Holt was eventually closed in 2005 with the local coroner reporting the following: “Mr Holt took an unnecessary risk and drowned in rough water off Cheviot Beach […] there is nothing of significance in any of the material gathered that would indicate anything other than drowning occurred”