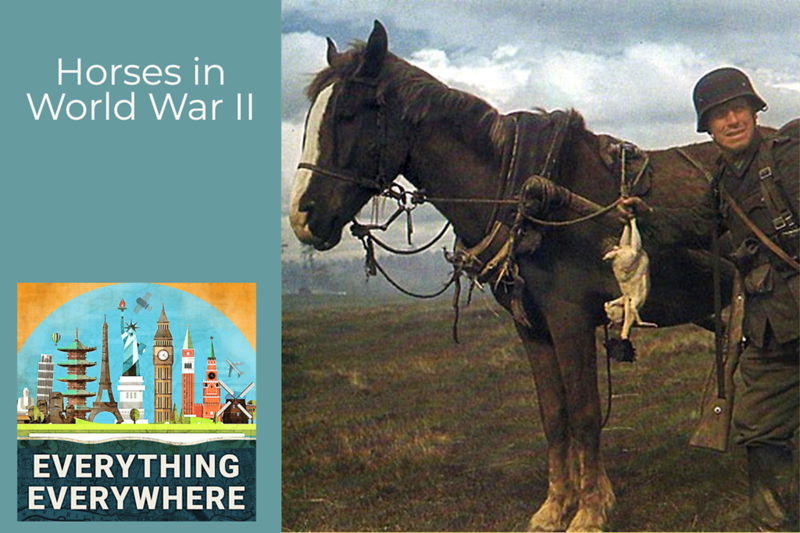 However, there is a part of the war which is often overlooked—aspects of ancient warfare which played an important part in how the conflict was fought.

Learn more about horses in the second world war, their surprising numbers, and their important role in this episode of Everything Everywhere Daily.

If the subject of horses in World War II seems odd for an episode, it is only because we don’t think of the second world war as a horse war.

Before the 20th century, almost every war involved horses to some degree. Whether it was heavy cavalry, light cavalry, or draft animals carrying equipment, horses were a major component of almost every major army for thousands of years.

With the advent of the 20th century, motorized vehicles took over the role which horses once held. Trucks could carry more equipment further and faster.

Motor vehicles could also be armored, allowing for tanks and armored personnel carriers. Something which was practically impossible to do with a horse.

Yes, vehicles needed fuel, but then again, so did horses. While a horse can graze on grass, if you want to get to where you are going quickly, you will need some sort of grain that supplies more energy than grass does.

When asked what the last war was where horses played a major role, I’m guessing most people would probably say World War I.

During the first world war, motor vehicles were just beginning to take hold, so horses were definitely used during the war. Estimates have placed the total number of horses used during the First World War at somewhere around six to eight million.

One of the major traditional uses of horses was to deliver supplies. In World War I, much of the heavy lifting of supplies were handled by railway.

The distribution of horses between the various belligerents was relatively equal. The Americans contributed about a million horses to the war effort. The Germans had about a million, as did the British, Austrians, and Russians.

Mountain cavalry attacks no longer made sense in a world where belt-fed machine guns could fire from a protected trench.

Many horse-mounted cavalry units were converted to what became known as armored cavalry, which was just a fancy way of saying “tank.”

The country which first moved to transition away from horses was Britain. One of the events that necessitated this move was Ireland’s independence, where Britain had gotten much of its supply of horses.

The United States also transitioned away from horses in the interwar period.  The US had the luxury of being the world’s largest oil producer at the time, so they were able to transition to vehicles easier than most countries.

By the beginning of World War II, the United States only had a single horse-mounted cavalry unit, the 26th Cavalry Regiment. The unit was stationed in the Philippines.

On January 16, 1942, Lieutenant Edwin P. Ramsey ordered the last cavalry charge in American history on Japanese positions in the Filipino village of Morong.

The French Army did not entirely motorize. They developed a hybrid approach that used both vehicles and horses. Other European countries, such as Bulgaria, Hungary, and Romania, followed the French model.  Austria and Czechoslovakia took a similar approach but with more horses.

Another issue was the size of units and their vulnerability. A mechanized division would take up 52 kilometers of road if it were on the move. An equivalent horse-mounted unit would only be about 11 kilometers.

The Japanese weren’t very reliant on horses either. They were used in China and some other territories which they controlled, but they were never what you’d call a “horse power.”

So far, I probably haven’t painted a positive picture of the use of horses in World War II, at least by focusing on the western allies and Japan. Other than France, who quite frankly wasn’t involved in the war very long, the US and the UK were beyond horses by the start of the war.

You might have noticed that I haven’t mentioned two countries that were major players in the war, Germany and the Soviet Union.

These countries used a LOT of horses.

It surprises many people that Germany used so many horses. They were the innovators of the blitzkrieg, which involved rapidly moving, mechanized units.

The truth is the German Wehrmacht used 2.75 million horses, which is almost double the number that they used in the first world war.

I should probably do a future episode on the German blitzkrieg, but suffice it to say that the power of the blitzkrieg has been dramatically overblown. The German Historian Karl-Heinz Frieser noted that  “the image of the German ‘Blitzkrieg’ army is a figment of propaganda imagination.”

So, yes, German mechanized forces did move through Poland quickly. That is the part that everyone remembers. What is often forgotten is that everything else, including all of the artillery and infantry, followed behind either on foot or being pulled by horses.

Motorized units represented only ten percent of the German military.

This is something that is seldom depicted in war films or in documentary footage from the war.

When Germany invaded France in 1940, despite their success, their mechanized units vastly outran their soldiers, mounted and on foot.

Documents from the German military showed that in 1943, two years after the invasion of the Soviet Union, an average German infantry division consisted of 256 trucks and 2,652 horses.

One of the reasons why the Germans couldn’t advance faster through Russia was because of how slow their horse units were.

One of the significant German problems at the Battle of Stalingrad, and in other urban battles, was the inability to find feed or grazing ground for their horses.  During a siege, horses had to be sent to the rear, which hampered their ability to move artillery.

The Germans also had limited cavalry units, all of which served on the Eastern Front.

One interesting bit of trivia, on September 23, 1939, outside Krasnobród, Poland, the last battle ever between two cavalry forces took place.

Most of the other mounted cavalry units were used for civilian control or when fighting in mountains.

While the Germans had a large number of horses during the war, the Soviets actually had more.

The Germans basically had very little in the way of petroleum production, which was one of the reasons why they relied on horses.

The Soviets had ample petroleum production but were lacking in horses.

Despite that, the total number of horses used by the Soviet Union during the war was approximately 3.5 million.

When the Germans had a 10 to 1 ratio of horses to vehicles in 1943, the Soviets had a ratio of about five horses to every one vehicle.

Horses, in particular dead horses, were a ubiquitous part of the eastern front. One German soldier was reported to have said, “A curious odor will stick to this campaign, this mixture of fire, sweat and horse corpses.”

The total number of horses used in World War II by all parties was somewhere in the neighborhood of 6 to 8 million. Depending on how you do the accounting, World War II might have been the largest military conflict with horses in world history.

The reason why there were more horses used in the Second World War, compared to conflicts like the US Civil War or the Napoleonic Wars, was simply the scale of the conflict. It was a bigger war with larger populations.

Germany’s failure in the Soviet Union showed that a modern, mechanized army could no longer rely on horses. Despite Germany’s initial success at the start of the war, it was in spite of their large reliance on horses, not because of it.

After the war, the use of horses in combat dropped quickly and dramatically.  The US Army horse breeding program was ended in 1948, and all assets were transferred to the Department of Agriculture.

Horses because used almost exclusively for ceremonial purposes. There have been minor uses of horses used in war since the end of World War II.

There was a small battle in Afghanistan by US special forces in late 2001 where they attacked a Taliban stronghold on horseback, but that was neither planned nor regular.

The day of the horse in warfare is long over, but that ending didn’t happen until after world war II, perhaps the greatest war involving horses in history.

Today’s review comes from listener Aaron. Ten from Apple Podcasts in the United States. They write:

This podcast is the best podcast in the history of the internet. Trust me, after binge-listening to the last 845 episodes, I now know everything about everywhere. Gary mixes accurate information, historical facts, and adds just a dash of humor to make this delightful podcast. I have to say that I am a little sad though, as I can no longer binge Gary’s episodes. Today I officially joined the Completionist’s Club! Gary, I will await my electronic key to the clubhouse, an instructional video on the secret handshake, and my official certificate of completion. I hope everything is still flavored in pumpkin spice :)

Keep up the great work Gary!

Thanks, Aaron! I hate to inform you that pumpkin spice was only for a limited time only in October. The good news is that we will have free McRibs on the menu during their farewell tour….their third farewell tour.