Romania is a country located in Southeastern Europe. It borders Bulgaria, Ukraine, Hungary, Serbia and Moldova, as well as the Black Sea. There are almost 20 million people living in Romania, which is ranked 7th in population. The tourism in Romania focuses primarily on the natural landscape and rich history, of which you should explore when you travel to Romania.

The landscape of Romania is filled in majority by the Carpathian mountains (mostly in the northern side of the country). Meanwhile, the south features the Danube Valley prominently. The capital city of Romania is Bucharest. As of 2014, the economy survived through the industry as well as other sectors including retail trade, food and accommodation services, human health, social work and transport industries. The top export partners of Romania are Germany, France and Italy while most of its imports are from Germany, Hungary and Italy.

Official Language: Romanian is the official language of Romania.

Airport/s: The Henri Coanda International Airport in Bucharest is one of the busiest international airports in Romania. This also serves as the main hub for international flights that travel to Romania.

Driving: In Romania, you must drive on the right side of the road.

Crime: The rate of crime in Romania is quite low, especially when it comes to violent crimes. Human trafficking is one of the more pressing criminal issues in Romania.

Electrical Adapters: In Romania, the electrical supply is powered by 230 volts at a frequency of 50 Hertz.

Trivia: Romania is best known for being the home of Count Dracula, which is a fictional character created by Bram Stoker and is based on prince Vlad Tepes or Vlad the Impaler. Vlad is a Romanian prince known for impaling his enemies.

The cuisine of Romania features a combination of qualities from various cultures it has come into contact with. The greatest source of influence to Romanian cuisine is the Ottoman cuisine. For example, the meatballs were introduced to Romania by the Turks. 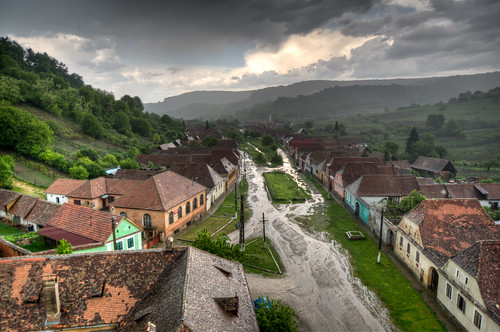 Meanwhile, the musaca was brought to Romania by the Greeks like the snitel was introduced by the Austrians. The mamaliga is one of the most popular forms of meals to be part of Romanian cuisine. This dish is similar to a polenta although it is often served on its own or with a few side dishes. Pork is a popular type of meat in Romanian cuisine and the next most popular is beef.

As part of their tradition, every rural family in Romania will slaughter a pig. And using the meat and various parts of the slaughtered pig, they are able to cook various dishes including carnati (which is dry cured or smoked sausage), tochitura (pan fried cubed pork served with wine and mamaliga), jumari (dried pork after the fat has been rendered), etc.

Soup is also a popular dish in the Romanian cuisine and there are several variations of it.

Bran Castle – This castle is one of the biggest icons in Romania. It is located in the town of Bran, which served as a former royal residence and is also the castle that allegedly inspired the legend of Count Dracula. This castle was built way back in the 14

Peles Castle – This castle was built in 1873 but wasn’t opened until 1914. It features a Gothic revival and Renaissance Revival architectural style. The castle served as the residence of King Charles I and has a museum filled with national heritage artifacts.

Arcul de Triumf – This triumphal arc is located north of Bucharest. It is a wooden arch that was built after Romania gained independence. The victorious troops marched under it during the independence ceremony. The arch is 27 meters high and has internal stairs so that tourists can get a view of the city.

Sphinx – The Romanian Sphinx is a natural rock formation within the Bucegi Mountains. It is located at 2,216 meters above sea level. You can get to the Sphinx within 10 minutes walk from Babele.

Scarisoara Cave – This is one of the biggest ice caves in the world. It is located within the Apuseni Mountains and is considered one of the natural wonders in the country.

1 thought on “Travel to Romania”