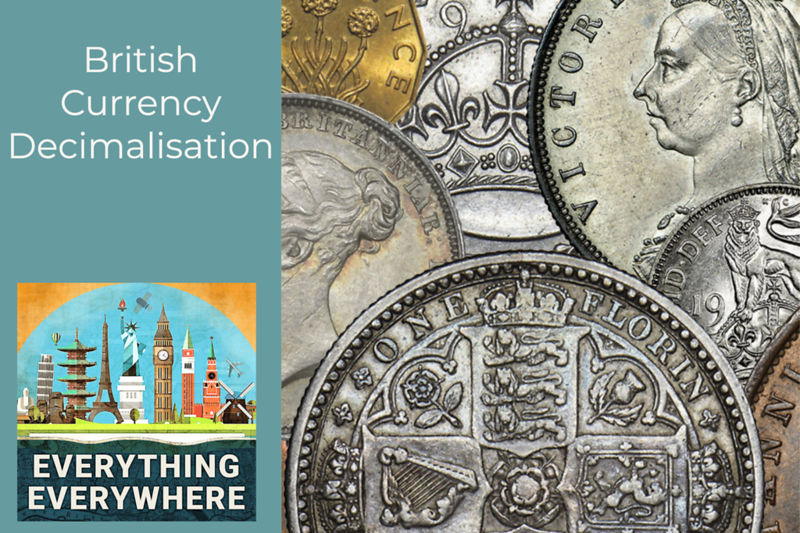 On February 15, 1971, the United Kingdom had a landmark day in its history.

On that day, the country’s currency was changed after centuries of stability. It was a day that was the result of years of planning.

Learn more about Decimal Day and British Currency Decimalization on this episode of Everything Everywhere Daily.

If you remember back to my episode on the origin of the US dollar, it was one of the first currencies in the world to decimalize. A decimalized currency just means that the units below the base unit would be divided up into sub-units on something base 10.

This was actually not the norm as late as the 18th century. Russia was the first country to establish a quasi-decimalized currency in 1704 when Peter The Great established the ruble as being worth 100 kopecks.

Most countries eventually changed over to a decimalized currency. It was much easier to count, easier for making prices, and much easier for conversions if everyone was using the same numeric base.

One of the last countries to decimalize their currency was the United Kingdom.

The UK, for centuries, used what was known as the LSD system, which stands for pound, shillings, and penny.

…and if you are curious how pounds, shillings, and pence make an acronym such as LSD, that its because it actually dates back to Roman times, and the original words were librum, solidus, and denarius.

The Roman system was changed to a sliver pound, shilling, penny system by Pepin the Short, who was the father of Emperor Charlamagne. It was also known as the Carolingian monetary system.

This was the system that was used in England and later in all of the United Kingdom for centuries.

Before I get too far into the weeds about how the transition occurred, I should explain just how the coinage system in Britain worked so you can appreciate just how confusing it was and why it was changed.

The base unit of currency was and is still is, the sterling. The pound and the penny were units of sterling. Most people assume that the unit of British currency is called the pound, as that is what it usually goes by, and what I’ll use for this episode. The abbreviation in foreign exchange is GBP, which stands for Great Britain Pound.

A pound of sterlings was just a weight applied to the coins.

The sterling is the world’s oldest currency which is still in use.

A pound was worth a lot of money centuries ago. A common worker or farmer might never use a full pound daily. The primary unit that most people dealt with was some multiple or fraction of a penny.

A predecimalization penny was worth 1/240th of a pound. A penny is singular, and the plural is pence.

When prices were listed in pence, they would have the number followed by the letter ‘d’. The ‘d’ harkens back to the l-s-d system.

Below the penny was the half-penny, which was known as a ha’penny, and a farthing, which was worth a quarter-penny.

Two pence was known as Tuppence. Three pennies were known as threepence or Thru’pence.

Six pence was known simply as sixpence or sometimes known as a tanner.

Prices would usually be listed as one number with a slash followed by another number. So 2/4, or 2s4d, would be quoted as two shilling, four pence.

There were yet more coins beyond the shilling.

A two-shilling coin was known as a florin.

A crown was 60 pence or three shillings, and a half-crown was worth 30 pence.

There was also another coin called a guinea. A guinea was also a gold coin with a quarter ounce of gold which was minted between 1663 and 1814.

So, you can probably see how all the various coins and fractions of a pound could be confusing, especially in a world where almost every other country had decimalized.

On top of the confusion, there was the issue of inflation. The quarter penny farthing coin, worth 1/960th of a pound, was still minted in 1956, even though the coin was pretty much worthless by this time.

The halfpenny was still being minted up to 1967.

Efforts to decimalize the pound went back quite a while. The first attempt was made in 1824 in response to the creation of the French Franc.

Nothing happened, but the Decimal Association was formed in 1841, which had the dual purpose of decimalizing both the British currency and measurement system.

In 1851, the Great Exhibition once again increased interest in decimalization, but nothing was done.

In 1857, a Royal Commission was established to explore decimalization, and again, nothing was done.

There was an 1862 parliamentary commission on the subject, which again did nothing.

The Royal Commission on Decimal Coinage was inaugurated in 1918, which recommended dividing the pound into units of 1,000 which would be called a mil. Nothing was done.

Real decimalization change didn’t start to happen until the 1960s. South Africa had undergone decimalization, and more people in the UK realized that it was something that could and now should be done.

In 1961, the Committee of the Inquiry on Decimal Currency was established.

Everything was on the table, including replacing the pound itself. Ideas for a new currency included names such as new pound, the royal, and the noble.

According to legend, the decision was made during a 20-second conversation between Chancellor of the Exchequer Jim Callaghan and Prime Minister Harold Wilson. It was announced in parliament in 1966.

Because the pound was used as a global reserve currency, the decision was made to keep the pound and just to just change to a new penny.

The new penny, usually called the pence even though that is technically the plural of penny, would be worth 1/100th of the pound.

Because the pound wasn’t changing, it was possible to introduce the new coins over a period of time.

In April 1968, the 5 and 10p coins were introduced. These were purposely the same size, shape, and material as the old one and two-shilling coins. The one and two shilling coins ceased being minted and were taken out of circulation as they came into banks.

In October 1969 the 50p coin was introduced and the 10 shilling note was withdrawn.

With the 5, 10, and 50 p coins in circulation, it would pave the way for the big day, which was set to be Monday, February 15, 1971. The date was picked because it was the slowest time of year for the financial system.

There was a huge publicity campaign to get everyone ready for the big day. There were songs written about decimalization, and there were shows on the BBC and ITV which ran explaining decimalization prices.

On the afternoon of Wednesday, February 10th, all the banks in the country were closed and remained closed for the next four days.

The bank holiday was used to stock all the banks with the new coins as well as to make sure that all checks that were deposited under the old system could be cleared before decimalization started. Finally, all of the bank accounts had to be converted to decimals.

Changing all of the account balances was time-consuming because few banks were computerized at this time.

The extended bank weekend was also used for shops to change their prices. Many establishments had already begun posting both LSD prices alongside decimal prices, with the old prices listed first. These were now switched so that decimal prices were now listed first.

The day itself went rather smoothly. Three new coins were released: the half-penny, penny, and two-pence.

Old coins were accepted, but new coins were given as change so they could retire older coins as quickly as possible.

The old coins were legal tender for years after Decimalization Day. The sixpence coin wasn’t removed until 1980.

One and two-shilling coins were still legal until the 90s.

It is of note that after the Republic of Ireland became independent, they created the Irish Pound, which used similar coinage to the British. They also had their own decimalization day on February 15, 1971.

Decimalization doesn’t seem like that big of a deal, but it actually was a really big deal for the British economy. They were by far the largest economy to undergo this process when they did it in 1971.

Today, after fifty years of a decimal currency, all but a few older British people could probably navigate the old prices anymore. Decimalized currencies are now the norm in every country in the world except for Madagascar and Mauritania.

So the next time you watch a movie or read a book that talks about shillings, farthings, and crowns, you’ll have a better idea of what they were, and also why they got rid of them.

Today’s review comes from listener daveformtx64 from Apple Podcasts in the United States. They write:

I found this podcast last summer and became a completionist member within about 8 weeks. When I am recommending this to my friends I say “what other podcast covers Ancient Rome, uranium, and the Louvre all in one week.” Gary is full of great information and covers it all in about 10 minutes. I like how Gary will point out his corrections…. He already mentioned his Bill Buckner brain fart, but in the same episode he said a statue of William Pitt was on top of Philadelphia City Hall, when we know it is William Penn. However, todays error was unforced. If you know that Nixon appointed Ford to be VP, how could you miss that Ford appointed Rockefeller once he took over after the Nixon resignation. Keep it up, it is a great podcast.

As for other podcasts that cover Ancient Rome, uranium, and the Louver, I would highly recommend the radioactive Roman art podcast. Well, at least the early episodes. It has been decaying at a steady rate since it was launched.