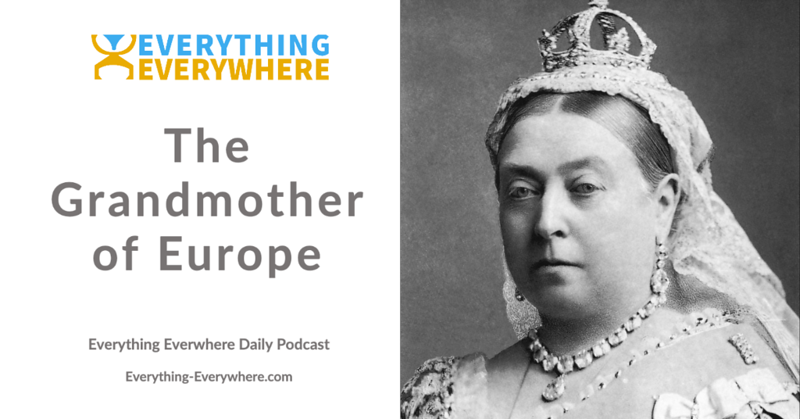 Traditionally, the royal families of Europe would arrange marriages amongst their children to establish alliances and bonds between their houses.

While this really isn’t done that much anymore, it also wasn’t that long ago that it was done. One monarch, in particular, Queen Victoria, was really good and marrying off her children. So good in fact that almost every royal house in Europe can trace their ancestry back to her.

Learn more about how Queen Victoria became known as the Grandmother of Europe on this episode of Everything Everywhere Daily.

Queen Victoria’s reign of 63 years and seven months was the second-longest in British history after the current Queen Elizabeth II.

She and her husband, Prince Albert of Saxe-Coburg and Gotha had nine children. The fact that she had nine children is surprising given that after her first child, also named Victoria, she mentioned how much she didn’t like being pregnant and claimed that newborn babies were ugly.

Nonetheless, her children and grandchildren went on to populate royal houses all over Europe.  In fact, of the 10 hereditary monarchies in Europe, 5 of the monarchs are direct descendants of Queen Victoria, and monarchs from another 5 disbanded monarchies were also descended.

So let’s look at just how Queen Victoria earned the title of Grandmother of Europe.

The first obvious place to look would be the United Kingdom.

Obviously, every monarch since Queen Victoria has been a direct descendant. The current monarch, Queen Elizabeth II, is the great-great-granddaughter of Victoria. All the monarchs in between were descended as well: George VI, Edward VIII, George V, and Edward VII.

Not only is Elizabeth II a descendent, but so is her husband Prince Philip who is Victoria’s great-great-grandson. That makes Elizabeth and Philip third cousins. If that sounds odd, realize that most people have no clue who their third cousins are and wouldn’t know it if they met them.

The next closest royal relatives would be the royal family of Norway.

The current king of Norway, Harald V, is likewise a great-great-grandson of Victoria. His father, King Olav V, was also related to Victoria by his mother, Maud of Wales who was the daughter of Edward VII. This makes King Harald a second cousin to Queen Elizabeth.

It should be noted that King Harald is the first non-British citizen in line for the British throne. He is currently 80th on the list of British succession.

Over in Denmark, Queen Margrethe II is also a great-great-granddaughter of Victoria. Her relation comes via her mother and grandmother who were in the Swedish Royal family and Victoria’s son Arthur who is her great-grandfather.

Speaking of Sweden, Margrethe’s first cousin is King Carl XVI Gustaf. Carl is also a great-great-grandson of Victoria via his father and grandmother. It should be noted that Carl’s father was not the king of Sweden as he passed away at a young age.

King Felipe is also related to Victoria on both his father’s and mother’s side.

So far, that makes 11 monarchs from existing royal houses who have been descended from Queen Victora: 5 British, 2 Norwegian, 2 Spanish, 1 Swedish, and 1 Danish.

However, there were several royal houses who’s countries got rid of their monarchies, and many of them had linkages to Queen Victoria as well.

In Germany, Kaiser Wilhelm II was the grandson of Victoria via her eldest daughter Victoria. In fact, the German royal house was quite close to the British Royal house at the start of WWI as both kings were first cousins with each other. It was one reason why people thought a great war between the two countries wouldn’t happen. The German monarchy was disbanded after WWI.

Over in Greece, King Paul, who reigned from 1947 to 1964 was Victoria’s great-grandson, and his son, Constantine II, was the last king of Greece. This is branch is how Prince Philip is related to Victoria. The Greek royal house was disbanded in 1973.

In Romania, the monarchy was abolished after WWII in 1947. The last Romanian King, Michael I, was a great-great-grandson and was related to Victoria via his father King Carol II. King Michael passed away in 2017 at the age of 96.

Yugoslavia also had a royal family and, you guessed it, it was also descended from Queen Victoria. The last Yugoslav monarch, King Peter II, was first cousins with Michael I of Romania and was another great-great-grandson.

Special note should be made of the Russian Royal Family. The last Russian Tsar Nicholas II was not a descendant of Victoria, but his wife was. Had the entire family not been murdered by the Soviets, Prince Alexei would have been another monarch descended from Victoria.

So, at this point in history, we have 17 people who have reigned as a monarch with 5 current royal houses which should continue the line monarchs who are descended from Victoria.

Now, you have to ask what royal families aren’t descended from Victoria. The answer is five: Liechtenstein, Belgium, Netherlands, Luxembourg, and Monaco.

Belgium and Luxembourg both have royal families which are closely related to Victoria. They are both descended from King Leopold I of Belgium, who was the uncle of Victoria and her husband Albert.

With all this interbreeding going on, you might be wondering how far we have to go to tie all these families together.  How can we tie the Netherlands and Monaco into this giant European royal family tree?

The answer is only a few generations further back from Victoria. King George II of England is the ancestor of the royal houses of Britain, Norway, Sweden, Denmark, Luxembourg, the Netherlands, Belgium, Spain, and Monaco.

Intermarriage amongst royal houses seems to be a thing of the past. Most modern royals tend to marry who they want, and those usually tend to be the very rich, very famous, or very attractive. Nonetheless, even if there is never another marriage between European royal houses, Queen Victoria will still be the Grandmother of Europe.