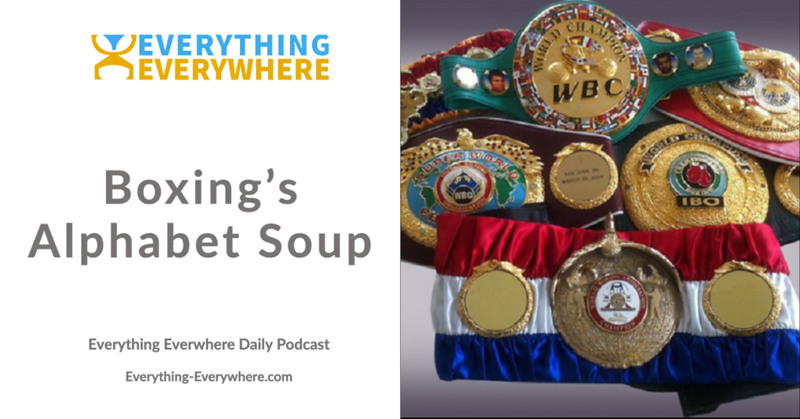 Boxing used to be one of the most popular sports in the world. A world championship bout would draw millions of people to their radios or televisions and could pack the largest stadiums.

Since then, it has waned in popularity in no small part due to the confusing array of titles and organizations which now exist. The WBA, WBC, IBF, WBO, IBO, WBF, and IBA and many other organizations all with their own set of initials, all hand out titles.

Find out how boxing got so confusing and created an alphabet soup of organizations on this episode of Everything Everywhere Daily.

The tradition of giving boxers a belt started in 1810 when King George III of Great Britain gave a jewel encrusted belt to bare-knuckle fighter Tom Cribb when he defeated American Tom Molineaux for the World Championship.

The idea of a world champion at that time was a very nebulous concept. There were no organizations which declared champions, no weight classes, no rules or even round limits.

There were eventually a set of rules developed in 1838 called London Prize Ring Rules, which created a set of ground rules for what we now call bare-knuckle boxing. These were superseded in 1867 by what is known as the Marquess of Queensbury Rules which required the use of boxing gloves, and are the basis of the sport today.

In the late 19th and early 20th century, bare-knuckle prize fighting was actually illegal in every state in the US. The center of the boxing world was a magazine called National Police Gazette, a very early pop culture men’s magazine.

The National Police Gazette was the closest thing to a sanctioning body at the time and current lineal champions can trace their roots all the way back to John L. Sullivan, who the magazine declared champion in 1885.

In an attempt to counter the New York State Athletic Commission, 13 different states joined forces to create the National Boxing Association, or the NBA.

Both the National Boxing Association and the  New York State Athletic Commission both crowned champions, and often crowned different boxers as champions in the same weight class.

I should also note, because I’ll be coming back to this, that as of 1929 there were 12 different weight classes.

The problem with the National Boxing Association was that many of their fights were international in scope. Likewise, there were also regional boxing bodies in Europe and Britain, all of which claimed some sort of global authority, that none of them really had.

To rectify this problem, the NBA changed its name to the World Boxing Association in 1962, and set up offices in the nation of Panama.

In 1963, a competing organization was set up in Mexico City called the World Boxing Council, and this group had the support of the  New York State Athletic Commission.

This two organization system was in place from 1963 through the early 1980s.

This was the system in place during boxing’s golden era with the likes of Mohammed Ali, George Foreman, and George Frazier.  Many champions held both titles concurrently and it was very common for both titles to be defended at the same time.

Things really began to get confusing in the 1980s. In 1983 the WBA held their annual convention in Puerto Rico and a man named Bobby Lee, who was the head of the United States Boxing Association, lost in his bid to become WBA president to Gilberto Mendoza.

Lee and several others left the WBA after the conference and created their own international boxing group. They renamed the United States Boxing Association the International Boxing Federation, and thus a third sanctioning body was born.

Five years later, again at the WBA annual convention in Venezuela, a group from Puerto Rico and the Dominican Republic walked out of the event due to a disagreement about the rules and created the World Boxing Organization, or WBO. This now put the number of sanctioning bodies at four.

These four organizations, the WBA, WBC, IBF, and WBO, are considered the four major title granting organizations in the world today. All four bodies recognize each other for standings and unification rules.

Before I mentioned that there were 12 weight classes back in 1929. Today there are 17 in men’s boxing, and I should also add there is now women’s boxing as well, which has 16 different weight classes.

Some of the organizations, in particular the WBA, began recognizing multiple champions in the same weight class. They created a thing called a “Super Champion”, who is someone who also holds a championship in a different organization. But the creation of the ‘super champion” then opened up someone else becoming the “regular champion”. You’d think if there was a super champion, there would be no need for a regular champion, but that isn’t the case.

To make it even worse, they will sometimes recognize an interim champion if someone doesn’t defend the title in a timely fashion. You’d think the interim champion would disappear once a regular champion was determined, but that isn’t the case.

Moreover, they created a thing called a “Gold Champion”, which no one is really even sure what it means or the rules behind it.

The WBC, not wanting to be left out, has also created Silver Champions, a Diamond Champion, an Eternal Champion, and Franchise Champions.

It has been estimated that if you added up all the belts across all divisions, for every international, national, and regional governing body in boxing around the world, there are over 6,000 championships.

To solve the problem of so many champions there have been several attempts to circumvent the sanctioning bodies.

The most notable would be The Ring Magazine, which often declares their own champion based on the performance of boxers. They don’t sanction fights, but they will make pronouncements on who they think is the best.

Websites like BoxRec have also popped up which try to do a computerized ranking for boxers, which is independent of any particular organization.

So, why does this situation persist? Wouldn’t it be better for the sport if they were to consolidate and merge these governing bodies?

Also, the more titles that are out there, the more boxers can hold titles.

Moreover, because boxing has such a long history, the sport evolved organically and it has a lot of legacy institutional issues.  The companies that promote the matches are totally different from the sanctioning bodies.

In a sport like mixed martial arts, a company like UFC is both the promoter and the sanctioning organization. You might have different companies like Bellator, but they exist in their own different universes.

So cleaning up all the acronyms in boxing would probably be good for the sport, and good for the fans, but it wouldn’t be good for the people who are currently making money, so the alphabet soup which is the sweet science will probably continue.