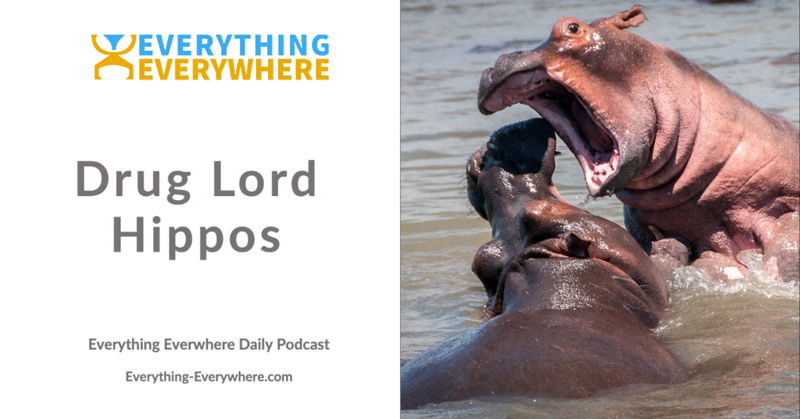 Pablo Escobar was the biggest drug lord the world has ever known. At his height, he had a monopoly on cocaine trade in the 1980s in the United States. He had a peak net worth of $60 billion in today’s inflation-adjusted dollars. He was personally responsible for thousands of murders and dozens of acts of terrorism in Colombia.

Today in Colombia, there are approximately 80 wild hippopotamuses roaming wild.

What do these two things have to do with each other? Well, everything.

Learn more about the cocaine hippopotamuses on this episode of Everything Everywhere Daily.

Pablo Escobar is the most well known and notorious drug lord and narcoterrorist in the world, even though he has been dead for almost 30 years.

His organization, the Medellín Cartel, was founded and led by him and at its peak he became the wealthiest criminal in world history. His empire was built on a foundation of violence and bloodshed.

He was responsible for a 1989 truck bombing in Bogotá which killed 63 people and injured over a thousand. He was behind the bombing on Avianca Flight 203 which killed 110 people.

It is estimated that during this reign of terror he was responsible for the deaths of over 4,000 people, including 200 judges, 1,000 police, and numerous journalists, government officials, and innocent bystanders.

At its peak, the Medellin Cartel was responsible for over 80% of the cocaine smuggled into the United States.

He was so wealthy, that once when he and his family were in hiding, his daughter got sick and to keep her warm he literally burned $2 million in cash.

In 1991, he surrendered to authorities under the condition that he could build his own prison, built to his specifications, and hire his own guards who were loyal to him. It wasn’t a prison so much as a fortress to protect him from his enemies.

As darkly fascinating a character as Pablo Escobar is, this episode really isn’t about him.

This episode is about the private zoo he created on his 3,600 acre estate called Hacienda Nápoles.

On his sprawling property he had, as all megalomaniacal leaders do, a collection of animals. Not just any animals, but animals which were brought in from all over the world. In his zoo were rhinoceroses, giraffes, zebras, ostriches, and four hippopotamuses.

After Escobar’s death in 1993, all of the animals were moved or sold to other zoos or parks…..except for the hippos. The hippos were considered too large and difficult to move, so they were left in place and forgotten.

The hippos, however, got along quite nicely in this tropical and wet part of Colombia. In fact, the four original hippos are now, twenty seven years later, 100 hippos.  Some experts estimate that within 10 to 20 years, there could be thousands of them.

These hundred hippos have become the center of a huge controversy.

In the vast majority of cases, invasive species are usually a bad thing. They did not evolve in the environment, so predator/prey balances do not exist. In the specific case of the hippos, they feed in the evenings on land, and then during the day they go into the water to cool off and defecate, bringing nutrients into the water.

This can cause algae blooms which can kill off other species in the water by preventing the availability of oxygen and other nutrients.

There is also the danger which the hippos themselves possess. In Africa, hippos are responsible for more deaths every year than any other animal. So far, no one has been harmed or killed by the hippos in Colombia, but the risk is there and will increase as the population rises.

However, there is another side to the story. Ecologists are not universal in their condemnation of the hippos, and neither are the people of the region who live with them.

For starters, the hippos have become a popular tourist attraction, which brings in much needed money. Just being hippos themselves is enough to bring in people, but having a lineage which extends to Pablo Escobar makes them extra special.

The ecological argument is much more complex than it might first appear. In a project funded by the National Geographic Society, researches compared Colombian lakes with hippos vs. lakes without hippos. The study was comprehensive, looking at the total diversity around the lakes down to the microbes found in the lake water.

The researchers found that there were subtle differences between the lakes, but the differences weren’t major.

One of the major arguments in favor of the hippos comes from the concept of rewilding. The idea stems from the fact that about 11,000 years ago, large herbivores were much more common in the area. They were removed from the ecosystem when humans migrated there and hunted them to extinction.

Most of the assumptions which are made about the ecosystem assume that the way it is now is the way it is supposed to be. There was a creature known as a notoungulate which was a large semi-aquatic herbivore which lived in the region. The hippos today are filling a very similar role in the ecosystem to what the notoungulates would have held.

There have been several cases around the world where the reintroduction of large herbivores have had positive effects on grasslands.

Several researchers think that the accidental introduction of hippos to Colombia might actually be a good thing in that the hippos are filling an ecological niche which has been missing for thousands of years.

There doesn’t appear to be any immediate need to take action. Whatever impact the hippos have at this point seems to be minor either way, and because hippos are so large, and their numbers are so small, they will be easy to find should the decision ever be made to remove them.

Until then, if you live in the Western Hemisphere, your best opportunity to see hippos in the wild will be to head to Puerto Triunfo, Colombia to view the animals which were brought there by the world’s biggest Drug Lord.