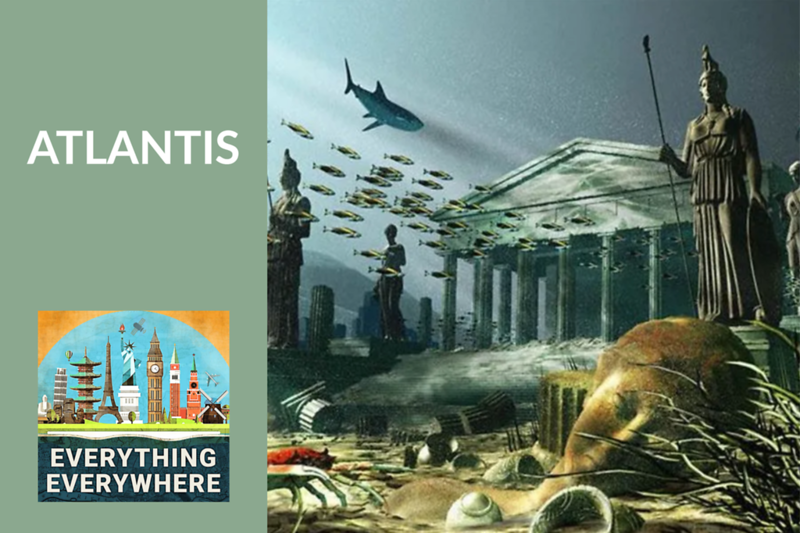 In the Dialogues written by Plato in the year 360 BC, he wrote of a place called Atlantis. Atlantis was a land where the citizens were half-gods and half-men, yet it was destroyed in a cataclysmic event.

Ever since then people have been speculating about where Atlantis was and who the Atlantians were.

Learn more about the history of Atlantis and the various theories of where it was and if it even existed, on this episode of Everything Everywhere Daily.

The amazing thing about the story of Atlantis is how much attention it has been given over the centuries versus how little evidence there ever was for it to begin with.

The only mentions we have of something called Atlantis come from the writing of Plato. That’s it.

There are no relics, inscriptions, or even mentions from other people in history. Moreover, it isn’t even given a central place in the works of Plato.

Atlantis appears in two of Plato’s dialogues: the Timaeus and the Critias.

According to Plato, what he knows of Atlantis comes from the Athenian statesman Solon, who visited Egypt 200 years before Plato and translated their writings about Atlantis.

So, right off the bat, whatever Plato tells us is 200-year-old hearsay.

So what does he tell us about Atlantis?

Atlantis was located beyond the Pillars of Hercules, which today is known as the strait of Gibraltar.

Atlantis was larger than Ancient Libya and Asia Minor combined. That would be most of North Africa west of the Nile and most of modern-day Turkey.

The city of Atlantis was supposedly three circular canals with circular islands in between them. It would have been something like what modern-day Amsterdam is like. There was also a long canal from the city to the sea which allowed the Atlanteans to have a powerful navy.

The people there were half-gods, and the land of Atlantis was given to the Greek god Poseidon.

They engaged in a war with people east of the Pillars of Hercules, which included the Egyptians, and then the land was destroyed in one cataclysmic day and the city sank.

Also, all of this took place 9,000 years before Plato.

So, the big question, and the one people have been asking for over 2,000 years, is if Atlantis was real, and if so where was it?

The same held true in Rome, amongst Jewish and Christian scholars, and even to the modern-day.

Moreover, of those who thought that Atlantis was real, the number of locations identified as the location of Atlantis is almost as large as the number of places.

So, where are the places which Atlantis has been claimed to have been?

If you take the writings of Plato literally, it would imply that there was a continent-sized landmass west of the Strait of Gibraltar that disappeared.

This was the most common theory up until recent times. Somewhere in the middle of the Atlantic Ocean was a sunken land where Atlantis resided.

The problem with this theory is manyfold. For starters, continents don’t work that way. They don’t just sink. If you remember back to my episode on plate tectonics continents can move around very slowly over geologic time. However, they don’t just sink, and certainly wouldn’t do so in a single day.

Moreover, we’ve done a pretty good job of mapping the bottom of the ocean, and there is nothing there that would indicate any sunken land.

Now you might be thinking that there is a continental-sized landmass west of the Pillars of Hercules: the Americas.

This became a popular theory after the European discovery of the Americans in the late 15the century.

One particular theory was that the Mayan people were the descendants of the Atlanteans. They had an elaborate calendar and had created advanced architecture. These pyramids, along with similar Aztec structures, were initially considered by some people to be the ruins of ancient Atlantis.

The problem with this theory is that it doesn’t really fit any other part of the legend. There is no evidence of a city that fits the descriptions, and there isn’t anything about it that involves cataclysmic destruction.

Another theory holds that Atlantis might have been in the modern-day Bahamas. This mainly comes from an underwater rock formation called the Bimini Road. This formation bears a rough resemblance to a road paved with large stones.

These stones which look like a road are about as good as the evidence gets, and the vast majority of geologists recognize it as a natural formation.

Likewise, many islands in the Caribbean have been posited as the location of Atlantis, including Hispanola and Puerto Rico.

In 1974, one writer named Flavio Barbiero named Antarctica as the location of Atlantis. The theory being that in the past it was much warmer and the evidence of the civilization was eventually covered in ice.

The last theory which still puts Atlantis in the Atlantic would be the Azore Islands. They are in the Atlantic, and they are volcanic, but they aren’t anywhere close to the size of a continent. Likewise, the Canary Islands and Cape Verde have also been named as possible locations.

Maybe, however, we shouldn’t take Plato’s text so literally. Maybe it is west of the Pillars of Hercules, but it isn’t that far away, or it isn’t that large.

One theory holds that Atlantis was the island of Great Britain, or possibly the island of Ireland. It could possibly have been located in an area that was dry land 11,000 years ago but was subsequently submerged when sea levels rose after the last ice age ended.

Another theory places it in northwest Africa. There is one place in particular that fits one of the descriptions better than any other. It is called the Richat Structure in the country of Mauritania. It is a formation that is a series of concentric circles which matches the description of the city given by Plato.

However, it is over 300 miles from the sea today, and it would have been even farther away 11,000 years ago. There is also no evidence of a canal, which would have been necessary if it somehow was a great naval power.

OK, maybe Atlantis wasn’t a physical place as described by Plato, but maybe it was inspired by an actual location. Maybe something close to home which the Greeks would have been more familiar with.

Within the Mediterranean, Malta, Cyprus, Crete, and Sardinia have all been named as possible locations for Atlantis.

One of the most interesting theories has to do with the island of Santorini. If you think of Santorini today, it is of picturesque images of white buildings against the sea. However, if you look at a map, you’ll see that Santorini sits on the edge of a crescent-shaped island which is part of a volcanic caldera.

The volcano located there exploded in a massive eruption 3600 years ago, which destroyed the ancient Minoan Civilization. The original island would have been round, like Atlantis, and it was destroyed in a day. Moreover, it would have been well known to anyone in ancient Greece.

The Atlantis legend might have been a way of preserving the story of the people who lived on ancient Santorini.

The Atlantis story has been adapted into popular fiction. It has been used as a backdrop for TV shows such as Stargate Atlantis, and it is also the location of the water-breathing, fish-talking Atlanteans of Aquaman.

Personally, I think Atlantis was just a metaphor used by Plato as there is nothing beyond Plato’s words, which he admits aren’t even his.  There has never been anything found which fits the description of Atlantis, and Plato even talks about Atlantis being involved with the Greek Gods.

There is however one thing about the Atlantis story which I do find interesting. The date and the story of a cataclysm.

9,000 years before Plato is shockingly close to the end of the period known as the Younger Dryas. One of the things which happened at this time was a massive rise in sea levels. I’m going to do a future episode on this because the implications are fascinating, but that rise in sea levels coincides with stories of great floods from sources such as the Bible and the Epic of Gilgamesh.

Maybe, some of the facts surrounding the Atlantis myth are just embellishments that have been added on over the years to something which has a kernel of truth.

….or maybe it is just a figment of the mind of Plato, and the reason why we’ve never found anything is that it never existed.