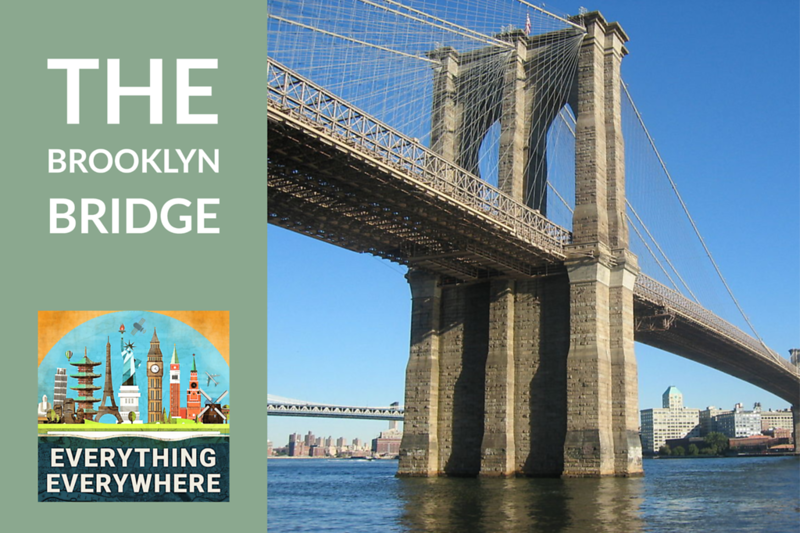 Brooklyn wasn’t always a part of New York City. It used to be a separate city located across the East River from New York, which at the time was only on the island of Manhattan.

For decades, people talked about a bridge to connect New York and the growing city of Brooklyn to facilitate travel and commerce.

In 1883, that bridge finally opened, and it was one of the greatest engineering achievements of the 19th century.

Learn more about the Brooklyn Bridge and how it was built, on this episode of Everything Everywhere Daily.

My audiobook recommendation today is The Great Bridge: The Epic Story of the Building of the Brooklyn Bridge by David McCullough.

So daring a concept as spanning the East River to join two great cities required vision and dedication of the kind that went into building Europe’s great cathedrals. During 14 years of construction, the odds against success seemed overwhelming. Thousands of people were put to work. Bodies were crushed and broken, lives lost, notorious political empires fell, and surges of public doubt constantly threatened the project.

But the story of the building of the Brooklyn Bridge is not just the saga of an engineering miracle; it is a sweeping narrative of the social climate of the time, replete with heroes and rascals who helped either to construct or to exploit the great enterprise.

The Great Bridge is also the story of a remarkable family, the Roeblings, who conceived and executed the audacious engineering plan at great personal cost. Without John Roebling’s vision, his son Washington’s skill and courage, and Washington’s wife Emily’s dedication, the bridge we know and cherish would never have been built.

The idea of a bridge connecting lower Manhattan and Brooklyn went back at least until the year 1800.  In 1800, however, Brooklyn was little more than a town without 6,000 people.

However, in the 19th century, Brooklyn grew rapidly. By 1850 the population had reached 100,000, and the population doubled each of the next two decades.

The bridge which would eventually be built was conceived in 1852 by German immigrant John Augustus Roebling. Roebling was a noted architect who had previously built several other suspension bridges, most famously, the Roebling Bridge in Cincinnati, Ohio, which at the time it was opened in 1866 was the longest suspension bridge in the world.

In 1867, the State of New York approved funding for a suspension bridge from New York to Brooklyn and a corporate was created that same year, naming Roebling as the chief architect of the project. Approval of the bridge within the city was lead by Tammany Hall political machine leader Boss Tweed, who liberally bribed city officials to get it approved.

The bridge, as Roebling envisioned it, would be the longest and tallest suspension bridge in the world. Moreover, the bridge would use steel cables. Almost everything at the time was made out of iron. Steel was stronger than iron, and Roebling felt it was the building material of the future.

Unfortunately, John Roebling had an accident in 1869. His foot was crushed by a ferry colliding into a dock, and he had to have his toes amputated. He then developed an infection and died a month later.

The chief engineer duties were then passed to his son, Washington Roebling.

Construction began in 1870, and the first order of business was the construction of the two caissons.

A caisson is basically an inverted box with an opening at the bottom. The caissons were massive wooden, air-tight structures that were sunk where the towers would be located. The bottom opening of the caisson would be on the bottom of the river and there were chambers that allowed workers to enter the caisson to excavate the soft mud on the river bottom.

They had to dig down to a firm substrate under the river to start building a base for the towers.

Work in the caissons was miserable and it was the most famous part of the construction of the bridge.

The air pressure inside the caissons was the same as the water outside, and there was no light. Workers would have to dig and break up large boulders to continue to make the caisson sink lower.

It was miserable work. It was dark and hot, you had to work by candlelight, and air circulation was poor. An estimated 265 men each day worked in the caissons for an entire year.

What soon became obvious was that the men working in caissons, known as sandhogs, were getting ill, and in some cases even dying. It became known as “caisson disease” or “decompression sickness”. Today we know it as the bends.  This is actually the biggest risk associated with SCUBA diving today.

What was happening was that when they depressurized from the high atmospheric pressure inside the caisson, the dissolved nitrogen in their blood and muscles was literally turning into bubbles, the same as what happens when you open a soft drink.

Washington Roebling would regularly go into the caissons himself for inspections and became paralyzed after suffering from decompression sickness. He was no longer able to oversee the construction of the bridge in person and had to observe it through a telescope from a room he had near the foot of the bridge.

The day-to-day duties of the lead engineer were given to his wife, Emily Roebling. She would pass along notes from her husband to the engineers on sight, and was well versed in mathematics and engineering herself, and she held this post for the next 11 years until the bridge was completed.

Once the caissons had reached their desired depth, they were filled with brick and concrete and they became the foundations for the towers of the bridge.

The towers are each 278 feet or 85 meters tall. They are made out of granite, limestone, and cement. The towers were the most time-consuming part of the project, having taken four years to build after the caissons were finished.

The towers are built with a neo-gothic arch, but the original design by John Roebling was to have the towers look like Egyptian tombs.

On either end of the bridge are anchorages where the cables are anchored down. They are massive structures that serve the function of an anchor as the name would suggest. There are also some enormous vaults inside the anchorages. These vaults are cool and damp and were used for decades as a storage area for wine. In the year 1900, storage on the Manhattan side sold for $5,000 per year and $500 per year on the Brooklyn side.

The vaults were later used as a bomb shelter and today they just store equipment. There is a time capsule on the Brooklyn side that was put in place on the 100th anniversary in 1983 with instructions that it not be opened until 2083.

The site of the Manhattan anchorage was previously the location of George Washington’s home when the United States capital was located in New York.

The cables, as I mentioned before were steel, galvanized steel to be precise, which was a first for suspension bridges. There are four main cables, two on the inside near the median of the road and two on the outer edges of the road.

Each main cable is 15.75 inches or 40.0 centimeters in diameter. They are bundles of 19 strands with each strand consisting of 273 wires, for a total of 5,282 wires per cable. This was the first bridge to use this bundled wire technique for the main cables.

The bridge finally opened on May 24, 1883, after 13 years of construction. The first person to officially cross the bridge was Emily Roebling. The mayors of New York and Brooklyn cross to shake hands in the middle. In the first 24 hours the bridge was open, over 150,000 people walked across.

The bridge was considered an engineering wonder of the era alongside the Suez Canal, the transcontinental railroad, and the transatlantic cable.

Despite over a million people crossing the bridge in its first year, there were still doubts by some people about the structural integrity of the bridge. To put those doubts to rest, in 1884 on the first anniversary of the bridge’s opening, PT Barnum lead a parade of 21 elephants across the bridge.

One of the bridge’s biggest contributions to American culture is the phrase “selling the Brooklyn Bridge”. This actually comes from a real thing. There was a con man named George C. Parker in the early 20th century who actually sold the bridge many times, usually to new immigrants to the city.

What he was actually selling was the rights to talk tolls on the bridge. On several occasions, the police were called to take down toll booths people set up after buying the bridge.

The Brooklyn Bridge’s title as the world’s longest suspension bridge only lasted 20 years. Its title was taken in 1903 by the Williamsburg Bridge which was just up the river.

The Brooklyn Bridge isn’t the biggest or best bridge in the world anymore, but it still holds the distinction of being the first truly modern bridge. A 2003 BBC documentary series listed it as one of the Seven Wonders of the Industrial World. Today, the bridge is on the tentative list to become a UNESCO World Heritage Site.

Its history and innovative engineering techniques make it one of the most significant bridges in the world, and if you don’t believe that then I have a bridge I’d like to sell you.