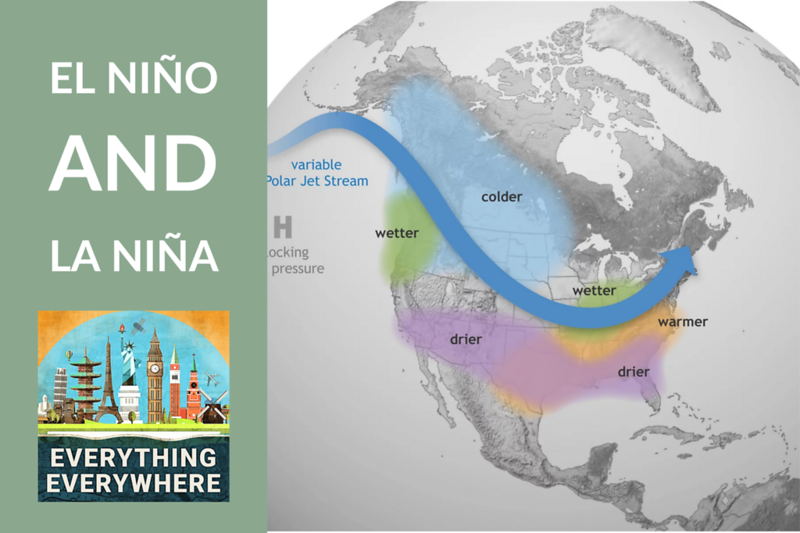 Weather systems on Earth aren’t stable. There are cycles that weather patterns go through which can have enormous effects around the globe.

There is probably no more important weather cycle than the one meteorologists called the Southern Oscillation. This cycle can have dramatic implications for temperatures and rainfall all over the world.

Learn more about El Niño, La Niña, and the Southern Oscillation on this episode of Everything Everywhere Daily.

This episode is brought to you by Scottevest.

If you are interested in getting some Scottevest gear, or even if you already have purchased something, you should head to Scottevest.com to signup for their loyalty program.

You can earn pocket points with every purchase you make, as well as earning points through just signing up for the program, following them on social media, and every anniversary you are in the program.

You can then use those points for discounts on future Scottevest products.

If you are interested in getting some of the best jackets, shirts, and pants for carrying your gear, head to scottevest.com.

You can start saving money right away by using coupon code “EverythingEverywhere”, all one word, at checkout and save 15% on your next order.

Once again, go to scottevest.com and use coupon code EverythingEverywhere, all one word, to save 15% on your next purchase.

The El Nino phenomenon was originally named by Peruvian fishermen back in the 17th century. They noticed that the waters would often get warmer around Christmas time. They named this effect El Nino which means little boy in Spanish. When capitalized, El Nino refers to the Christ child and it gets the name from Christmas.

In the 1930s a meteorologist named Sir Gilbert Walker realized that a meteorological phenomenon called the Southern Oscillation always occurred with what the locals called El Nino.

To understand what happens during an El Nino, it is necessary to understand the circulation of water in the Pacific Ocean.

This cold water begins to warm up as it reaches the surface and it is transported roughly along the equator towards Asia and Australia. Along the way, the heat of the sun in the Pacific warms this water and it is one of the reasons why the parts of Asia along the same latitude, such as Indonesia, are so hot.

This current will then take the warm water down the eastern coast of Australia, and down to the coast of Antarctica where it will work its way back to South America and start again.

This is how it normally works.

Ocean currents can change, however. Every few years, the transport of warm water from east to west can sometimes reverse. Warm water from the equator will move east towards South America. This is the warm-water phenomenon that the 17th-century fishermen found and named, and this is El Nino.

Because the Pacific is so big, this change in the warm water currents can change weather patterns globally.

The reason why the fishermen recognized and named this phenomenon is that it was horrible for fishing. The nutrients which came to the surface with the cold water were no longer coming up.

The areas which see the largest weather changes are in the Americas.

On the west coast of South America, they will see more rainfall with the moist hot air hitting its coast. Chile will tend to have a milder winter, and across the Andes into the Amazon basin, there will usually be less rain.

In Asia, El Nino will reduce precipitation and can cause droughts. The driest February in recorded history in Singapore, where weather records have been kept the longest, all coincide with El Nino’s.

There is a third phenomenon that can also happen in this region and it is known as an anti-El Nino, or as it is colloquially known, as a La Nina, which just means the little girl, signifying it is the opposite of an El Nino. It is also sometimes known as El Viejo or the old man.

During a La Nina event, the cold water from the west coast of South American gets pushed up further than normal. The result is usually the opposite of what happens during an El Nino event.

Precipitation on the coast of Peru and Chile is usually less, but rainfall in the Andes can be more.

In Asia, cyclones can be pushed further west, threatening mainland Asia. Likewise, there can be increased rainfall in Indonesia, the Philippines, and Malaysia.

While these events do occur every several years, they aren’t predictable. You can’t pencil in it on your calendar. There was a period of almost 20 years from the early 1920s to the early 1940s where there was no El Nino. This period coincided with the Dust Bowl.  They will usually appear between 2 and 7 years.

On the other hand, there have been cases of El Nino events happening within a year of each other.

Likewise, not every El Nino or La Nina event is the same. Some are stronger than others. The El Nino events of 1982-83 and 1997-98 were the strongest recorded. Others tend to be rather weak.

The coldest temperatures I’ve ever experience were in 1996 in Minnesota. Temperatures reach -40 in the Twin Cities where I was living, and that is so cold that it is the same temperature in both Fahrenheit and Celcius. The record low temperature for the state of Minnesota was set that year at -60 Farenheight.

Sure enough, when I checked, it was a La Nina winter.

As far as researchers can tell, these cycles of El Nino and La Nina have been going on for thousands of years. At least since the end of the last ice age.

Once the El Nino, La Nina cycles were figured out and we know what they did to the weather, it wasn’t too hard to go back and see just how they affected history.

A fishery collapse in 1972 off the coast of South America was due to an El Nino event. When fisheries collapse, it can result in fewer seabirds feeding, which can affect guano and fertilizer production.

El Nino events may have resulted in droughts and famines which caused the collapse of some Precolumbian cultures in Peru.

Cyclones and droughts in India may have been caused by El Nino and La Nina events.

A strong El Niño between 1789 and 1793 might have caused poor harvests in Europe, which was one of the sparks for the French Revolution.

In 1998 and 2015 low rainfall in Panama lead to reductions in the size of some ships which could go through the Panama Canal.

The 1876 famine in northern China killed up to 13 million people and was in part due to an El Nino event.

As I am recording this, weather services are reporting that for the second year in a row a La Nina event is forming. That will probably mean low temperatures this winter where I live, more rain in places like Seattle, and less rain in Arizona and southern California.

Depending on where in the world you live, the El Nino, La Nina cycles might be responsible for much of the weather you experience. The Earth has an interconnected web of weather and one of the biggest drivers of that weather all has to do with cold water currents off of the western coast of South America.