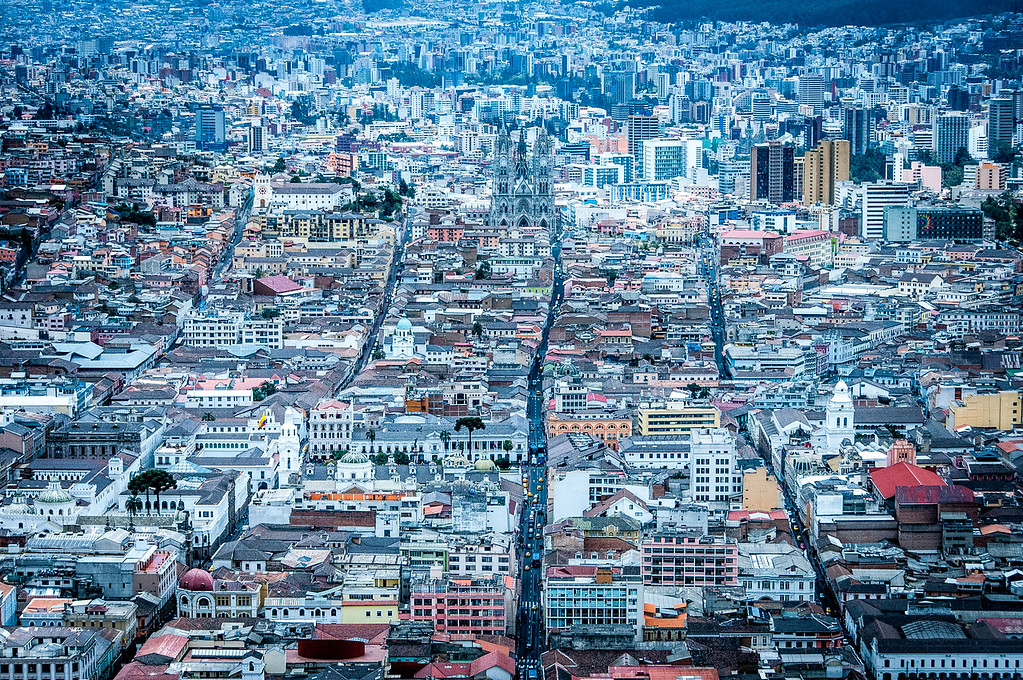 When I began traveling non-stop in 2007, it took me years to finally visit South America. There was no particular reason why it took me so long, I just never got around to it. However when I landed in Quito, Ecuador for my first trip to the Galapagos Islands, it marked the beginning of more exploration of Latin America over the coming years. Given that Ecuador has a lot to offer travel-lovers, I figured it was a good time for another installment of  8 Facts You Might Not Have Known, so buckle up as we look at eight interesting things about Ecuador that you probably didn’t know!

1. Ecuador is the closest country to space.

You might think the closest point on Earth to space would be Mount Everest, but you’d be wrong. The reason has to do with the fact that the Earth is not a perfect sphere. Because of its rotation, it bulges slightly at the equator. That means that—all things being—equal, the equator is closer to space and farther from the center of the Earth than anywhere else. The bulge is big enough that Mount Chimborazo in Ecuador is actually 1.5 miles “higher” than Mount Everest. Because mountain peaks are measured from sea level, Mount Everest is considered higher because the bulge in the Earth at the equator also means that the seas are higher, too.

2. Ecuador is the only country in the world named after a geographical feature.

The official name of Ecuador is República del Ecuador, which literally means “The Republic of the Equator.” The equator runs through the country and, in fact, there’s a large monument about 45 minutes away from Quito where you can stand in both the Northern and Southern Hemisphere.

At the first UNESCO World Heritage conference in 1978, 32 sites were in the inaugural list. Each World Heritage Site has a number and site #1 is the Galapagos Islands and #2 is the City of Quito.

4. Ecuador had a long-standing border conflict with Peru.

For decades, Peru and Ecuador clashed over where the border between the two countries was to be drawn. In 1941, fighting broke out and it was ended by the Rio Protocol. Fighting broke out again, however, in 1981 and 1995. Final demarcation of the border and end of the conflict occurred in 1999. One oddity of the agreement is that Ecuador has a perpetual lease of one square kilometer of Peru where they have a military base. It’s Peruvian territory but run by Ecuador. (Keen to learn more about Peru? Read interesting facts about Peru.)

5. Ecuador was once joined with Colombia and Venezuela.

From 1822 to 1830, Ecuador was part of the nation of Gran Colombia which included Colombia and Venezuela. After gaining independence from Spain, Ecuador joined Gran Colombia, but the project soon fell apart and Ecuador became a republic in 1830.

6. Charles Darwin developed his Theory of Coral Atolls in the Galapagos Islands.

I’m sure you’ve heard all about Darwin’s expedition on the HMS Beagle to the Galapagos, and how came up with the ideas that lead to the theory of evolution. What you might not know is that he also developed the modern day theory of coral atoll development in the Galapagos Islands. He realized that the easternmost islands were larger and higher, and the further west you went they became smaller until you eventually had atolls. Also, the active volcanoes were in the east and not in the west. This is the same thing you can see in has occurred in the Hawaiian islands.

7. That iconic Panama Hat you love is actually from Ecuador.

Panama hats are woven hats made from toquilla palm plants—plants notable for strong, durable fibers. The hats are made in Ecuador and originated from humble regions, despite their dashing imagine today. These famous woven hats were traditionally worn in Andean and coastal regions of Ecuador as far back as the mid-1600s, but as the sophisticated weaving practices gained acclaim in 18th Century. The Montecristi region began producing these straw-brimmed hats and shipping them to Panama on the way to the United States. The label on the boxes often had the shipping point for the products, which was Panama, and the rest is history.

Bonus Fact: The rise in popularity of this hat in the U.S. is attributed by many to the Gold Rush (1848–1855)—just as Montecristi was ramping up production of the hat and shipment to the U.S., Americans were moving en masse to California, where they would work in the baking heat of the Californian sun and, obviously, needed a quality hat to keep them cool and protected. The traditional Ecuadorian toquilla hat is so unique that it was added to the UNESCO Intangible Cultural Heritage Lists in 2012.

8. Rosalía Arteaga, the first female President of Ecuador, served for only two days.

In 1996, she was installed as Vice-President after the election of Abdalá Bucaram. On February 6, 1997, he was removed from office by Ecuador’s Congress. There was a dispute about who should assume the office of the Presidency. Congressional leader Fabián Alarcón was sworn in on February 6, but Arteaga insisted that as VP she should have been next in line—she was then sworn into office on February 9. On February 11, however, Alarcón was once again sworn into office with the support of Congress and the army and Arteaga resigned. She ran for President in 1998, but only received 3% of the vote.

Plan a Trip to Ecuador:

Ecuador Travel Guide: Our free guide covers everything you should know about booking travel to Ecuador—what you should do once you’re there, as well as where to stay, and more. And if you’re after a visual tour of the country, check out our Galapagos Photo Essay, as well as our review of the best tour of the Galapagos Islands.

Where to Stay in Quito, Ecuador: We’re partial to the Casa Hotel Baquedano on a mid-range budget, the Vista del Angel Hotel Boutique for a beautiful splurge, and Hotel + Arte offers a great ratio of amenities-to-price for those on a budget.

Navigate the Country: Your best bet is likely to use taxis and buses when you’re in Quito, and even if you’re heading to some of the main other towns. But if you speak Spanish and feel adventurous, rent a car and explore the country’s many delightful smaller towns (if you do that, you definitely want a NatGeo Ecuador Map). You should also use single and multi-day tours as a way to explore the country’s vast natural beauty.

Book Travel Insurance: Ecuador is generally safe enough if you take precautions, but Quito has some issues, and if you need private medical care you’ll be glad for travel insurance—we recommend coverage through World Nomads.

20 thoughts on “8 Interesting Facts About Ecuador”