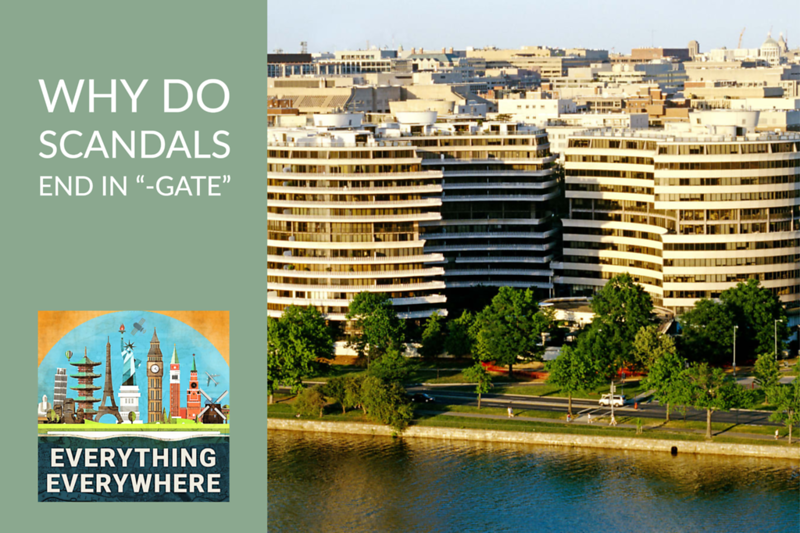 I’m sure all of you are familiar with Watergate. You also might be familiar with Gamergate, Contragate, Pizzagate, Partygate, Chinagate, Deflategate, Sandpapergate, and Winegate
There are dozens and dozens more of these scandals which have all been named with the suffix -gate.
But why do scandals get affixed with -gate in the English language, and where did the word originally come from?

Learn more about scandals ending in -gate, and why this suffix came to denote a scandal, on this episode of Everything Everywhere Daily.

The path which lead us to the use of the suffix -gate to denote scandals from the origin of the word watergate, is a very long and circuitous one.
Believe it or not, this story actually starts in 1831 with the opening of the Chesapeake & Ohio Canal. Canals were a really big deal in early America because the cost of transporting goods inland was ridiculously expensive.
The canal connected Cumberland, Maryland to the national capital in Washington DC.
The location which became known as “Watergate” is located not far from the eastern terminus of the Chesapeake & Ohio Canal, where it emptied into the Potomac River.
There are several stories about how the name watergate came about. Most of them have to do with the location of a nearby “waste weir”. A waste weir is a gate that is designed to regulate water in a canal. It could remove excess water in the event of flooding, or drain a canal if there was a need for repairs.
Basically, it was a gate, which held back water. Hence, a “water gate”.
The reason why this particular location was given the term “water gate” primarily dates back to a 19th-century inn near the site called The Water Gate Inn (two words).
There was also a restaurant that went by the name The Water Gate Inn which operated from ??1942 to 1966.
Yet another theory is that the word comes from the water steps, sometimes called the water gate, which leads from the nearby Lincoln Memorial down to the Potomac River.
Regardless of how the name came to be, the location became one of the most prime, undeveloped spots of real estate in Washington. It is located just 1 kilometer or a little over half a mile from the Lincoln Memorial and the National Mall, and it is right next door to the Kennedy Center for Performing Arts.
In 1960, an Italian firm purchased the 10 acres of land which was formerly owned by the Chesapeake & Ohio Canal for $60 million dollars.
The facility they designed was a large mixed-used complex with apartment buildings, office space, shops, and restaurants. It was pitched as a city within a city, and it would provide everything the residents needed.
The first of the 5 Watergate buildings was opened in 1963, and it quickly became one of the premier residential locations in Washington DC.  The residents who lived there reads like a who’s who of Washington elite from both sides of the aisle.
What is relevant to this story is that the Democratic National Committee had its offices on the 6th floor of the Watergate office building. The offices were broken into on June 17, 1972, by a group authorized by the President of the United States, Richard Nixon.

The details of the Watergate break-in and subsequent scandal surrounding it are beyond the scope of this episode. Suffice it to say, the scandal led to the only resignation of a US president, and the entire affair became known as Watergate, named after the office building where the burglary occurred.
Here I need to take a sidetrack from the geography and history of the term watergate to talk about linguistics.
There are certain words in English called blended words, or portmanteaus, which are created by just merging two other words together. A good example would be the word brunch, which simply is a combination of breakfast and lunch.
There is a category of portmanteaus called libfixes. A libfix is itself a portmanteau of the words “liberated” and “affix”.
A libfix is any sort of suffix or prefix which can make a new word.
For example, if I said I was hosting a podathon, you’d probably know what I was talking about, even if you never heard that word before. Pod, is clearly referencing podcasting.
The suffix -athon comes from the word marathon and it is used for all sorts of things including decathlon, walkathon, telethon, and Toyotathon. It means any extended
Likewise, -cation from vacation has glomed onto words like staycation, workcation, and schoolcation.
Even podcast is a libfix. The word cast comes from broadcast which is a method of throwing seeds, which was borrowed for use in radio and television programs, and then -cast, because used for any sort of audiovisual program. Webcasts, newscasts, podcasts, et cetera.
So, the use of -gate as a suffix to indicate a scandal is an example of a linguistic libfix.
How -gate went from the watergate scandal to general usage is an interesting story.
The first use of -gate as a suffix to indicate a scandal beyond Watergate occurred pretty quickly after the Watergate break-in became public.
In August of 1972, just 2 months after the break-in, according to the Oxford English Dictionary, National Lampoon used the -gate suffix in a non-Watergate reference. The sentence in question said, ‘There have been persistent rumors in Russia of a vast scandal.? Implicated in “the Volgagate” are a group of liberal officials.’
Just a few months later, the Saturday Review published the following, ‘Inevitably, the brouhaha of Bordeaux became known as Wine-gate.’
What really popularized the use of the -gate suffix was New York Times columnist William Safire.
Safire was a member of the Nixon administration, who Nixon later targeted with wiretaps.
He wrote a column for the New York Times about politics, but he also wrote another column for the Times called “On Language”, and he was widely considered to be one of the foremost public authorities on the English Language and grammar in the United States.
Even when he wasn’t writing about language, and he was writing about politics, he was still considered an authority on the language.
Once he started his column, he began to the -gate suffix frequently to describe various scandals and coined a whole host of -gates.
In 1974 he referred to Vietgate, which was the idea floated at the time of pardoning draft dodgers.
He coined Billygate, which was a scandal regarding the brother of President Jimmy Carter’s lobbying activities.
Contragate which was also known as the Iran Contra Affair, was the Reagan administration funneling money to the Nicaraguan Contras.
Iraqgate, which was the allegation that the George HW Bush administration helped build up the Iraqui military before the Iraq war.
Nannygate, which dealt with accusations that nannies hired by the Clintons didn’t pay social security taxes.
There were a whole bunch more including Koreagate, Debategate, Briefingsgate, and Doublebillingsgate.
Safire was hardly the only one using -gate to name scandals.
The video game industry had gamergate, Ariana Grande was caught licking a donut, which sparked donutgate.
Of course, there was also Deflategate when the hall of fame cheating quarterback Tom Brady was caught letting the air out of balls when it was cold to make them easier to catch.
The funny thing is, the use of the -gate suffix has caught on outside of the United States.
The Australia men’s cricket team was subject to Sandpapergate when one of the players was caught scuffing a ball during a match.
The UK has had partygate which dealt with having parties at 10 Downing Street during COVID lockdowns.
Canada even had fartgate, which was when one member of parliament accused another of being “unparliamentary” for using the word fart during a speech.
The really weird thing is that the gate suffix has even jumped into other languages.
The term has been used in Argentina, Germany, South Korea, Greece, Hungary, and even China.
In China, they’ve used the world -mén for scandals, which literally means “gate”.
So, the next time you hear something in the news which has -gate attacked to some scandal or controversy, just remember that it all comes from a 50-year-old political scandal named after an office building in Washington DC that got its name from a water control barrier in the Chesapeake & Ohio Canal.

Everything Everywhere Daily is an Airwave Media Podcast. The associate producers are Thor Thomsen and Peter Bennett. Today’s review comes from listener terinjokes over at PodcastRepublic. They write:By far my favorite podcast! It fits perfectly to my daily walk to a neighborhood cafe. The topics are varied and engaging, and I learn something new every day. Thanks Gary!
Thanks, terinjokes! Contrary to popular belief, the thing that goes best with coffee isn’t donuts, it is knowledge.
Remember, if you leave a review or send in a question, you too can have it read on the show.