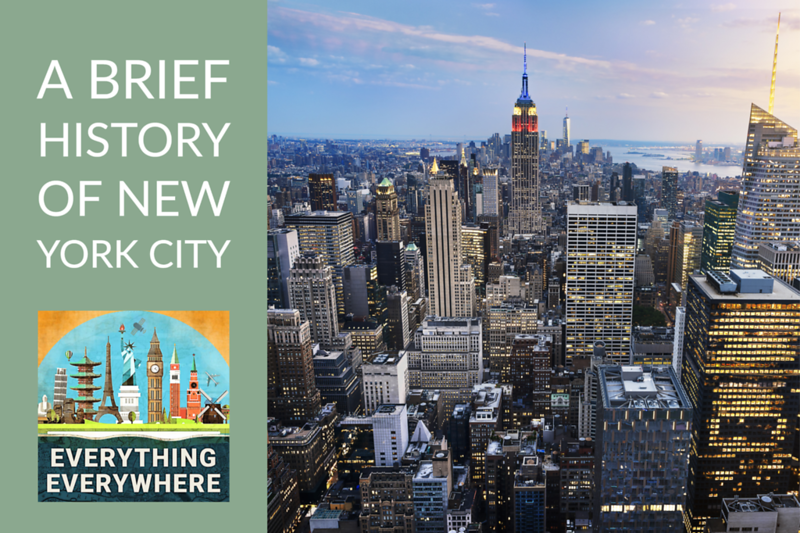 New York City has been called the city that never sleeps, the Big Apple, and the city so nice they named it twice.  It is the world center for finance, the location of the United Nations, and a center for fashion and entertainment.

But why did this city become so important, and why did such an important city get founded where it is? Was it chance, was it history, or was it geography?

Learn more about New York City as much as possible on a daily podcast, on this Episode of Everything Everywhere Daily.

In 1865, the New York and Brooklyn fire departments merged.
In 1874, the area known as the Bronx was annexed to New York City and it was simply known as the “Annexed District of The Bronx”.
Around this time, Brooklyn began to consolidate all of the communities which neighbor it as well.
The big change which created the modern city of New York happened in 1898. That was the year that Brooklyn, Manhattan, the communities of Staten Island, and Queens County all merged to form New York City.
The new city was set up with a system of boroughs, with each borough acting in some respects as an independent city. The Bronx separated once again in 1914 to create the fifth borough.
Likewise, the counties were rearranged such that each borough became its own county with relation to the State of New York.
New York had always been the primary entry port for immigrants coming to the United States. Begging in 1892 Ellis Island opened which became the primary immigration processing facility in the country. Through 1954, it processed over 12 million immigrants to the United States.
With the surge in immigration and the consolidation of the city, it grew even faster than before. By 1925 it had become the largest city in world history with a population of 7.7 million people.

Just 11 years later in 1936, it became the first city in history to have a population of 10 million people.
It also became the home to the world’s tallest buildings with the construction of the Chrysler, Empire State, and Woolworth Buildings.
New York had certainly become a major international city by this time. As the finance center of the United States, which now had the largest economy in the world, it had become a first-tier world city.
It was in the aftermath of the second world war that New York established a position of predominance.
In 1951, the United Nations established its headquarters in Manhattan at a location on the East River. It is the location of both the UN General Assembly and Security Council, as it also has embassies from every country in the world.
Likewise, the Bretton Woods system which established the post-war monetary framework made the US Dollar the world’s reserve currency, and the largest store of gold in the world was and is located in the basement of the New York Federal Reserve Bank.  When there are large transfers between countries, gold is moved from one pile to another.
It is also one of, if not the most, diverse cities in the world. An estimated 800 languages are spoken in the city, a third of all residents were born outside of the United States, and with the UN, there are people living in the city from every nation on Earth.
Today New York has two of the world’s largest museums, the world’s largest subway system, two of the world’s largest stock exchanges, two of the worst football teams in America, and three airports, none of which are connected to their subway system.