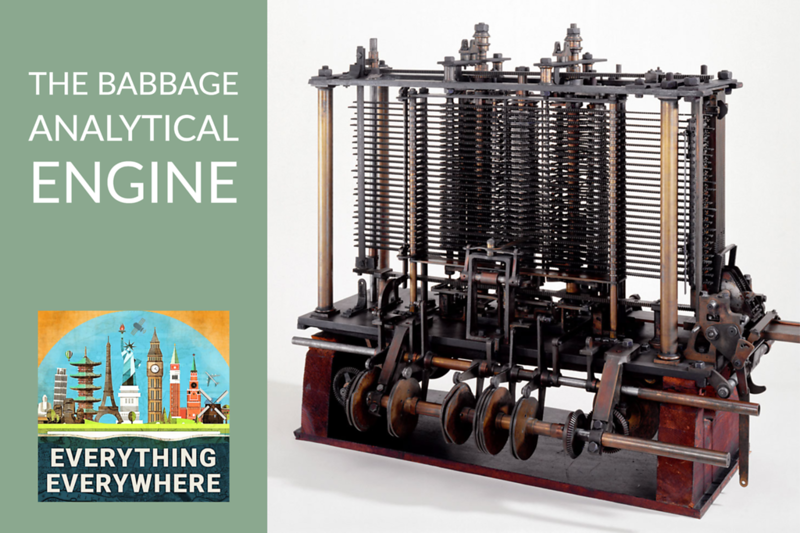 Computers have obviously transformed our world. You wouldn’t be listing to my voice right now if it wasn’t for computers.
However, the first computers, a device that could perform arbitrary calculations, actually came well before electronics. It was made of gears, cogs, and levers, and it was able to perform mathematical calculations as well as run simple programs.
Learn more about Charles Babbage and his analytical engine, the world’s first mechanical computer, on this episode of Everything Everywhere Daily.

You’ve probably heard the expression that necessity is the mother of invention. This too was the case with the creation of the world’s first computer.
I should note what I’m talking about when I say “computer”. In a previous episode, I talked about the Antikythera Mechanism which was an ancient geared device that was found in a shipwreck off the coast of Greece.
The Antikythera Mechanism was a type of computer insofar as it could predict astronomical events years in the future. However, it could only do one thing. It couldn’t be programmed and it couldn’t provide different outputs from different inputs.
The Antikythera Mechanism was a sophisticated mechanical device, but it was more akin to a clock than a computer.
Charles Babbage was a pretty smart guy. He was a mathematician, an engineer, a philosopher, and an inventor. Just to give you an idea, he held the Lucasian Chair of Mathematics at Cambridge which was also held by the likes of Isaac Newton and Stephen Hawking.
In 1811, he attended Cambridge and found that he knew more about mathematics than his professors did, and in 1812 he founded the Analytical Society. He became a member of the Royal Society in 1816 and was also a founder of the Royal Astronomical Society.
Astronomy at the time was highly dependent on tables for the locations of planets and stars. These tables were filled with values that were created by what were often very complicated calculations. If the calculations were off, even a little bit, it would render the tables and the astronomical observations, worthless.
Babbage had the idea of creating a device that would create flawless calculations.
This wasn’t just a theoretical or academic concern. Astronomical observations helped determine time and location, which was really important to a country that was heavily dependent on its navy.
In 1822 he finished a small prototype machine that could do simple calculations
With this experience, in 1823 he wrote a paper titled the “Theoretical Principles of Machinery for Calculating Tables”. This paper can be thought of as the beginning of the field of computer science.
After the success of his paper, he set about creating this device, what he called a Difference Engine.
He applied to the British Government for money and was given one of the world’s first government grants for technology, for £1700. With the money, he hired one of the best machinists in England, Joseph Clement.
The machine which was designed by Babbage had 25,000 parts.
The initial design of the engine could calculate 20 digit numbers and 6th order equations.
Nine years later, they had a device that could work with six-digit numbers and could solve 2nd order equations. They only had about 1/7 of the original design.
By this time, Babbage and Clement had blown through £17,000 pounds of the government’s money, and the project was halted.
The device they created wasn’t bad. Doing calculations out to six digits was about the limit of what most people calculated by hand.
Babbage still wanted to be able to calculate out to 20 digits.
He set about designing a second difference engine. This new machine would only have 8,000 parts.
Even though it had fewer parts, it was much more ambitious than the first difference engine. This device would be able to store previous results for later use. This would be the first computer memory.
The device was also designed to stamp out its results on a metal plate. The world’s first computer printer.
Unfortunately, Babbage’s second difference engine was never built during his lifetime. He ran out of money, and the truth was he was far more interested in designing these engines than building them.
The Science Museum of London actually built his second difference engine in 1991. It has all 8,000 parts and it is 11 feet long and weighs five tons.
The first calculation which was run on it was calculated out to 31 digits.
While Babbage was supposedly working on the second difference engine, he came up with a much better idea. A much more general computer.

The Difference Engines were basically an abacus on steroids. This new device could do much more including runing simple programs which included loops and conditional logic.
He called this device the Analytical Engine.
The Analytical Engine had four parts.

If any of this sounds familiar, it is because it has all of the basic components of a modern-day computer.  The mill is the CPU, the store is the memory, the reader is the keyboard, and the printer is the output.
The use of punch cards actually originated in something called a Jacquard loom. The cards were used to determine the type of weave the loom would create.
To give you an idea of how much more ambitious the Analytical Engine was, Babbage planned for the engine’s memory to house numbers are large as 1,050 digits.
Unlike the Difference Engines, the Analytical Engine would be steam power, and not turned by a crank.
Enter into the story Ada Lovelace.
Ada Lovelace was born Ada Byron, and she was the daughter of the poet Lord Byron.
She was an extremely talented mathematician. She was encouraged by her father to study mathematics which was discouraged for women at that time.
She met Babbage when she was only 17 and she proved a receptive audience to his ideas about his Difference Engines.
Years later she ended up translating one of Babagge’s papers into French, which greatly impressed Babbage.
She worked in collaboration with Babbage and her ideas actually went far beyond what even Babbage considered for what a computer could do. She thought the engine, ‘might act upon other things besides number… the Engine might compose elaborate and scientific pieces of music of any degree of complexity or extent’.
Ada Lovelace is often called the world’s first computer programmer, and she was widely responsible for publicizing and raising the profile of the Analytic Engine.
Sadly, Ada died at the young age of 36 in 1852.  She will be the subject of a future episode.
For the rest of his life, Charles Babbage kept working on his Analytic Engine. His problem was a lack of funding and expertise with machining parts….and the fact that he still was more interested in the theoretical than the practical.
He did eventually build a small part of the Analytical Engine, but that was all he ever managed.
He died in 1871 at the age of 79.
After his death, his son Henry advocated for the construction of the engine.
In 1878, the British Association for the Advancement of Science noted that the Engine was “a marvel of mechanical ingenuity” and that it would be an incredibly useful and valuable machine.
However, they recommended against building it because they honestly had no idea how much it would cost to build. Babbage’s attempt at building his first Difference Engine went massively over budget, and no one had ever built a machine like this before.
Henry Babbage worked on the machine intermittently from 1880 to 1910. He managed to build parts of the mill and from that, he could calculate multiples of pi.
As of my recording this episode, a fully working version of Babbage’s Analytic Engine has never been built. There was a crowdfunding effort towards building one in 2010, but nothing has been done. One of the problems is that Babbage’s plans for the machine are simply very difficult to decipher.
Even though the Analytic Engine has never been built, the work done by Charles Babbage has had a significant impact on the development of computers and computer science in the 20th century.
Vannevar Bush, who pioneered mechanical computers in the 1920s and 30s, explicitly acknowledged the work of Charles Babbage in his efforts.
The electronic computers which were eventually developed were based on models which were explicitly outlined in Babbage’s Analytic Engine.
The Analytic Engine has found a place in many steampunk works of fiction. In one story, Sherlock Holmes was actually a program that ran on the Engine which solved crimes.
There is of course no practical purpose for building an Analytic Engine today. The worst computer you can buy today would be trillions of times more powerful.
However, there is a part of me that would love to see it built. It would be great work of mechanical art, and a testament to the genius of Charles Babbage.

Everything Everywhere Daily is an Airwave Media Podcast. The associate producers are Thor Thomsen and Peter Bennett. I want to tell everyone about a new and fun way you can support the show. I finally have the final pieces set up and I am ready to unleash it on all of you.
It is called Value-4-Value and it is a way to support the show as well as to directly send me messages at the same time.
First, you need to be using a modern podcast app that supports Value4Value. You can find them at newpodcastapps.com, and from this episode on out, you will always be able to find that link in the show notes of every episode.
Podcast apps that support Value4Value include Fountain, Castamatic, and Breeze as well as others. They are available for both iOS and Android.
These apps will allow you to send micropayments in Bitcoin over the Lightning network. Fractional bitcoin, as small as 1/100,000,000th is called a satoshi or a sat, and the current exchange rate is about 1 dollar for every 2500 sats depending on when you happen to be listening to this.
If you send a message along with your sats it is called a boostagram, and if you send me one, I’ll read your boostagram on the show. Normally I read reviews, but you can only really leave a review once. With a boostagram, you can send as many as you want.
The best part is that the message and the sats go directly to me with no one in the middle. No one takes a cut, and I literally have a window open on my desktop as I work to get notified of incoming boostagrams. So long as you have a lightning wallet, this will work from any country in the world.
As this is brand new and I’m just launching this I don’t have a ton of boostagrams yet, but I do have a few from one of the main developers on the Podcasting 2.0 project Dave Jones, who is a regular listener to the show.

He sent 2112 sats after the episode on the Tomb of Alexander the Great. He said: The biblical prophecies relating to Alexander the Great have always fascinated me. They are very compelling. Especially relating to his conquest of Tyre and Sidon.
He also sent another 2112 sat boost after the episode on the Hunga Tonga–Hunga Ha?apai Eruption saying, Ok, here’s a boost just for saying this impossible to say name. Good one Gary!

Thank you, Dave and thanks for the sats!
Remember, if you leave a review or send me a boostagram, you too can have it read on the show.