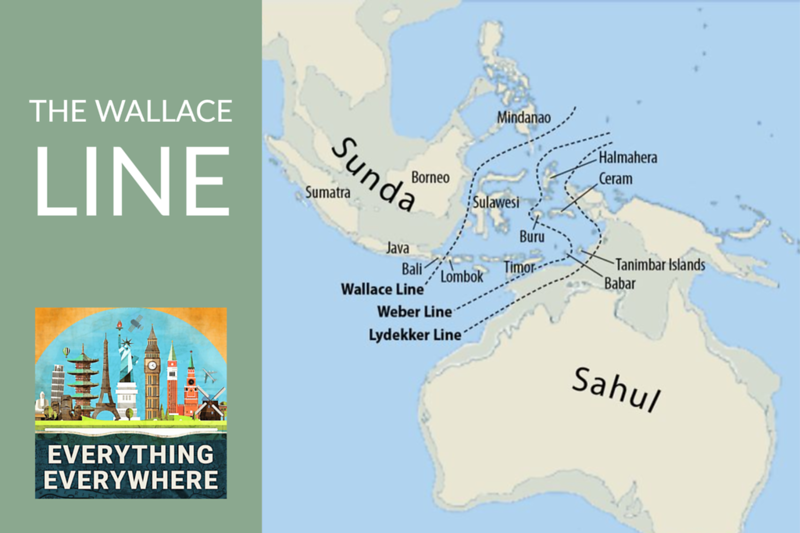 Charles Darwin is often credited with the discovery of the theory of natural selection.

This is true, but it isn’t totally true. He didn’t do this alone. In particular, there was someone else who did much of the research that lead to the discovery.

In the process, he also made a discovery that bear’s his name and influenced the fields of both biology and geology.

Learn more about Alfred Russell Wallace and the Wallace Line, on this episode of Everything Everywhere Daily.

Unless you happened to have studied evolutionary biology, you probably haven’t come across the name Alfred Russell Wallace, which is a shame, because he had a large part to play in the development of 19th-century science.

Wallace was born in Wales in 1823, but he wasn’t Welsh. His family was English and just had a short stint in Wales where he happened to have been born.

His family was middle class, but his family evidently lost a great deal of money.

He initially studied to become a surveyor so he could work for his brother’s surveying company, but that went out of business.

He put his skills to use as a lecturer at the Collegiate School in Leicester, England where he taught drawing, mapmaking, and surveying.

While in Leicester, he met a 19-year-old entomologist named Henry Bates.

Bates introduced Wallace to collecting insects and to biology in general.

Wallace went back to surveying, got hired as a civil engineer, and bounced around at different jobs. All the while, however, he was devouring books about geology and natural history, including Charles Darwin’s book, The Voyage of the Beagle.

The more he read, the more inspired he became by the naturalist authors of these books who traveled around the world studying plants, animals, and rocks.

In 1848, Wallace and the aforementioned Henry Bates set off for Brazil.

Wallace ended up spending four years in Brazil collecting insect samples, traveling around, and taking notes about everything he observed.

In July 1852, he set back for England, but 25 days into his journey, the ship caught fire and he lost almost everything he had collected and written from the previous four years.

He and the crew did manage to make it back to England after being set adrift in a rowboat.

Despite losing most of his collections and notes, he still managed to write six academic papers and two books, which put him on the map in the naturalist community in Britain.

In 1854, he set out again on what would be an eight-year journey to the Malay Archipelago.

FYI, the Malay Archipelago is the name given to all of the islands in Southeast Asia which includes the modern countries of Malaysia, the Philippines, Indonesia, Brunei, East Timor, Singapore, and Papua New Guinea.

This was the trip that ended up making him famous.

His primary goal was simply to collect specimens for natural history museums back in England.  He collected a large number of specimens and had at one time 100 assistants working for him.

Of special note was a young man by the name of Ali from the province of Sarawak on the island of Borneo. Ali, who later went by Ali Wallace, adopting the last name of his mentor, was a top-notch naturalist in his own right and was personally responsible for the collection of an enormous number of the specimens which Wallace sent back.

Over the 8 years Wallace was in the Malay Archipelago, he and his team collected over 125,000 samples, 83,000 of which were beetles.

Wallace returned to England in 1862 and set out to organize his massive collection of samples. He also began lecturing to groups about his travels, discoveries, and his theory of natural selection.

In 1858, he and Charles Darwin jointly published an article titled “On the Tendency of Species to form Varieties; and on the Perpetuation of Varieties and Species by Natural Means of Selection”.

This paper was really the first public explanation of the theory of natural selection that Darwin would make famous one year later with his book, “On the Origin of Species”.

Alfred Russell Wallace, by all rights, should be considered the co-discoverer of the theory of natural selection and evolution.

Wallace later published his best-selling book, The Malay Archipelago, in 1869, and it has never gone out of print to this day.

This episode isn’t about Alfred Russell Wallace per se, nor his thoughts on natural selection.

It is about an observation he made in 1859 while he was in Asia.

As he was collecting specimens, he noticed something very odd.

If he mapped it out, he was able to draw a line on the map with all the mammals of one type on one side, and all of the mammals of another type on the other side of the line.

This line was dubbed the Wallace Line.

The Wallace Line is known as a faunal line, as it separates different species of animals.

From a biological standpoint, the Wallace Line divides Australia from Asia.

The islands to the east of the line, but not including Papua New Guinea or Australia are collectively known as Wallacea.

The term “Wallace Line” was first coined in 1868 by the biologist Thomas Huxley. The difference was that Wallace put his line to the west of the Philippines, and Huxley placed the line to the east, just below the island of Mindanao.

The Huxley modified line is the one that is generally considered the Wallace Line today.

The Wallace Line mostly deals with land mammals and not birds or plants, which can move between islands much easier. However, there are still notable differences in flora, bats, and birds on either side of the line, it is just that the differences aren’t as pronounced.

So the big question is why are the animals so different on either side of the line?

What Wallace couldn’t know at the time was that there was a very good, logical reason for why the line existed. He just didn’t have the data at that point.

It all has to do with ice ages.

If you remember back to my episode on the last glacial maximum, when glaciation was at its peak, the sea levels dropped dramatically. Almost everything to the west of the Wallace Line was connected by land to Asia, which allowed for mammals, including people, to easily move.

Almost everything to the east of the line was connected to Australia.

The Wallace Line just so happens to correspond to the deepest part of the straits between the islands where the land wouldn’t have connected when the sea levels dropped.

The animals on either side of the line were last connected millions of years ago when plate tectonics had connected the two regions.

Over time, there were further additions to the Wallace Line to better delineate species.

A German zoologist named Max Carl Wilhelm Weber created the Weber line which snakes to the west of the Maluku Islands and to the east of the Lesser Sunda Islands, which includes East Timor.

A final line, the Lydekker Line, named after the English biologist Richard Lydekker, separates Australia and the island of New Guinea, from all the other islands in the Malay Archipelago.

The Weber and Lydekker lines provide further subdivisions of both zoology and geography.

Wallace continued research into natural history for the rest of his life. In 1874 he created a map of the world that divided the Earth into seven Biogeographic regions.

The Nearctic, which consists of all of North America down to the rainforests of southern Mexico.

The Palearctic, which is all of Europe, North Asia, North Africa, Central Asia, and the Levant.

The Afrotropical, which is everything in Africa south of the Sahara Desert including the Sahel.

The Indomalayan, which is everything on the Indian Subcontinent south of the Himalayas, all of South East Asia, Southern China, and the Malay Archipeligo.

The Australasian, which Australia, New Zealand, and Papua New Guinea.

The Neotropical, which is all of South America up to where the deserts of Mexico begin.

And finally, Oceanian, which is everything in the Pacific Ocean not mentioned.

These are very broad classifications, but they are still the basis of biogeography today.

In 1904, he wrote a book titled ??Man’s Place in the Universe, where he was the first serious biologist to contemplate the idea of life on other worlds.

In 1908, the Linnean Society issues the Darwin-Wallace Medal, to honor both of their contributions to the theory of natural selection and evolution.

Wallace died in 1913 at the age of 90. At the time of his death, he was lauded as an equal to Darwin. However, over time, Darwin became the person who got all of the credit, and Wallace was only remembered by serious students of biology and evolution.

That is a shame because Alfred Russel Wallace’s observations and theories were instrumental to the development of modern biology.

Today’s review comes from listener Rasgards over at Apple Podcasts in the United States. They write,

You’ve put together an excellent show Gary. Always interesting with superb production quality. I particularly love the episodes that I actually know something about. The deepest SCUBA dive I’ve made, was while serving Whale Rock buoy in Pago Pago harbor at 136ft. Love the Samoas and the Samoan people. Keep up the good work!

Thanks, Rasgards. 136 feet is about 41.5 meters, which is pretty much the limit of recreational diving. It is around the same as my deepest dive, and really probably as deep as anyone should go.

My first trip to Pango Pango was in 2007. I had developed impetigo on my skin while in Fiji, so I went to American Samoa to recover. Mostly sat in my hotel room and just made a few trips into town.

I went again in 2016 where I got to explore a bit more, mostly visiting American Samoa national park. I never got to go diving in Samoa, however.