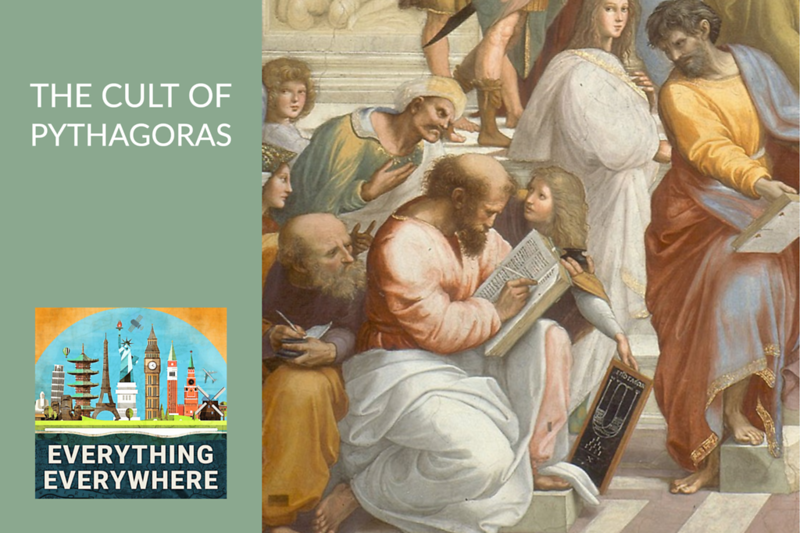 He was one of the greatest thinkers of the ancient world. He was a philosopher, a mathematician, and had some unique views on diet and religion.

You probably know him best for the theorem which bears his name.

However, if you asked anyone 2,600 years ago, they might have known him for something else entirely.

Learn more about Pythagoras, his ideas, and the cult that the led, on this episode of Everything Everywhere Daily.

The Pythagorean Theorem is something everyone learns in school. I’m sure that everyone listening right now has heard of it and probably knows what it is.

I’m also guessing that most people probably don’t know much about Pythagoras beyond the fact that he was some ancient Greek mathematician guy.

However, there was a whole lot more to Pythagoras than just triangles.

Pythagoras was born sometime around the year 570 BC in Greece.

There is little that we know about the early life of Pythagoras because none of his original writings have survived nor have any contemporary writings about him.

There are stories about Pythagoras’s early life which were written after the fact, but these were mostly tales to illustrate a point. The stories which were told about him either make him out to be a genius or a crackpot.

He also supposedly was educated outside of Greece. He might have received his education in Egypt, Mesopotamia, or the Levant.

He eventually returned to Samos and started a school which was known as the Semicircle. His teaching ability became legendary and supposedly intellectuals from all over Greece came to hear him lecture.

The real story of Pythagoras starts when he was about the age of  40 and moved to the Greek colony of Croton which was down near the foot of Italy.

It isn’t clear why he moved. Some say it was because of the ruler of Samos and others that he was sick of the burdens placed upon him by the citizens of the island.

However, it was in Croton that he established the first Pythagorean community.

The Pythagoreans would, by modern standards, be considered…..bizarre.

By ancient standards, however, the Pythagoreans were…… still pretty bizarre.

What Pythagoras created was basically a cult, and by a cult, I mean both a cult of personality and a religious cult.

Pythagoras was worshiped as a demigod by his followers. They literally called him “the divine Pythagoras”. They would tell others that Pythagoras was the son of one of the gods, usually Apollo or Hermes.

There were songs of praise written to him, and his followers believed he had supernatural powers. He supposedly had the ability to tame eagles and bears by petting them, and he could control any animal by just speaking to it.

He was once bitten by a snake, and he killed it by biting it back.

Aristotle wrote that he was supposed to have had a golden thigh and that he displayed it at the Olympic games. He also once showed his golden thigh to a priest who gave him a magical arrow that allowed him to travel long distances.

FYI, from now on if I ever cook chicken thighs until they are golden brown, I’m going to call them Pythagorean Style Thighs.

There were also legends that he could appear in two places at once.

So, this is all definitely checks the all boxes for a creepy cult leader.

He also had an enormous number of rules that his followers had to adhere to.

For starters, all new members had to keep a vow of silence for five years. The silence was in theory supposed to keep the new initiates pure, but it was more likely a way for them to keep secrets as they became acclimated to the cult.

All of the Pythagoreans were vegetarians. Pythagoras required everyone to abstain from meat because he believed that animals were former human souls.

Pythagoras supposedly was walking down a street when he saw a man beating a dog. He had the man stop because he claimed it was one of his former friends and he could tell from how the dog barked.

As vegetarians went, Pythagoras was a pretty bad one because he still sacrificed living animals. Chickens, cattle, pigs, and goats were acceptable but you could never sacrifice sheep.

This pretty obvious hypocrisy was noted while he was alive. There was a joke that Pythagoras was found eating meat even though he claimed to eat no living thing. When Pythagoras was asked about it, he supposedly said that he killed it first, so it wasn’t living.

However, in addition to meat, cult members were also not allowed to eat or touch beans. Pythagoras believed that fava beans contained the souls of the dead. Also, you couldn’t eat them because it resulted in flatulence, and when you passed gas, you lost part of your soul.

Followers were required to always put their right shoe on first.

The cult had no five-second rule, so if anything fell to the floor, they could not eat it.

All sexual relations were discouraged, but if you must, you should only do it in the winter, never the summer.

You also couldn’t break bread with your hands, nor stir a fire with iron.

All of these rules certainly sound odd, and they were, but what exactly were the beliefs of the Pythagorean Cult?

The cult was part philosophy and part religion.

They did worship Apollo, in particular, the aspect of Apollo who was the god of the oracle of the Temple of Delphi.

As I mentioned, they sacrificed animals to the gods, but also engaged in other many other rituals for purification and burial.

Pythagoras believed that souls were immortal and believed in reincarnation. Supposedly Pythagoras himself could recall four previous lives where he was the son of Hermes, a fisherman, a minor hero in the Trojan War, and a courtesan.

So far, none of this has anything to do with triangles. Where do triangles come into play?

Well, perhaps the biggest belief in the Pythagorean Cult had to do with mathematics.

Pythagoras believed that everything in the universe could be expressed through mathematics.

Mathematics to the Pythagorgreans was geometry and natural counting numbers. Numbers were represented as dots, not by symbols as we do today.

If I wanted to represent 3, for example, I’d make 3 dots in a triangle. Numbers were thus a visual and very real thing.

Pythagoreans would engage in mathematics as a spiritual exercise, not to solve any practical problems.

Numbers had different meanings. The number one was related to intellect and being. The number four represented justice. The number seven was wisdom. The most important number was 10, as it was a pyramid of 4, 3, 2, and 1 dots. That symbol was known as a Tetractys.

As such, Pythagoreans would never gather in groups of more than 10.

They had a prayer to the number 10 which read

Bless us, divine number, thou who generated gods and men! O holy, holy Tetractys, thou that containest the root and source of the eternally flowing creation! For the divine number begins with the profound, pure unity until it comes to the holy four; then it begets the mother of all, the all-comprising, all-bounding, the first-born, the never-swerving, the never-tiring holy ten, the keyholder of all.

Numbers linked everything in the world together for Pythagoreans. Pythagoras believed that the seven planets (which were the sun, moon, mercury, venus, mars, Jupiter, and Saturn) corresponded to the seven muses.

Pythagoreans, to their credit, were some of the first people who believed that the Earth revolved around the sun and not the other way around.

However, they believed that the planets moved in perfect circles.

They also discovered the relationships between mathematics and music. They experimented with strings and woodwinds of different lengths to produce different notes. They discovered octaves, fifths, and forths.

For those of you who need a quick refresher, the Pythagorean Theorem simply states that for any right triangle, the square of the hypotenuse is equal to the sum of the squares of the other two sides.

While Pythagoras is credited with the discovery, and while he very well may have independently discovered it, he certainly wasn’t the first.

Pythagoras may have brought the theorem to the Greeks which is why his name is associated with it.

While he got credit for the Pythagorean Theorem which maybe he shouldn’t have, he also might not have gotten credit for identifying the five Platonic Solids, which were named after Plato.

However, according to legend, one of his followers by the name of Hippasus proved that the square root of two could not be expressed as a ratio of any two numbers. The number was irrational.

This completely poked a hole in the entire Pythagorean worldview.

As punishment Hippasus was drowned in the sea so this secret could never be revealed.

During the life of Pythagoras, there were multiple Pythagorean communities that sprung up around the south of the Italian Peninsula.

Women were considered equals in the Pythagorean community and were able and encouraged to study alongside men.

There are several different stories as to the death of Pythagoras. All of them revolve around an attack on the Pythagorean community after a falling out with other locals. They supposedly burned down the building that he and some of his followers were in.

According to one story, he died in the fire. In another story, his followers laid themselves down over the flames so he could walk over them to flee, but after he was out, he committed suicide because he felt so guilty over their sacrifice.

In yet another story, he fled the building only to encounter a field of beans. Rather than run through the field which would be counter to his beliefs, he stood at the edge of the field where he was cut down.

The Cult of Pythagoras survived his death for several years, but eventually, it just withered away.

While many of the ideas of the Cult of Pythagoras seem really weird, many of these beliefs did trickle down to other Greek philosophers.

Pythagoras influenced Plato’s work on mathematics and his community might have served as inspiration for his book The Republic.

Aristotle pretty much rejected all of Pythagoreanism, but still seemed to have respect for Pythagoras.

There was a Neopythagoreanism revival in the first century which combined Pythagorean ideas with stoic and other philosophies.

His ideas on the harmony of the universe were adopted by early Christian thinkers, and his belief in heliocentrism obviously became adopted in the 17th century.

Many 17th-century scientists and philosophers also built off the Pythagorean theories of music and harmony.

For somewhat obvious reasons, Pythagoras isn’t studied in the same way that other ancient philosophers are today. For starters, we don’t have any of his original writings, and most of his beliefs were sort of silly in hindsight.

Today’s review comes from listener NutraGrain Bar over at Apple Podcasts in the United States. They write,

This is the best podcast I’ve ever listened to. All the episodes are really interesting. I also feel like I’ve learned more from this podcast than I learned in my history class.

Thanks, NutraGrain Bar! Lest there be any doubt, you are in fact learning more here than you did in history class. For starters, you have a great teacher, and you don’t have to sit in a desk staring at the front of a room for 50 minutes.