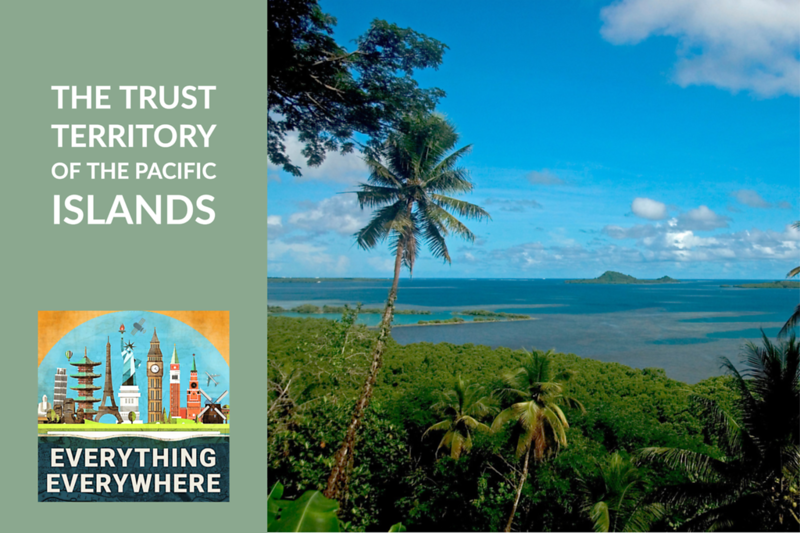 In the aftermath of World War II, the newly formed United Nations placed a group of Pacific Islands into a trusteeship that was to be administered by the United States.

After several decades, that trusteeship was dissolved and it resulted in three independent countries, one US territory, and a unique system of international relations.

Learn more about the Trust Territory of the Pacific Islands and the countries of Micronesia, on this episode of Everything Everywhere Daily.

I had an internal debate about where to start this episode and what to limit it to.

Micronesia as a geographic location is roughly located north of Papua New Guinea and east of the Philippines. It isn’t the same as Polynesia.

The Polynesian migration was, historically speaking, a relatively recent event, and most Polynesian languages are relatively similar to each other.

The people of Micronesia arrived on their islands much earlier, as they are much close to Asia, and their languages have diverged much more.

Geographically, Micronesia consists of the countries of Kiribati, Nauru, the Marshall Islands, the Federated States of Micronesia, Palau, and the US territories of Guam and the Commonwealth of the Northern Mariana Islands.

The fact that there is a country also called Micronesia just makes it more confusing.

For this episode, I’m going to be focusing on the modern geopolitical region called Micronesia, which is everything I just mentioned above, except for Kiribati and Nauru. I had previously done an episode on Nauru and both of those countries were formerly British colonies before they achieved independence.

These islands were originally colonized by the Spanish who lost Guam to the Americans in the Spanish-American War and then sold the rest of them to the Germans in 1899. After the first world war, they were given to Japan by the League of Nations, and they were called the South Seas Mandate…..even though they all sat north of the equator.

This story starts after world war two. Japan was defeated and the United States was occupying these islands having taken them over during the war.

On July 28, 1947, the United Nations security council passed Security Council Resolution 21 which established the Trust Territory of the Pacific Islands, or the TTPI, which was to be administered by the United States.

It was initially managed by the United States Navy out of Guam and in 1951 control was switched to the Department of the Interior who ran operations out of the island of Saipan.

The TTPI was divided into six districts: Chuuk, the Mariana Islands, the Marshall Islands, Palau,  Pohnpei, and Yap. Later in 1977, a seventh district was created with the island of Kosrae.

For all practical purposes, the TTPI was treated as if it was a US territory, even though technically it wasn’t.  They used the US Dollar, adopted similar electrical systems, drove on the right, and English became the official unifying language of the region.

The entire region at the time had a very small population. In the 1950s the entire region, including all 100 populated islands, only had about 100,000 people.

All of these different regions, however, didn’t really have that much in common, other than the fact that they happened to live on islands that were generally in the same part of the Pacific Ocean.

Initially, the United States wasn’t interested in granting independence to the islands, but over time it became obvious that the people in the TTPI did want independence.

There was never really any effort or desire to make the entire region a single country. No one who lived there wanted it because, again, the islands were too different from each other and too spread out.

Each of the island groups took a totally different path which resulted in the state of affairs we have today.

The people in these islands are Chomorro which is the same ethnic and linguistic group as the people in Guam. It is a historical accident that Guam has been separated from the other islands in the chain.

In 1958 a referendum was passed in the Northern Marianas to merge with Guam, and it similar motion was approved by the Guam legislature, but nothing was done.

Similar referendums were held in 1961 and in 1963, both of again passed overwhelmingly.

With the dreams of merging with Guam off the table, the people of the Northern Marians went for the next best thing which was a similar status to Guam as a US Territory.

The UN Security Council approved the arrangement and on November 4, 1986, the Commonwealth of the Northern Marianas Islands became a territory of the United States, and the people on the islands became US citizens.

There is still support for a unification of the Marianas Islands as regardless if the future should be independence or statehood, anything will be easier if they are unified. As of today, however, nothing has been done.

The Northern Marianas is a really interesting palace to visit. I spent several days on Saipan, and there is a whole episode about how they managed to skirt US minimum wage laws and the aftermath of closing that loophole.

Of the six remaining divisions of the TTPI, four of them came together in 1979 to ratify the constitution of the Federated States of Micronesia. The four were Yap, Chuuk, Phonpei, and Kosrae.

These four divisions became the states in the Federated States of Micronesia. Each state is centered around the main island which shares the name of the state.

The Marshall Islands didn’t want to join the Federated States of Micronesia. Not only were they physically and culturally separate, but they also had a very different relationship with the United States.

I’ve spoken many times in past episodes about atomic bomb tests which were conducted in the Marshall Islands, primarily on the atolls of Bikini and Enewetak.

The United States was paying compensation to the Marshallese for these tests, for clean-up, and to the families that were moved off of their home islands.

The Marshallese didn’t want to share this money with other islands, so they set off on a course of independence. They also become independent in 1986 and signed a compact of free association with the United States.

Both the Republic of the Marshall Islands and the Federated States of Micronesia became members of the United Nations on September 17, 1991.

The final group, and one of the smallest, was Palau. Many of the dates I’ve mentioned for the previous islands were all very similar. Palau’s path was a little bit different.

Technically, Palau was part of the Caroline Islands with the rest of the Federated States of Micronesia. They were the westernmost islands and during the later stages of the war, they were actually administered out of Manila.

Palau voted for independence and became the Republic of Palau in 1981 and signed a compact of free association with the United States in 1982.

Even though they were officially the first of the Micronesian countries to become independent, they were the last to join the United Nations in 1994.

One of the odd things about Palau is that they are one of the smallest countries in the world with a population of only about 18,000 people, yet it has 16 different states. Moreover, when I visited Palau, I noticed that each state had its own license plates. The smallest state, Hatohobei, has a population of only 25 people, but I have no clue if they have cars there.

So, the Federated States of Micronesia, Palau, and the Marshall Islands are all now independent countries and they have all signed a compact of free association with the United States.

So, what is a compact of free association?

It is an agreement that explicitly sets out the rights that each country and its citizens have with each other.

While each country has a separate agreement with the United States, there are broad similarities.

The reason they are in Arkansas is that word got around that there were jobs at chicken processing plants with Tyson Foods, and Marshallese moved there.

The flip side is that American citizens can visit all three countries without a visa and can stay there indefinitely.

All three countries use the US postal system. Believe it or not, there are zip codes and state codes assigned to all the countries and you can get send packages to any Micronesian country for the same rate as sending a package in the United States.

This actually caused a diplomatic incident years ago when the Postmaster General, apparently not aware of the compact, was going to change postal rates to the Marshall Islands as international.

The state codes for the countries are FM for Micronesia, MH for the Marshall Islands, and PW for Palau.

The United States also provides services delivered by the military. When I visited, I saw a unit of American army engineers working on a school in Majuro and a Navy unit building a basketball court in Palau.

A Navy medical ship had arrived in Majuro in the Marshall Islands just a week before I visited, which did checkups for locals.

The biggest thing that the United States provides is economic aid and of course, they provide defense for all three countries. Citizens of all three countries can volunteer to serve in the US military without having to become naturalized citizens.

Micronesia actually has high rates of service and you can find US military veterans in almost every village. There was a documentary film made about Micronesians who serve in the US military called Island Soldier.

The US has a single military base in the region. A missile testing range on the island of Kwajalein in the Marshall Islands.

This region gets very few visitors. It actually isn’t hard to visit as there are regular flights on United Airlines. However, few people bother to do it.

The Marshall Islands and the Federated States of Micronesia can be reached on a flight called the island hopper which goes from Honolulu to Guam and Guam to Honolulu every other day.

Guam is the hub for the region and from there you can easily reach Yap, Palau, and Saipan.

It is a fascinating part of the world and one that I wish more people would visit. The ruins of Nan Madol on the island of Pohnpei are one of the most underappreciated historical treasures in the world and should be considered on a par with Easter Island.

Palau has some of the best scuba diving in the world and has probably done more than any other country to protect their marine environment because so much of their economy depends on tourism.

I’ve been all over the world, and the region of Micronesia is one of my favorite and I fully intend to return someday.

The region of Micronesia is a unique place, with unique people, and a fascinating story.