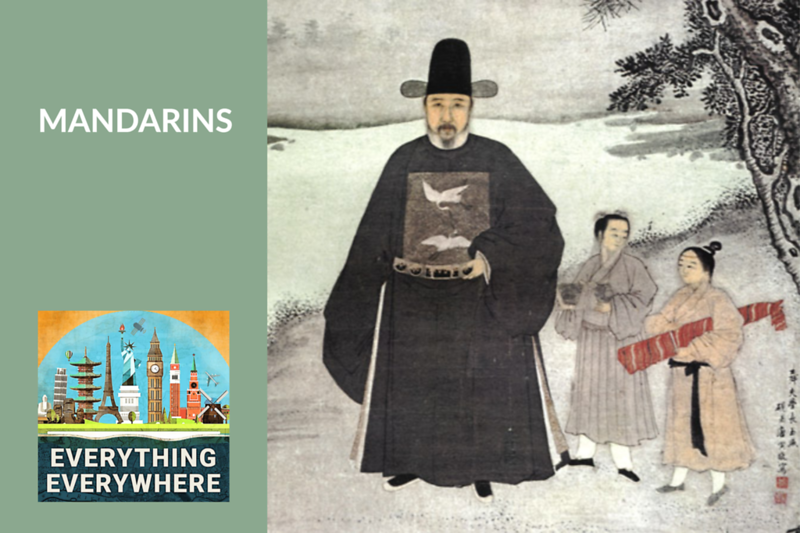 In the year 607, the Emperor Yang of the Sui dynasty implemented a reform whereby a series of exams would be administered throughout the empire to create a bureaucratic elite that would administer the country.

That reform became one of the bedrocks of Chinese society, through every dynasty, for the next 1,300 years. The effects of these exams can still be felt in Chinese society today.

Learn more about the Mandarin class and the Imperial Examination system on this episode of Everything Everywhere Daily.

The concept of a class of people who administered kingdoms or empires wasn’t invented in China.

Pretty much every ancient empire from Egypt to Babylon had some group of priests or scribes who was responsible for the day-to-day administration of the state.

These elites in society would sometimes have a monopoly on literacy, with the ability to read and write being passed down through families over generations.

In Rome, administrative positions weren’t hereditary, but they weren’t appointed on merit either. Positions like aediles and quaestors were won via election, and elections were often determined by popularity and bribes, not by who would do the best job.

In ancient China, there too was a class of bureaucrats who were responsible for the administration of the state. The first such people all came from aristocratic families.

The first imperial exams for admission to the administrative class were administered in 165 BC during the Han Dynasty by Emperor Wen. However, passing an exam wasn’t a guarantee of employment. Almost all civil service jobs were handed out on the basis of recommendations from aristocrats.

The tests were mostly about categorizing those candidates who had already been recommended by those in positions of power.

The total number of people who were placed in positions of authority during this period was quite small.

During the Three Kingdoms Period which followed the Han Dynasty, a nine-rank system was introduced in the Wei Kingdom.  This system created a hierarchy of civil service positions with the top being an advisor to the king or emperor, whereas the bottom might just be a local tax collector.

This system was open to the lower classes, but only the lower ranks of the system. The upper ranks were still reserved for the elite.

The revolutionary change in how civil service jobs were allocated in China began during the Sui Dynasty.

In 607, Emperor Yang created a new system of exams that would serve as the basis for the Chinese civil service until the 20th century.

The system wasn’t totally open yet. There were still some hereditary positions, and certain classes such as merchants and craftsmen were still barred, but it was a big improvement.

The Emperor Wen of the Sui Dynasty overhauled the civil service such that all officials going down to the local districts had to be appointed by the central government. There were now annual evaluations of civil servants, and regional administrators were moved every three years so they couldn’t become more entrenched in one place. Likewise, they couldn’t bring their parents or grown children with them so they couldn’t install them into plush jobs.

The Tang Dynasty, which was installed at the end of the 7th century, instituted more reforms. One of the biggest was initiated by Empress Wu, who was the only woman to rule China in her own right. She had many enemies amongst the upper class, so she expanded who could take the test to improve her support with the lower classes.

The Hanlin Academy was also established during the Tang Dynasty which was the premier learning institution in the country. It was for the cream of the crop of test-takers and it survived into the early 20th century.

Beginning in the mid 10th century, the Song Dynasty radically expanded the number of people who took the test. Now pretty much any male in China was eligible. It had become a true meritocracy. Even the lowliest peasant, if they studied hard enough, could pass the test and change his life and his family’s, forever.

When the Mongols invaded and conquered China, Kublai Khan initially ended the testing system, however, it was eventually brought back. The new system placed limits on the number of ethnic Chinese who could pass, favoring Mongols, and changed some of the subjects.

After the Mongols fell, the Ming Dynasty restored the tests to their previous importance.

The last Imperial Dynasty, the Qing, continued with the exams. The 19th century saw many reforms in the imperial exams including opening them up to women for the first time. In 1853 a woman by the name of Fu Shanxiang (???) became the first and only woman to achieve the title of Zhuangyuan (??), which is given to the person who gets the highest score on a test.

The imperial tests were eventually abolished in 1905 at the end of the imperial era as part of a series of modernization reforms.

So, what subjects did the tests cover and what were they tested on?

The test was primarily centered on the Four Books and Five Classics of ancient China. These are the books that define the core of Confucian philosophy.

This was the core of the tests which lasted for almost all of the imperial period.

There were other subjects introduced over time as well. There was a test on Poetry, which was designed to counter cheating because it wasn’t just about rote memorization. There were questions based on history, statecraft, and knowledge of the government. In later tests, it was expanded to mathematics, astronomy, and science.

There were periods where an oral exam was a part of the test, but it tended to favor those who came from backgrounds who spoke a similar dialect as the test administrators.

There was almost nothing in the test about creativity or problem-solving. The most important thing when it came to passing the test was rote memorization.

There were three different levels of the test, and each level was sort of the equivalent of a bachelor’s, master’s, or doctorate degree in the west.

There was a pre-test which qualified you for the tests, and then there were provincial tests, metropolitan tests, and finally, the palace test which was, in theory, proctored by the emperor himself.

Eventually, the tests were only administered once every three years. The title jinshi (??)was awarded to someone who managed to pass all three exams and it was the equivalent of a doctorate.

There were no age requirements for the test, which means that it was not unheard of for two or three generations in the same family to take the test at the same time. The average age for someone passing the first test would be in the 30s, and the average age of someone passing the third test would be in the 40s. It was rare for anyone to be ready for the test before they were 30, let alone to pass.

During the Song Dynasty, one man named Liang Hao famously passed the exam at the age of 84.

Studying for the test took years, often doing nothing else but studying. While the tests were in theory open to anyone, the reality was that families with money could afford books and tutors. Poorer families couldn’t afford the instruction or to have a family member not work in the fields.

Most of the tutors were people who did well on the test but failed to pass. If they had passed, they would have been working in the government.

Physically taking the test was an arduous affair and many of the test takers compared it to hell. Depending on what period in history the test was given, it would have been between 24 and 72 hours long.

The test takers were placed in a small cell with nothing but a board to lay down on, a board to use as a desk, and a bucket to relieve themselves in. They had to bring their own food, brushes, and ink to write with, as well as a blanket to cover themselves.

Families would come as a group to support their candidates. In the rare event that someone should die during the test, their body was wrapped up and dumped over the wall of the academy. Their families were not allowed to come in during the test to collect it.

It would usually take about a month for test results to come in.

Despite the importance of the tests, cheating did happen. It wasn’t unheard of for test officials to receive bribes. Even though test takers were checked, they also managed to smuggle in cheat sheets.

There are imperial exam cheat sheets that have survived. One is a 4-millimeter thin book the size of your palm with almost 90,000 microscopic characters of Confucian text written. Another is a handkerchief with 10,000 tiny characters written on it.

So, after years of study, and successfully passing your tests, what did you get for all your hard work?

You got to become a member of the Mandarin class. The term Mandarin is actually a western word that is derived from Latin. In Chinese, they were simply known as Guan (?), which means official.

Depending on what exam level you passed, you were given tax exemptions, lessened punishments from crimes, a good salary, and of course enormous social standing.

Again, depending on the test level you passed, you might have been an advisor to the emperor himself or am official in a province or a town. No matter where you winded up, you would have the respect of the common people.

Mandarin officials were also allowed to wear special robes which corresponded to their level.

I should also note that the Mandarin class is also where name of the predominant Chinese dialect comes from. It was the standard dialect used by these officials. In Chinese it is called Gu?nhuà (??/??) or ‘language of the officials’

The legacy the imperial exam system left was rather mixed.

On the negative side, the way the tests were structured incentivized rote memorization and conformity, instead of critical thinking and creativity. In some of the later dynasties, the inability to adapt to changes in the world was to their detriment, and it was in no small part due to the educational system developed over centuries.

On the other hand, the exam system imbued the importance of education and literacy to almost every social class and segment of society in China. Probably more than any culture on Earth at the time. The exams strongly linked the ideas of success with learning in Chinese civilization.

The imperial exam system served every Chinese dynasty for almost 1300 years. Other than similar systems in East Asia which copied it, there really wasn’t anything quite like it in the ancient world. It was one of the few implementations of a legitimate meritocracy in the world you can point to before the modern era.