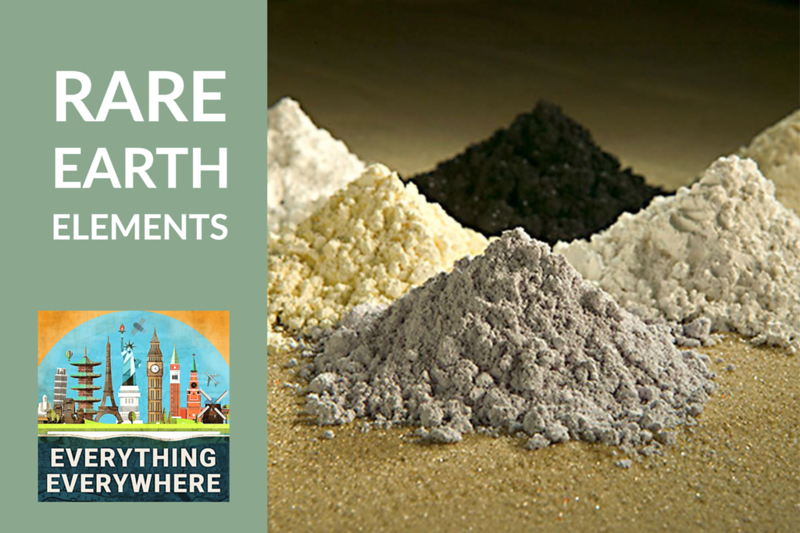 All of those things are dependent on a small category of chemicals called rare earth elements.

Their importance in technology has made them a focal point of international trade and politics.

Learn more about rare earth elements and how the world has become completely reliant on them, on this episode of Everything Everywhere Daily.

So let’s start out with the fundamentals. What is a rare earth element?

There are 17 rare earth elements on the periodic table.

The two lightest are scandium and yttrium which are located in the 3rd period or 3rd column of the periodic table.

The other 15 are the lanthanide elements. If you’ve looked at a periodic table, you might have remembered that there is a section of elements that are separated from the rest and form two rows at the bottom.

The lanthanides are the top row of those two rows.

After reading that list, my hat goes off to Tom Lehrer.

So, I think it is fair to say that, for the most part, none of us deal with these elements on a daily basis.

They are all soft, silvery metals and are rather heavy.

However, I don’t want to get into a chemistry analysis of each element because that would be painfully boring and most of you would end up pouring wax in your ears.

I will add as a fun fact that four of the 17 elements are named after the village of Ytterby in Sweden.

What is really interesting about rare earth elements is their importance in the world economy, because they are really, really important.

If you remember back to my previous episodes on specific elements and the periodic table, most elements were discovered in the 19th and early 20th centuries. It became a lot easier once the periodic table of elements was set and it was possible to see where the holes still were.

Here I should note that most of the rare earth elements are not in fact all that rare. To be sure, they aren’t as common as iron and silicon, but most of them are on a par with other metals like tin or gold. The least common element is Promethium, which actually is quite rare and radioactive, and the most common is Cerium, which is the 25th most common element in the Earth’s crust.

The rare earth elements weren’t really that big of a deal prior to the year 1965. They were more of curiosity but they didn’t have that much economic value.

So what happened in 1965? Color television.

It turned out that one of the key components for color TVs was the element europium.  As color TVs were a huge thing for TV manufacturers, there was suddenly a huge rush to find europium.

Over the years, more and more uses were found for rare earth elements.

One of the biggest uses was found in extremely strong natural magnets. In particular, Neodymium magnets. They were discovered in 1984 by General Motors and they are the strongest commercially available magnets you can buy today.

So it shouldn’t be too difficult to see just how important these elements are to the world economy. No more rare earth elements, no more modern technology.

So, where do these rare earth elements come from?

Before World War II, what little production of rare earth elements there was all came from easily minable sands in India and Brazil. Because it was sand, it didn’t require a huge operation to extract the raw ore, and there wasn’t a lot of demand anyhow, so not much needed to be produced.

Through most of the 1950s, most of the world’s production was located in a single location, the Steenkampskraal mine in South Africa.

That shifted when the aforementioned Mountain Pass mine opened in California. Again, this single mine was responsible for most of the rare earth mineral production in the world for years.

Then in the 1980s, Chinese leader Deng Xiaoping made what in hindsight was a brilliant decision. He made the production and processing of rare earth minerals a priority for China. As he noted in 1992, “the Middle East has oil, China has rare earths.”

The reason why their share of the global market was so great had more to do with prices than with the number of rare earth elements available.

China was able to undercut global prices which drove many non-Chinese producers bankrupt, including the Mountain Pass mine, in California.

However, global demand for rare earth metals hasn’t decreased. Since 2010 global production has almost doubled, but production in China has remained somewhat flat. They are still the largest producer in the world by far, but now other countries have been ramping up production.

Demand for rare earth elements will probably increase even faster in the not-so-distant future.

Electric cars are heavily dependent on rare earths. Electric motors require their use for magnets. A Toyota Prius has about 25 pounds or 10 kilograms of lanthanum.

Likewise, generators in windmills need rare earth metals, as do solar panels, and even the magnets in nuclear fusion reactors.

While the world isn’t running out of rare earth metals, many companies are working on alternative technologies which eliminate or reduce the amount of rare earth elements required. However, it is impossible to totally eliminate them.

The United States, Australia, Canada, South Africa, and other countries have begun searching for more rare earth deposits. It can be difficult to do because you can’t just look for ore like you would other metals.

The Mountain Pass mine was considered good because it had 0.1% europium, and the best mine in the world is one in China has a whopping 0.2%.

A massive find was made in Afghanistan back in 2011, but so far it hasn’t been possible to begin mining, and it isn’t known if it will be anytime soon.

The United States military has been trying to stockpile strategic reserves of rare earth metals. It has been said the total US reserves could fit in a suitcase. This has included reopening the Mountain Pass mine which was mothballed in 2015.

Another program has been increasing the recycling of rare earth metals.

Because they are elements, they can be efficiently recycled. As old electric cars and other electronics become retired, this will become more and more important, and it will recover more and more rare earth elements.

In the very distant future, it might be entirely possible to find some of these elements on asteroids or even on the moon.

These strange elements with funny names have become vital to our modern world and will become even more important in the not-so-distant future. The elements which were once novelties less than a century ago have now become indispensable.