Before we get too far into 2014, I figure I should publish my annual list of my favorite hotels from the previous year. Read my previous year end favorites from 2012 and 2011.

For the most part, I do not talk about hotels, airlines and the minutia of travel. There are people out there who care much more about this stuff than I do. I don’t travel to stay in hostels, I stay in hotels so I can travel.

That being said, I give myself one opportunity per year to talk about the hotels I stayed at during the previous year. This is that time.

Some explanation for how I compiled this list: The list is 100% subjective. I do not visit hotels with a checklist and inspect them looking for small problems. This list represents an overall impression of a place which often may be a factor of amenities, service, location or just a general feeling. Some places I paid my own way, and some were comped. I slept in over 150 beds in 2013 and the number may be closer to 200. There is no set number for the list. I could have been larger or smaller depending on where I stayed. The list is not a reflection of luxury. There are luxury hotels on the list, but there are also hostels. To be eligible for the list, I had to have actually slept there at least one night. Site visits do not count. This list represents my personal views. I’d gladly recommend any of these places, but your experience may be different than mine.

With that out of the way, here were my favorite places of 2013……


I had a hard time picking a favorite. I went back and forth between the Bitter End and Rosalie Bay. In the end, the deciding factor may have been the weather and breezes. I have felt more relaxed at the Bitter End than I have almost anywhere else in the world. The room I was in had no air conditioning, and it wasn’t necessary. My room overlooked the private islands of Richard Branson and Larry Page. I was there for 3 nights and I was tempted to extend my stay an extra week. Best known (as the name would suggest) as a yacht club, I enjoyed my stay even though I know nothing of yachting. I was there during the low season in June and the weather was better than it was in most of the US. 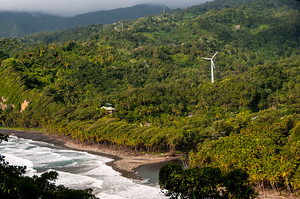 As I mentioned above, Rosalie Bay was a very close runner-up for my favorite, but for totally different reasons. Located on the windward side of Dominica, Rosalie Bay is one of the most eco-friendly resorts I’ve ever stayed at. Much of their electricity is generated by an onsite windmill. They have their own program for protecting sea turtle eggs which are laid on their beach. Most hotels in the Caribbean are located on the leeward side of their islands. The location of Rosalie Bay on the windward side actually added to the natural feel of the resort. This is not a place to go and sit on the beach, but as I don’t do that anyhow, it didn’t bother me in the slightest.


I’m not a very big fan of floating in the Dead Sea. I think it is one of the most overrated experiences I’ve ever had traveling. Being on the shore of Dead Sea, however, is great. You get about 10% more oxygen than you do at sea level at the Dead Sea and more UV rays are filtered by the atmosphere, so the risk of sunburn and skin cancer are less. If you are there when I was in late April, the temperature is almost perfect. My room overlooked the Dead Sea and I woke up to a breathtaking view.

Hotel Excelsior, Dubrovnik
Waking up and seeing the walled city of Dubrovnik outside your window isn’t a bad way to wake up. This was one of the most luxurious places I stayed in 2013, and I’m usually not impressed with luxury hotels. Its location just outside the Old City turned out to be better than staying inside the Old City. There are a few things I always look for in a hotel room. One is a giant bathtub and the other is a balcony with large doors that open so I can let the breeze in. The Hotel Excelsior had both, with an amazing view.


I’m not even sure what to call Battle Harbor. It isn’t really a hotel per se. It is located on an island which is an hour away from a town which is only connected to the rest of the world via a gravel road. Battle Harbor is a former fishing village which was abandoned after the Canadian moratorium on cod fishing in 1992. The buildings of the village have been converted so people can stay there. It is run by the Battle Harbor Historic Trust and it is only open in the summer. It isn’t an easy place to get to, but I’ll never forget the experience.

Generator Hostel, Dublin
Last year, I didn’t stay in as many hostels as I normally do. However, The Generator in Dublin was at the top of my hostel list and was one of the best hostel experiences I’ve had. The Generator is a very big hostel. I think they had over 500 beds. I felt it was very well managed for its size and the onsite bar and restaurant were not bad. The problem with many hostels is they lack service. Oddly enough, the large size of the Generator makes it better managed. I also stayed at the Generator in London, but I didn’t find it as nice. They were undergoing renovations at the time and I might go back in the future to get it another shot.


If anyone reading this has to find shooting locations for movies and you want a quintessential Victorian Manor, you should check out the Gliffaes Country House Hotel. Located in the hills in Southern Wales, it is a picture perfect country hotel, complete with a stream. I normally don’t like staying in older buildings, but I made a huge exception for the Gliffaes. I almost felt like I was in Downton Abbey when I was there.

If I were to get married and my future, fictional wife wanted a romantic place to have the wedding, I’d certainly suggest the Gliffaes.

Mantra on Kent, Sydney
It is a good thing I don’t release my end of year lists before the end of the year, because I would have left this hotel off my list. It was literally the last place I stayed in 2013. The Mantra on Kent was more of an apartment than a traditional hotel. What really made me excited about it was the washer and dryer that was in the room! I had never seen that before in a hotel room and I took advantage of it. I realize it isn’t economical for hotels to put washers and dryers in every room, but it was so nice being able to do my laundry without having to run up and down several floors. I also didn’t need to pay extra to use it.

I kept a running list of hotels this year specifically for this list. If I liked a place I would add it and if I still felt positive about it a month or so later, I kept it on the list. There was only one restaurant this year which really stuck out for me: The Monk Kitchen in the Templar Hotel, Toronto.

I’ve never been to a restaurant like this before. The Monk Kitchen is in the basement of the Templar Hotel. There is no menu. You go down and chef Roberto Fracchioni will make you anything you want, cooked to order. You can eat in the kitchen and talk to the chef while he is cooking, which I did several times during breakfast. His food is great and his stories are great.

It is the closest you will probably ever come to having your own personal chef. It is a culinary experience unlike anything I’ve experienced in almost 7 years of traveling around the world.

My favorite airline from 2013 has to be Qantas. I only flew them on domestic Australian flights and I’m not putting them on the list because of their inflight experience.

The check-in procedure for domestic Qantas flights is the most efficient I’ve seen anywhere in the world. The entire process is automated and I wish US airlines took notes on how they do it. There are no counters. Everything is a kiosk and is automated. The kiosk prints your baggage tag and you put it on the bag yourself. You then put it on a conveyer belt that scans and weighs it. You never have to deal with a person, unless you absolutely need to.

From the moment I first touched the kiosk to the moment I was finished with security, the total time was around 5 minutes!

They did also have one flight where they had iPads in every seat, which I thought was rather creative, but I didn’t use mine so that wasn’t the determining factor.

10 thoughts on “My Most Memorable Accommodations, Restaurants and Airlines of 2013”