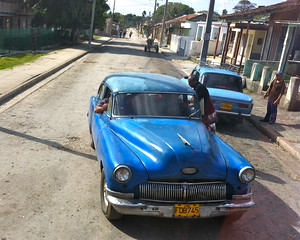 Cuba is slowly opening up to Americans. Contrary to popular belief, Americans can go to Cuba and do so legally. I’ve asked fellow blogger and Cheesehead Heidi Siefkas to give an overview for how Americans can travel to Cuba and why they may want to consider doing so now. Take it away Heidi…..

When I told my friends and family that I travel to Cuba, I receive many questions, all with puzzled looks. Many ask if it is legal. Others ask if it is safe. Others wonder why travel to Cuba at all. Having five trips under my belt this year alone as a tour director and four more trips this fall, I have fallen in love with Cuba, its people, and cultural richness. Although Cuba is not on the traditional traveler’s radar, I would like to share with you how you too can travel to Cuba. So here’s the skinny on legal travel to Cuba, how it’s done, and why you should travel to Cuba and NOW.

How can Americans travel legally to Cuba?

First, let’s get the truth out there. Cuba doesn’t prohibit Americans from traveling to Cuba. It is the U.S. government that limits travel to Cuba. Per the Treasury Department, Americans can travel to Cuba with a license from its Office of Foreign Asset Control. 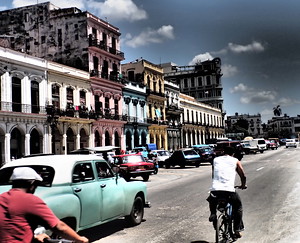 So if you want to travel to Cuba, how do you get one of these precious licenses to travel to the forbidden fruit of the Caribbean? There are three legal ways to travel to Cuba. Since many of the readers here will not fit into the fairly limited categories of journalist, full-time academic or research professional, or a person on official governmental business, I’ll skip to the way most Americans who want to experience traveling to Cuba can choose.

The most common legal travel option for Americans is through the “People to People” programs.

President Obama recently opened the “People to People” travel option for Americans who don’t qualify for independent licensing explained below and wish to visit Cuba on an educational tour. The tour operator is responsible for leading a tour that meets the “People to People” itinerary, which is very interactive and educational in nature. The tour operator is the entity that holds the license and adds the passengers to that license for a particular range of dates. This license is given to all participants and must be carried with the group for passing through customs.

The itinerary has a full-time schedule of three or more “People to People” interactions a day over the traditional 9-day tour. The activities touch on a wide range of topics from Cuban cooking to a political discussion with a former Cuban diplomat as well as musical performances including classical, jazz, and contemporary music. Yes, there are many activities a day, but there is plenty of time to enjoy Cuban rum, cigars, and even free evenings to enjoy private restaurants, jazz clubs, and the like. To see examples of tours to Cuba as well as prices, check out Road Scholar and Insight Cuba.

The flights to Cuba with these “People to People” tours are direct from the U.S. Most fly out of Miami or Fort Lauderdale into various cities in Cuba. My experience is with flights into Cienfuegos, Santa Clara, and Havana. In little under an hour, the “People to People” travelers have crossed the 90+ miles and will have time-traveled over 50 years without the help of the Back to the Future DeLorean.

Other ways to travel to Cuba legally, but with strict categories:

These options would allow for you to travel without a group. However, the planning is up to you. I would suggest looking into a Miami and Los Angeles based company Cuba Travel Services that assists travelers with the application process for licenses, visas, flights, and arrangements in Cuba such as accommodations, tours, and more.

So, Why Should You Travel to Cuba and NOW?

As I alluded to, a trip to Cuba is like traveling back in time. The mixture of a simple pace and lifestyle with the colorful 1950’s cars parked in front of colonial and neoclassical architecture is just the beginning. Traveling to Cuba is an experience of sensory overload with smells and tastes of the true melting pot of Caribbean. Plus, the creativity of Cuba is abound; everyone is an artist whether a musician, dancer, painter, or poet.

With changes in the government and Raul Castro’s appointment in 2006, the country is progressing rapidly. Only a few years ago, Cubans were allowed to have cell phones. Granted they aren’t Smartphones, but it is common to have a landline and cellular. Likewise, the Internet is becoming a bit easier to find, mostly in offices and hotels. Over my last trips, I’ve noticed changes such as the opening of direct mail from Cuba to U.S. without a stop in a third country as well as a change away from the array of different colored license plates signifying governmentally owned cars vs. privately owned cars. I can attest that the entrepreneurial spirit is evident through the growth of paladares (private restaurants), private movie theaters, invite-only house parties in private homes, and private tour guides.

Of course there are rumors that someday cruises will come to Havana’s port; thus, the transition of the industrial parts of the port are underway and moving to a nearby town, Mariel. Before cruises come to Cuba as well as more open travel from the U.S., you must visit. Discover some of the unforgettable parts of Cuba from my last trips:

All I can say is that one cannot or at least should not go to Cuba without taking a ride in one of these splendid 1950’s cars. With a bouquet of vibrant colors from purple to pink and metallic, these cars are a wonder, a wonder as to how they are still running. With the shortage of parts to repair these cars, most owners are very good mechanics taking parts from Russian cars or other makes to jerry-rig the cars to continue to drive them. It is a running joke in Cuba that the other name for a Cuban mechanic is a magician. I have seen firsthand that when you have a car that doesn’t have a speedometer that works or a gas gauge well you have to improvise. I guess it changes the “if it ain’t broken, don’t fix it” into “if it’s broke, but you can still drive on without it; go for it. It’s not that bad.” 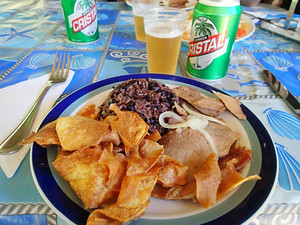 The Cuban cuisine is a mixture from all of its influences from Spanish and the colonial times to the African slave influence. The most traditional meal that is made for birthdays and of course the number one national holiday on New Year’s Eve to celebrate the triumph of the Revolution would be a roasted pig. The roasted pork in Cuba is fall off the bone, juicy, and certainly not spicy. Although many think that Cuban cuisine would be spicy, there are very natural flavors used throughout to enhance, but not overpower. You will see a lot of lime, salt, some garlic, and a concoction that uses them all called mojo. A typical side dish to accompany the roasted pig is a rice and bean dish that is called Moros y Cristianos (the Moors and Christians) to signify the colors of the rice and beans.

When in Cuba, do as the Cubans do, which means rum. The mojito is the most traditional with mint, sugar, soda water, lime, and rum. However, a good blend of America and Cuba is the Cubalibre that was developed when the U.S. Marines were in Cuba at the turn of the 20th made with rum, lime, and coke, but in Cuba that wouldn’t be Coca-Cola, but Tu Kola, similar in taste, perhaps sweeter. Another libation that most don’t know about is the canchánchara, which is the typical drink of the city and region of century. The drink is refreshing and sweet Trinidad. The rum, honey, lime, and soda water cocktail is served in a regional clay cup with a stirring stick for the honey. It’s sweet, but it has a kick.

For those that want to try Cuban beers, there are two front-runners: Crystal and Bucanero. Crystal is a lighter, traditional beer; whereas, Bucanero is a stronger, darker beer, but certainly not as heavy as other ales. The saying goes that Crystal is more suited for women and Bucanero for men, but I’ve pushed the gender limits and tried both ¡Salud!

Although Cuban music probably grew in fame tremendously after the release of Buena Vista Social Club, the country is full of musicians, dancers, artists, and just plain creativity on overdrive. There are some of the best jazz musicians that I have heard in Havana. I highly recommend the Gato Tuerto (one-eyed cat), which is located near the Hotel Nacional with a restaurant upstairs and jazz club below. It doesn’t get going until 10pm, but the music and vocals are right up this jazz cat’s alley. Also, if you want another option for an instrumental jazz location, I would suggest the La Zorra y El Cuervo (the fox and the crow). You can’t miss the door, which is marked by a traditional English telephone booth. Lastly, I would say that the Taberna Café in Havana Vieja has a good Buena Vista Social Club interactive show. It is a bit touristy, but they serve up some sharp musical chops along with three drinks during the show for the patrons. Let the mojitos, Crystal, or other flow.

Cuba is known as a photographer’s paradise, mostly because of the vibrant contrasts. With its architecture, it is no different. Throughout the country whether in the city of Trinidad, which has remained in the times of the sugar barons, to Havana, which struts the era of opalescence and recently restored buildings along side others in ruins, it’s a visual surprise around each corner. As an amateur photographer, I hope my pictures of the architecture, cars, food, and drink do justice to Cuba. If not, I challenge you to take a trip to Cuba and see for yourself.

If you have any questions about travel to Cuba, recommendations, and/or comments about your travels, please fill free to contact me on my blog www.heidisiefkas.com/blog/ or on Twitter @HeidiSiefkas

Heidi Heidi Siefkas is a freelance writer with a passion for adventure and cultural travel appropriately nicknamed Ms. Traveling Pants.

25 thoughts on “Legal Travel to Cuba for Americans and Why NOW is the Time to Go!”