Cuba is unlike any place you have ever visited. Its recent history, socio-political development, and proximity to the U.S. make it unique in the world. Cuba is also beautiful with stunning beaches, lush, tropical foliage and dramatic architecture. But Cuba’s most winning feature, what really sets it apart, is its culture reflected in the people, art and music. There is nothing quite like this magical island anywhere else in the world.

If you are thinking of going to Cuba and want to hit the key highlights, read on.

The air smells of the salty ocean that surrounds it. The Baroque-style colonial plazas are thick with palm trees and flaming red Bougainvillea. Chevys and Buicks from the 1950s cruise by the Malecon, the Havana seawall that stops the ocean from crashing onto the multicolored buildings. The sounds of mellow Latin music waft from cafes and winding, cobblestone streets. This is Havana, Cuba’s lively, friendly capital city and the first stop on your Cuban adventure.

A taxi from the Jose Marti International Airport into the center of Havana should not cost more than 25-30 CUC. A CUC is roughly equal to a US dollar.

Despite the crumbling architecture, Havana shines. It is full of pastel-colored houses with leafy interior patios. Small, niche museums are everywhere displaying posters, antiques, rum, and cigars. There is even a museum for chocolate! Art galleries are increasingly common. The paladares, private enterprise restaurants, continue to push the envelope with their innovative cuisine and the nightlife is as legendary as it ever was. Havana quickly grows on you. It beguiles, bewitches and draws you in, slowly but inescapably, with its energy and charm.

Where to stay? Avoid the hotels and book a casa particular or private home. These casas are homestays or Airbnb accommodations offered by Cuban families under a government-sanctioned private enterprise system; average price about 30 CUC/night.
If your credit cards are from U.S. banks, they won’t work in Cuba so prepaying for casa accommodations in your home country via Airbnb or a similar service- at least for the first few nights – is a major advantage. But the big draw of a casa is staying with a Cuban family and interacting with them. This experience will be one of the highlights of your visit.

There is so much to see and experience in Havana but if your time is limited, walk to the four main plazas in Habana Vieja (Old Havana), a UNESCO World Heritage site. That will give you the best feel for the city’s colonial history and culture.
Plaza de La Catedral and Plaza de Armas house some of the city’s most interesting museums, churches, architecture, and paladares. Plaza Vieja and Plaza de San Francisco are wonderful places to end your day. Here you can listen to exceptional music, people watch and enjoy a classic mojito (rum-based cocktail) on a plaza that was already ancient 300 years ago.

A couple of hours to the west are Las Terrazas and the Valley of Viñales, what many consider to be the most beautiful countryside in Cuba.

Las Terrazas started in 1968 as an ecotourism project. It is now a lush complex with tropical swimming holes, waterfalls and the ruins of 18th-century coffee plantations. The area is home to almost half of Cuba’s native birds, thrilling zip lines, an artist colony and much more. It makes for a great day trip from bustling Havana.

THE VALLEY OF VIÑALES 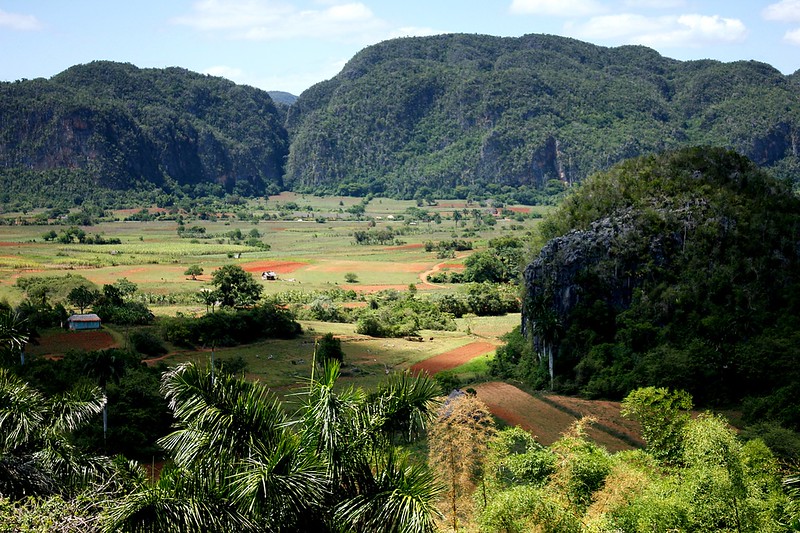 The Valley of Viñales is a UNESCO World Heritage site dotted with rolling green hills and large limestone outcrops are known as mogotes that can rise as high as 300 meters. Besides the knockout beautiful scenery, Viñales is famous as the premier tobacco-growing region of Cuba. One of the area’s big draws is a visit to the local tobacco and coffee plantations where you can sample Cuban coffee and purchase world-renowned Cuban cigars at a discount.

About two hours from Viñales is Cayo Jutia, a beach perfect for snorkeling. You can also accept a local fisherman’s offer to sail to outlying islands for fresh seafood.

Viñales is also known for underground river tours through local caves, many of which run for miles. But the highlight of a Viñales visit is nighttime and the music and dance venues that line Cisneros Street, the main drag.

Cienfuegos (the name translates into one hundred fires) is an elegant city in central Cuba settled in 1819 by French immigrants from Bordeaux and Louisiana. The architecture is an unlikely mingling of Baroque, Moorish and Gothic styles, giving the city the air of a town in Southern France in the early 20th Century. The central plaza, Jose Marti Park, is considered to be the most beautiful in Cuba.

Cienfuegos’s impressive architecture even extends to its main cemetery, La Reina, declared a national monument in 1990. The statuary is outstanding and the local caretaker will happily provide a tour of the most significant monuments for a small tip. Don’t miss the legend of the beautiful Sleeping Beauty.
Other can’t-miss activities in Cienfuegos include a visit to El Nicho for a refreshing dip in the swimming holes fed by waterfalls. A round-trip taxi will cost you 30 CUC including waiting time.

Two tried and true restaurants serving authentic Cuban food in town are Dona Nora on Paseo del Prado and Te Quedaras in the city center.
Not far from Cienfuegos are the interesting colonial towns of Jibara and Santa Clara. Nearby are the honey-colored beaches of Guardalavaca and Playa Pesquero. Cienfuegos’s proximity to these locations makes the city a good base from which to explore the charms of south-central Cuba.

Less than an hour from Cienfuegos is the beautifully preserved colonial town of Trinidad. The city was founded in 1514 and declared a UNESCO World Heritage site in 1988. Visiting Trinidad feels like time-traveling back to the colonial period.

The best way to enjoy Trinidad is to check into a local guesthouse which could be in a refurbished 19th Century mansion and have a tropical breakfast in the shady interior patio amidst the sounds of crowing roosters and the aroma of Cuban coffee.

If this experience is not sufficiently authentic for you, you can witness a Santeria (an Afro-Cuban religion) dance performance, take salsa classes or dance in music venues in underground caves. You can also hike through abandoned historical sugar plantations at Valle de Los Ingenios, another UNESCO World Heritage site.
History buffs will enjoy wandering the central Plaza Mayor with its remarkable collection of 17th-century structures, museums, and cobblestone streets.

Like any self-respecting Cuban town, Trinidad also boasts a spectacular beach nearby. Playa Ancon is just 20 minutes away by bus. Here you can rent a small boat and explore surrounding uninhabited islands or snorkel around some of the most pristine reefs in the world.

Santiago, Cuba’s second most populated city was founded in 1515. The city is often referred to as the capital of the Caribbean. Although frequently overlooked by travelers focusing on the Havana circuit, Santiago de Cuba is well worth at least three or four days to do it justice.
The city has a tropical colonial vibe different from other Cuban towns. It is a sultry and vibrant mix of Spanish, Haitian, French and African cultures nestled on a wide bay surrounded by red-tiled rooftops and winding colonial streets.

Many significant battles in Cuba’s turbulent history took place in Santiago. The city is packed with museums from the colonial, revolutionary and contemporary periods. One highlight is the Castillo de San Pedro de la Roca, known as El Morro, another UNESCO World Heritage site. This 17th-century fortress was constructed to defend Santiago from pirates and is a remarkably well-preserved example of Spanish-America military architecture.

Another can’t-miss site is the recently renovated 16th Century Catedral de Nuestra Senora de la Asuncion (Our Lady of the Assumption) in the town’s central plaza. Other gems include Casa Velasquez, the oldest standing house in Cuba and the Sanctuary of La Virgen de la Caridad (Our Lady of Charity) Cuba’s patron.

Just outside of town is the cemetery of Santa Efigenia, the final resting place of Cuba’s presidents, military heroes and other dignitaries. It is worth spending a couple of hours strolling the blindingly white marble walkways among the historical mausoleums and watching the changing of the guard.

These descriptions of what awaits you on a visit to Cuba barely scratch the surface. You will remember your visit to Cuba for a long time to come.

Talek Nantes is an author, travel consultant and founder of the travel blog, travelswithtalek.com. She is a passionate travel enthusiast and enjoys sharing her travel experiences with others. In her blog, Talek shares information on unique destinations and provides actionable travel tips and advice to help travelers make the most of their time away from home. Her focus is on cultural immersion and interaction with local people to help travelers create their own unique travel experiences. Her work has appeared in several publications.
Talek’s personal and professional background has led her to travel to over 100 countries. She has lived and worked throughout the world and speaks several languages. Talek is a graduate of the University of Pennsylvania and lives with her husband in New York City and Miami.

4 thoughts on “Highlights of Cuba”