For the second year in a row, I’m posting the list of my most memorable hotels of the past year.

As before, this list isn’t necessarily a list of the “best” hotels. I don’t go out of my way to find hotels to review and I’m not a hotel reviewer. I don’t have a checklist that I go through in each location. My list ranges from luxury hotels to youth hostels. I would recommend all of the properties listed, but often for very different reasons. I stayed at least one night in every one of the locations listed. Simply visiting a hotel is not sufficient to get put on the list no matter how cool the hotel might be.

My choices when I look for accommodations are almost always pragmatic. I don’t really care about luxury rooms and usually just want something clean with good internet. Some of these were paid for by myself and some of them were comped. The vast majority of comped rooms I got did not make this list.

Without further ado, here are my most memorable hotesl of 2012! 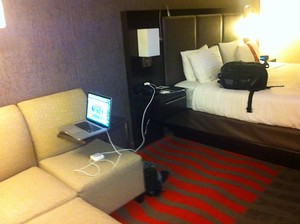 I wasn’t even supposed to stay here. I missed my flight to Barcelona back in September because my flight from Denver was delayed. Rather than take a different flight on another airline and risk getting separated with my luggage, I opted to just take the same flight the next day. That meant I had to find a place to sleep that night. I picked the Newark Airport Holiday Inn just because it was close to the airport and they had an airport shuttle. I had no expectations for the room.

I was floored by how great the room was. The room scored well on almost everything I look for in a hotel room. A great desk with a chair. Electrical outlets in easy to reach places. Free internet. The room had clearly recently been refurbished as everything was new. What impressed me was the amount of thought that went into all the little things in the room. They clearly designed it with 21st Century travelers in mind. The sectional couch had outlets so you could easily sit down with your laptop while watching TV. They even had USB ports available to charge devices.

So, yes, my 2012 hotel of the year was an airport Holiday Inn in New Jersey. If every Holiday Inn was like this one then I’d frequent them all the time. Sadly, they are not.

I first stayed at a Four Points hotel back in 2011 when I had to stay a few days in Los Angeles. I wanted something reasonably affordable and near the airport, so I stayed at the Four Points LAX. I was surprised at the quality of the hotel vs what it cost. It was one of the better values I’ve seen in a hotel. It was a great business hotel and when I had a problem with their internet I complained about on Twitter, they responded very quickly to solve it. (and I freely admit that having a lot of Twitter followers might have helped with that).

Since then I’ve stayed at Four Points hotels in Halifax, Barcelona and several other cities. The experience I get is consistent and the prices are usually reasonable. I know I’ll get decent bandwidth, a good desk and a decent bed. If I am flying into a city and don’t have a place to stay, I will usually look to see if there is a Four Points in the city.

This wasn’t a big year for staying in luxury hotels for me. Easily the most luxurious room I stayed in this year was The Palazzo in Las Vegas. The room was huge and the furnishings were top notch. The bathtub was also large, which is actually a big deal for me. When I’m in Vegas I usually stay in very cheap places in Vegas but I got the room comped so like any high roller (actually, I don’t gamble), I took it. Even though most Vegas hotels design their rooms so to encourage to get out and spend money, I was able to work in the room just fine. Internet wasn’t free, but Vegas is one of the few places I give a pass on that.

When I stayed at the Fairmont at the Vancouver Airport, I spent 15 minutes waiting for a hotel shuttle that never arrived. The reason, as I soon found out online, is that they don’t need a shuttle. The hotel is literally inside the airport. It is by far the nicest hotel I’ve ever stayed at that was inside or attached to an airport. One thing I like about Fairmont Hotels is that if you are a member of their President’s Club loyalty program (cost is free) you get free internet in all their hotels. The Fairmont YVR had the fastest internet I’ve seen in any hotel, which is why it made my list. Also, it is a great option for a layover if you are in Vancouver.

Los Paitos was my favorite stay during my trip through Andalusia. The room here was nothing special. It was small and bare bones. What made this place special were two things: 1) the central inner courtyard which was a restaurant, and 2) the location directly across the street from the Cordova Cathedral bell tower. It was exactly what you’d expect when looking for a classical Andalusian experience. Oh yes, it was also very affordable.

Technically, a ship isn’t a hotel. Nonetheless, I spent 18 days aboard the Expedition when I visited Antarctica in January. I had never slept on a ship before, so I was expecting navy type bunk beds. It turned out to be much nicer than I had hoped. I had a small portal window, a reasonable amount of room (for a ship) and a small shower that had working hot water. Moreover, the hotel staff on the ship was great and took care of me when I was seasick. …And of course, G Adventures is one of my sponsors.