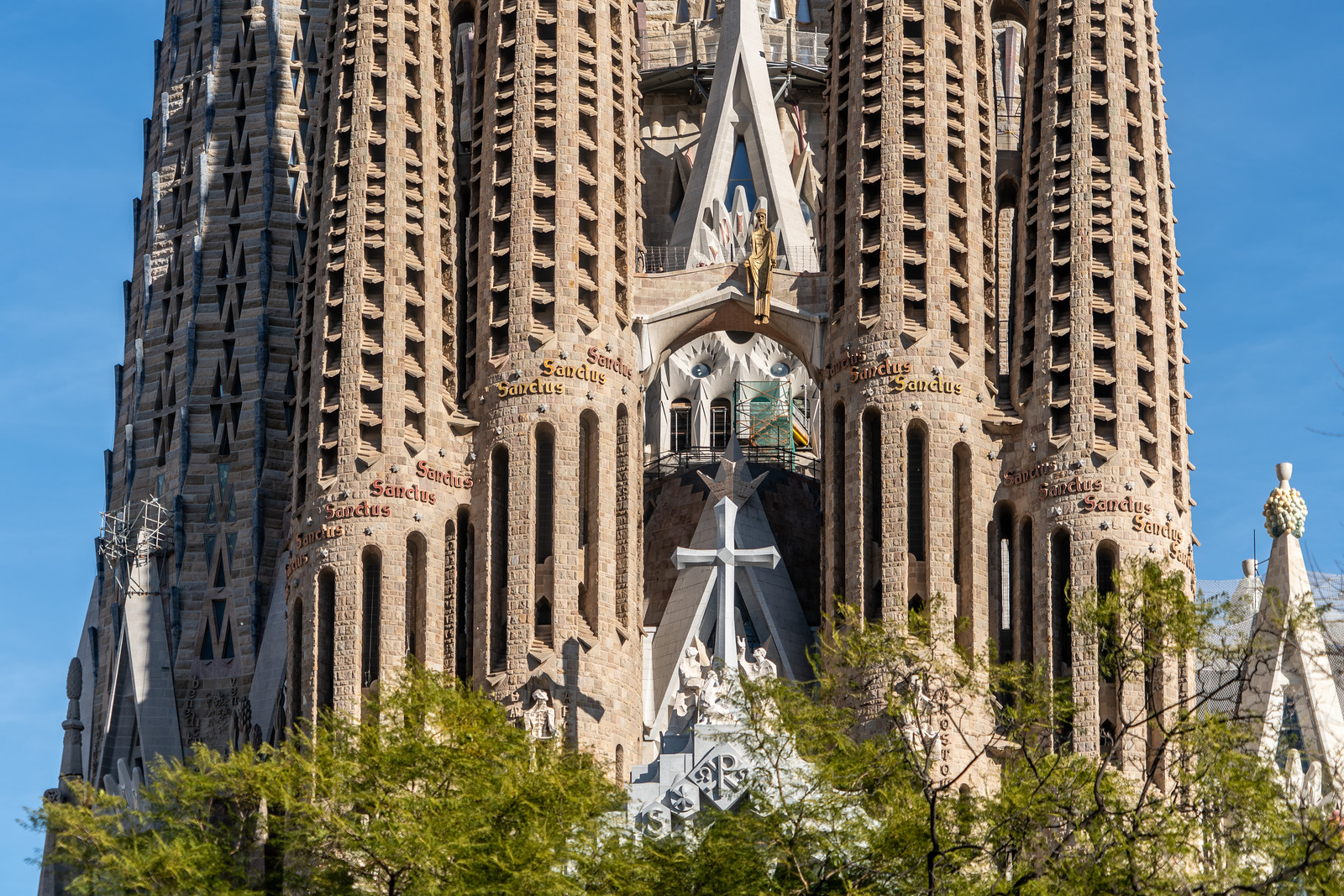 Antoni Gaudí is almost synonymous with Barcelona. The architect was a visionary with an outsized impact on the architecture and building technology of the early 20th century. La Sagrada Familia is Gaudí’s signature building in Barcelona, and it’s been under construction for almost 130 years. Despite the size and scope of this basilica, it’s not a cathedral, but actually a private church designed for a single-family.

The Sagrada Familia is just one of the buildings inscribed in the UNESCO inscription for the Works of Antoni Gaudí. When traveling to Spain and visiting Barcelona, there are a number of historic and remarkable Gaudí buildings worth visiting. We’ll dive into the best Gaudi architecture in Barcelona, the significance of each place, which is worth the price of admission, and how to tour the city’s best Gaudi buildings either on a self-guided tour through the city, or strategically using day tours to get the most from your visit.

The Works of Antoni Gaudí is a UNESCO World Heritage Site in Spain known for its collection of highly artistic and unique designs. The buildings by Architect Antoni Gaudi reflect the Art Nouveau style movement in architecture. Seven buildings in total were recognized into this collection of architectural works, which were constructed from the 19th to the 20th centuries.

From the World Heritage inscription for the Works of Antoni Gaudí:

Seven properties built by the architect Antoni Gaudí (1852–1926) in or near Barcelona testify to Gaudí’s exceptional creative contribution to the development of architecture and building technology in the late 19th and early 20th centuries. These monuments represent an eclectic, as well as a very personal, style which was given free reign in the design of gardens, sculpture and all decorative arts, as well as architecture. The seven buildings are: Casa Vicens; Gaudí’s work on the Nativity façade and Crypt of La Sagrada Familia; Casa Batlló; Crypt in Colonia Güell.

Gaudí’s fingerprints are seen all over the city of Barcelona, not just in the seven works listed on the UNESCO inscription. That said, those seven works are some of the grandest, imaginative, and representative of what Gaudí brought to the city. Several of the key works lie within walking distance of each other, which makes for an easy self-guided tour of the works. Others are a bit further out—but still either walkable within 30 minutes, or easily accessed by Barcelona’s well-developed metro and bus system.

Note that every site has its own entrance fee, and in the high season you absolutely must book your tickets beforehand to the top sites (La Sagrada and Park Guell specifically, although all of them to be on the safe side). If you’re very keen on history, a Gaudí themed walking tour is the best way to learn the insider history and inspiration behind each site, as well as the best way to find those Gaudí buildings hidden on side-streets and plazas across the city. Three walking and segway tours worth considering include:

The Basilica de la Sagrada Familia is one of the most popular entries in the list of the Works of Antoni Gaudí. This Roman Catholic Church is located in Barcelona and it features a Modernisme architectural style—its groundbreaking was in 1882. To this day, this church is still under construction with target completion in 2026.

The original architect for this project was Francisco Paula de Villar until Gaudi took over following de Villar’s resignation. It was during this time that Gaudí transformed the architectural and engineering style of the basilica. Under Gaudí’s hand, it now showcases a combination of Gothic and Art Nouveau architectural elements.

Due to the Spanish Civil War and the project’s reliance on private donations, the progress of its construction has been slow. Nonetheless, even the greatest artists in the world consider the Sagrada Familia as one of the most beautiful architectural works, and best interpretation of Gothic Architecture since the time of the Middle Ages.

Getting to La Sagrada Familia: This Gaudí work is located about 30 minutes on foot from the Gothic Quarter and is usually best combined with a trip to Park Güell, which is relatively close. Metro Lines L2 and L5 stop at the Sagrada Familia Station, or you can use the address (Mallorca Street 401, 08013) to find the best bus route from your location in the city.

Touring La Sagrada Familia: It cannot be overstated enough that you must book your tickets ahead of time. You can do so on the official website, or I recommend buying a fast-track pass or skip-the-line guided tour—both of these options will help you bypass the heaving thousands of tourists visiting the site each and every day.

Casa Vicens is a modernist architectural building in Barcelona, and one of the seven Works of Antoni Gaudi recognized by UNESCO. This building was deemed as one of the first to exhibit the Art Nouveau style, and is among one of Gaudi’s first creations. The creation of this building was a breakthrough because Gaudi showcased what many architects before him haven’t been able to do—a perfect mix of different architectural styles. In doing so, he broke away from tradition and created a new language of architecture that also helped carve out his name as one of the best architects to come out of Spain. Once built as a summer home, it’s now a museum with permanent exhibitions and is located in the Gràcia neighborhood of the city.

Getting to Casa Vicens: Unless you’re already at Casa Batllo or Casa Mila, you’ll likely want to take the metro or bus into the Gàcia neighborhood rather than walk it. The L3 line runs to Fontana, and it’s a short walk from there. To map it from your location, use the address: Carrer de les Carolines, 20-26, 08012

Visiting Casa Vicens: You can by admission to the museum when you show up, or book one of the affordable guided tours for the full context behind Gaudí’s first work in the city.

Palau Güell is a mansion also included in the Works of Antoni Gaudi in Spain. He designed this mansion for industrial tycoon Eusebi Güell during the late part of the 19th century. The mansion is located in the El Raval neighborhood within the city of Barcelona. This home features a main room wherein the high society guests were welcomed. Some of the most notable details about this mansion include forged ironwork, parabolic arch, ornate walls and ceilings, and the iron gates. In 2004, this mansion underwent renovation as some of the original components had become weak. Hence, it was momentarily suspended from public visits, but it was reopened to the public in 2011.

Getting to Palau Güell: If you’re staying near the Gothic Quarter you can easily walk to this Gaudí site, which is located just off La Rambla in the Raval quarter. Otherwise, take the metro line L3 and get off at Liceu. To map it from your location, use the address: Carrer Nou de la Rambla, 3-5, 08001

Touring Palau Güell: Given this building’s proximity to all things touristy in Barcelona, combine a visit to Palau Güell with a visit to the Boqueria and a stroll along the rambla. Opt for a guided visit filled with insider tips and optional tapas if you’re either short on time or big on learning local history and culture.

Park Güell is a public park system located on Carmel Hill in Barcelona. Like the others, this is also a UNESCO listed Work of Antoni Gaudí. The park is comprised of gardens and architectonic elements, and it has sweeping views of the city and down to the water, which is also why it is a popular destination for tourists. Eusebi Güell, the same tycoon who commissioned Gaudí to design his home, also tapped the famed architect to develop this park with urbanization in mind. The work for the park lasted from 1900 to 1914, but it was not officially opened to the public until 1926. Today, the main park showcasing Gaudí’s works require a ticket (and they sell out fast throughout the spring and summer).

Getting to Park Güell: The park is located a bit above the city, so walking there is a bit of an uphill hike. It’s likely too far to walk from the Gothic Quarter, but ambitious or budget travelers could make the walk from La Sagrada Familia. For all others, the metro line L3 stops nearby at either Lesseps or Vallcarca. The bus, however, is the only option that takes you right up to the entrance and involves no steep hill walks (bus lines D40 and H6 stop at the park). To map it from your location, use the address:  Carrer d’Olot, s/n, 08024

Visiting Park Güell: It’s easiest to combine this park with a Sagrada tour, or you can book a fast-track guided tour of the park. To go totally independent and more budget, book your ticket directly on the city’s website.

Casa Batllo is another of the remarkable Work of Antoni Gaudi that made it to the list of UNESCO World Heritage Sites in Spain. It’s one of the most popular buildings in Barcelona and Gaudi’s most well-known work (besides the Sagrada Familia). The building is a remodeling of a former house that was refurbished. It’s known locally as Casa dels Ossos, which means House of Bones—a name derived from the visceral and skeletal organic quality of the design for the building.

Casa Mila is another Guadí work recognized by UNESCO. This modernist building is also located in Barcelona, and it’s just a short walk from Casa Batllo. Guadí was commissioned by business Pere Mila in 1906 to create the design for this building, which was built from 1906 to 1910. This Guadií work is distinguished for its unique stone façade and twisting wrought iron windows and balconies. It’s also known as La Pedrera, so don’t be confused if you see it referred to as one name or the other.

Completing the list of the Works of Antoni Gaudí in Spain is the Church of Colonia Güell, one of Spain’s unfinished Works of Antoni Gaudí. The building was initially designed as a place of worship for those living within the Santa Coloma de Cervelló suburb of Barcelona. It was also commissioned by Eusebi Guell, but his dwindling wealth has resulted in the project being halted. To this day, only the crypt was erected from the entire project, and for that reason online information usually refers to the site as Guadí’s crypt rather than the name of the church.

Planning Your Trip to Barcelona